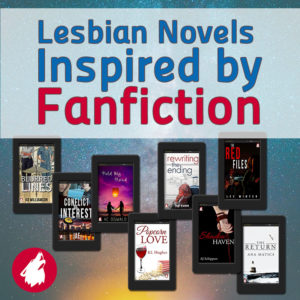 Fanfiction has given millions of readers escapist fun as characters from their favorite shows get re-imagined by amateur writers in infinite ways. Sites such as Archive of Our Own and Fanfiction.net, to name the two biggest, get millions of hits a day. And it’s not surprising why.

Fanfiction is free. It can be a thrilling revelation when you find a talented new fanfiction writer. Also, it will pair up virtually any characters, usually within limits, so no matter how exotic your tastes, odds are you’re catered to. Communities spring up around fan-fiction pairings, creating a sense of belonging.
But most of all, fanfiction is a fantastic outlet for queer fans, especially, who are so often denied same-sex love in their entertainment. At last, they can experience the fantasy of the characters they “ship” together in finding romance or adventures.

There’s a reason same-sex fanfiction in many fandoms outnumbers straight fanfiction. If a straight couple is already fulfilling all a fan’s fantasies on-screen, there’s usually a far less burning urge to create stories or devour them later. In other words, the itch is scratched. And that itch gets scratched astronomically more often for straight people.

That’s where the fanfiction writers come in – if all one gets is a series of smoldering looks as, say, the sexy local mayor has heated eye-sex with the blow-in soft-butch sheriff, maybe, just maybe, sixty zillion lesbians will start feverishly penning fan fics about them falling in love. Or into bed. (Cough, SwanQueen, cough.) And that’s a wonderful thing. It may not be a substitute for what’s on the screen, but still, those itches are getting scratched a lot more than before.

Fanfiction hasn’t just been a great ride for readers. It’s been an incredible opportunity for fledgling writers to learn and grow their skills, and in some cases, even become published authors. And, sometimes, those classic fanfictions they penned which gained legions of fans, will even get turned into books as well.

Ylva Publishing has been a massive supporter of talented fanfiction writers becoming novelists. And before you think all there is to adapting a fanfiction is to do a “search-replace” on all the names to avoid copyright, that’s not even close. A book has to be an original story, and so fanfiction writers turned authors make completely new worlds and fill them with characters who carry the essence of their origins, but aren’t the same as already exist.

Bag a bargain on Suits, Sass, and Free Spirits

In honor of the awesomeness that is fanfiction, Ylva has declared October Fanfiction Theme Month. That means discounts for sixteen of our books that had their germination as a fanfiction, or in one case, was perceived to be a fanfiction in a tiny Mandela effect! You can nab a book on sale here.

Here are eight titles of the sixteen that we’ve dubbed “Suits, Sass, And Free Spirits” to get you started.

If you liked Rizzoli and Isles, you will love: Blurred Lines by KD Williamson

Who didn’t want brash Detective Rizzoli and sophisticated chief medical examiner Maura Isles to hook up after a case? Or during. Hey, we weren’t fussed.

Blurred Lines by KD Williamson: Wounded in a police shootout, Detective Kelli McCabe spends weeks in the hospital recovering. Her only entertainment is verbal sparring matches with Dr. Nora Whitmore, the talented and reclusive surgeon. Two very different women living in two different worlds. When the lines between them begin to blur, will they run from the possibilities or embrace the changes they bring to each other’s lives?

If you liked Law and Order: SVU, you will love: Conflict of Interest by Jae

Book one in the Portland Bureau Series includes a character with a similar vibe to a certain ovaries-melting Detective Olivia Benson, who’ll warm hearts of fans of Law and Order: SVU.

Conflict of Interest by Jae: Detective Aiden Carlisle isn’t looking for love, especially not at a law enforcement seminar, but the first lecturer isn’t what she expected. After a failed relationship, psychologist Dawn Kinsley swore to never get involved with another cop, but she immediately feels a connection to Aiden. Can Aiden keep from crossing the line when Dawn becomes the victim of a brutal crime?

If you liked Once Upon A Time, you will love:

What is it about that former evil queen-turned-bitchy mayor and the in-your-face sassy sheriff who got SwanQueen fans so hot under the collar? These books will stoke that chemistry anew.

The Return by Ana Matics: Near Haven is like any other fishing village dotting the Maine coastline—a crusty remnant of an industry long gone, mired in sadness and longing. Liza thought she’d gotten out, escaped on a basketball scholarship, but a series of bad decisions has her returning home after a decade. She struggles to accept her place in this small town, making amends to people she’s wronged and rebuilding her life.

The Red Files by Lee Winter (Note: this wasn’t a fanfiction but is believed to be one by so many OUAT fans that we’re including it!): Ambitious journalist Lauren King is stuck reporting on the vapid LA social scene’s gala events while sparring with her rival—icy ex-Washington correspondent Catherine Ayers. Then a curious story unfolds before their eyes, involving a business launch, thirty-four prostitutes, and a pallet of missing pink champagne. Can the warring pair join together to unravel an incredible story?

If you liked Glee, you will love: Hold My Hand by AC Oswald

There was so much angst between high-school lovers Brittany and Santana that it’s little wonder fans were keen for more. But different. And better written. Like this, for example!

Hold My Hand by AC Oswald: When Bethany and Savannah split up, Bethany is heartbroken. But a year later they meet again and their feelings are as strong as ever. So why did Savannah leave her? Bethany is devastated by the answer and realises she will lose Savannah again—to cancer. In a world where time is fleeting but love lasts forever, Savannah and Bethany can only hold each other and live their dreams.

If you liked Grey’s Anatomy, you will love: Rewriting the Ending by HP Tune

Calzona fans may experience melting into puddles over this AU, which asks what if you met a cute stranger in an airport, instead of say, a hospital in Seattle?

Rewriting the Ending by hp tune: Juliet is an author with a big deadline, a ratty old backpack, and plans for Belgium. Mia has a one-way, first class ticket to anywhere. A chance meeting in an airport lounge leaves them connected. But how do you forge a future when the past keeps pulling you back?

What are you waiting for? Get reading!