Imagine your favourite characters pulled into a universe almost exactly like their own, except in this one, instead of English, they speak German, Italian, Spanish. This is a brave new world where stories are being opened up to a global audience, a world where your favourite authors like Harper Bliss and Tig Ashton get the translation treatment. As-Welsh-as-they-come Poppy Jenkins waxing on about boob appreciation in German? Klingt gut!

In my excitement, I turned to veteran publisher and all-round knower of book things, Astrid Ohletz to answer a few questions I had about what we can expect from lesbian fiction translations. 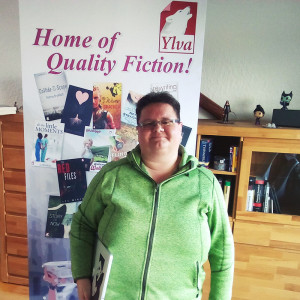 A lot of work and money goes into a quality translation. First of all, you have to pick the right book for the right market. Lesbian fiction is a niche market and you need to sell a certain amount of copies to make a profit. For example, a book about a lesbian U.S. footballer will not sell enough copies in Germany to at least cover the costs while a book about a lesbian soccer player might. Hardly anyone in Germany is interested in U.S. football. It’s about understanding the niche in the market.

And then there is the title of the book. Often enough you cannot simply translate a title into another language. Oh, and btw, in Germany every title can only be used once. We have a law about this. So titles have to be carefully considered.

After the translator does the translating, an editor comes in to smooth it all out, and then there’s the copy editor who looks for structural issues and so on. It takes a team and readers are very aware of what a good translation is and what not.

What sort of translations does Ylva do?

A lot of our own English books have been translated into German. We’ve translated one book into Italian and one into Spanish. Another book is just being translated into Italian and the second book has been translated from English to German this year. We’re known for producing quality translations, which is gratifying. But the whole translations process is very expensive if you’re aiming for quality. And so, we have to be very careful to pick the right book for the market.

We also opened up our German publishing branch for translations of self-published books. Next year Tig Ashton’s Poppy Jenkins will be published in German. And we signed with Harper Bliss for a couple of her books.

How has the book market changed when it comes to translations?

Up until fairly recently, publishers only published work in own language. Publishers bought licenses from an author’s agent or another publishing house, if they wanted to publish a book first translated in another language.

Globalization however changed that. With so many platforms available to sell books all over the world, publishers and self-publishers don’t need to concentrate only on their own country/language. They can sell books with Amazon, Kobo, Apple and others worldwide. And in other languages.

However, there is still the problem of finding readers for translations. For example, it’s much harder to sell German books to the English market than the other way round.

Why do you think that is?

Honestly, most of the book market is U.S.-centric. A German book finding a major publishing house is rare. It happens. But I guess put into numbers it would be like 5% German books are translated into English while the German bookshops are full with translations from other languages.

So, you’ve mentioned that more and more Germans do buy books in English? That’s weird.

The other thing is that English books are simply cheaper. In Germany, we have a fixed book price, which means that sellers are bound to a specific price and it’s very hard to lower it or offer discounts for the first two years after publication. Prices for English books, however, can be changed easily. So, they’re cheaper and more likely to be purchased. Plus, I can easily buy a reduced English book on Amazon and don’t have to wait until a German bookshop or platforms reduces something.

Astrid Ohletz is CEO of Ylva Publishing. Being able to publish books where subtext is maintext is a dream come true for Astrid. In her free time, she writes stories under the pseudonym Emma Weimann

July 2018 is Breaking the Language Barrier month at Ylva, and we’re celebrating all our novels that have been translated into a different language. Find out more about luscious ladies who love the ladies, no matter what language they’re speaking. To check out which of our books have lesbians around the world excited, click here:
www.ylva-publishing.com/current-deals