Found in Translation: The Funny Side of Language Mishaps 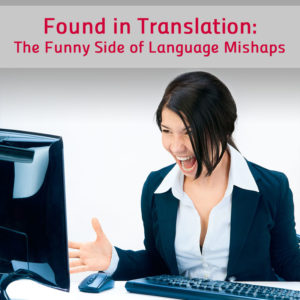 Languages can be a minefield. It’s hard enough mastering one, let alone telling stories in a different tongue. Obviously translators don’t always get it right and there are so many things that can go wrong with foreign languages…or right, if you love a laugh.

I once poked my book title, Requiem for Immortals, into a translation app, flipped it to German and back to English a few times to amuse myself, and it eventually came out as Requiem for Sorcerers.  How very Harry Potter. Not surprisingly, my professionally translated book has an entirely different title in Germany, Requiem mit tödlicher Partitur (Requiem with a Deadly Score). It sounds way less “You’re a wizard, Natalya.”

It may not seem such a big deal to some people, but translations in books especially, really matter. Doing it right and doing it well is not just important, it’s essential. It can change something from art to substandard, or from shocking to good. Or in some cases, something beautiful to something oddly mechanical.
And when you translate badly, perhaps cheating using a free online service, it’s always evident. You have nowhere to hide. No, seriously. It’s so, so obvious.

Getting it so bad it’s funny

A fine example of dodgy DIY translating came five years ago when a would-be thief hacked my eBay account and started trying to buy hi-tech stuff on German eBay in my name. The first clue it was happening came when one smart German seller decided it was weird that a random Aussie woman was buying all his gear in bulk. So he messaged me something in German.

I put his message through Google Translate. Oh, right, okay, he wanted to know did I really mean to buy six of his laptops when I was in Australia?

I frantically tapped into Google Translate that I’d been hacked by some lowlife (the exact furious verbiage escapes me now), then converted it to German, and sent him that translated message.

Five long minutes went by, involving, I assume, some German guy helpless on the floor with laughter, before he replied in perfect English (how do so many Germans know perfect English, anyway?): “Did you intend to write words that mean, ‘An unknown bastard of low merit pretends to be my body without consequence?”

Um. Yeah? I kind of did. Much hilarity between us ensued before eBay froze my account to examine several suspicious transactions, and, alas, I didn’t get to farewell my new best Kumpel.

Given I don’t pretend to be a pro at translations, I’m totally allowed to be a funny dork when I give it a go. That doesn’t excuse actual translation experts, though, allegedly trained in the fine art of foreign tongues, for giving us unintentional hilarity.

When pros mess with TV and film

When I asked my Facebook followers to share any translating mishaps they’ve seen in writing and entertainment from around the world, the replies came in thick and fast. While I cannot verify their accuracy, for amusement sake I hope they’re all true. Here is a selection of them:

* Die Hard: With a Vengeance is called Die Hard – Mega Hard in Denmark.

* In France, when they made the French version of The Shawshank Redemption, they called it The Escapees, which spoiled the end.

* Die Hard was translated as Crystal Hell in Italian.

* The ‘90s TV series Saved by the Bell was California High School – Stressful Break And First Love in German.

* In Italy, Disney’s classic The Parent Trap was translated as The Cowboy with the Bride’s Veil.

Not all translations were accidentally hilarious. Some were deliberately sly. On a CSI episode, Jim Brass says in English: “Nothing sounds good in German.” In the German version he says: “The Germans wrote everything.”

That’s the thing with translations, in books, signs, titles, songs, or anything, really, they’re only as good as the translator. A translator has so much power to correct, tweak, or create new meanings, as well as inject their own sensibilities into what we read.

Art or awful: The supreme power of translators

An example of this power lies in the different translations from Bonjour Tristesse by Françoise Sagan. The Observer’s Rachel Cook notes, that the original translation from the French by Irene Ash begins, “A strange melancholy pervades me to which I hesitate to give the grave and beautiful name of sadness”.

In the Heather Lloyd translation of the same passage, it reads, “This strange new feeling of mine, obsessing me by its sweet languor, is such that I am reluctant to dignify it with the fine, solemn name of ‘sadness’.”

Chalk and cheese takes. Or should that be craie et le fromage?

Well-executed translations really are like fine fromage. Something to be savored and appreciated, over and again. And bad translations are like chewing on craie. One taste and you’re done. Translators easily make or break their art.

So what’s the bottom line? If you’re buying a translated book, or you’re an author getting one translated, you want to ensure you’re getting the good stuff, courtesy of a publishing house with foreign-publishing credentials, or a highly qualified translation expert. Not something Google Translate thinks is close enough. Because while all those online robo-translators and the prolific cheap-as-chips translation services are good for a laugh, they’re not good for much else.

Well, except for getting a German businessman to cancel your unauthorized order for six laptops. And for that I am profoundly grateful.

July 2018 is Breaking the Language Barrier month at Ylva, and we’re celebrating all our novels that have been translated into a different language. Find out more about luscious ladies who love the ladies, no matter what language they’re speaking. To check out which of our books have lesbians around the world excited, click here:
www.ylva-publishing.com/current-deals