A Jew’s Christmas in Manhattan 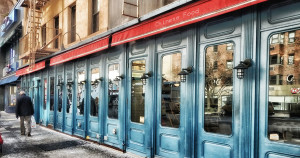 In Manhattan, where I live, Chinese restaurants are mobbed on December 25th. This is because in days past these were the only restaurants open on Christmas. The other establishments open that day were movie theaters. And so it became a holiday ritual for Jews to take in a movie followed by a serving of General Tso’s chicken and fried rice.

It’s nice to have something fun to do on a day when many of the people you know are engaged in Christmas traditions that they have observed since childhood.

I grew up in what is now referred to as an interfaith family. My father was Catholic, my mother Jewish. By agreement, though, I was raised Jewish. And while we participated in the Christmas celebrations of relatives on my father’s side, my mother remained adamant that this was not our holiday. My easygoing father made very few demands. I do remember having a tiny silver Christmas tree in one street-facing window of our apartment and an electric menorah in the other. That arrangement seemed fitting since it acknowledged that Christmas was indeed my father’s holiday.

So then what about Chanukah? Over the years there’s been an effort to increase its visibility and importance as a kind of “Jewish Christmas” complete with a “Chanukah bush” and excessive gift-giving over an eight-day period. But in reality, Chanukah, which commemorates the miracle that a vial of oil only sufficient to last for one day burned bright for eight, is a relatively minor holiday on the Jewish calendar. And when it comes to gifts, the tradition is to give small presents each night along with a few pieces of gelt (chocolate coins). 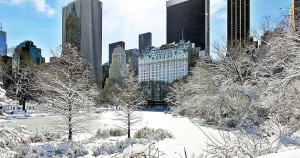 Nevertheless, when you are a member of a relatively small minority living within a larger culture, you make a choice to either separate, like some ultra-Orthodox Jews, or to assimilate. What varies among most Jews in the US is the degree of our assimilation. In my case, I’m happy to listen to Christmas music (Carole of the Bells is my favorite), eat the sugar cookies my co-workers and friends bake, take in the fresh smell of the pine trees that vendors line up on New York City streets, and ooh and ahh over the holiday store windows on Fifth Avenue.

I’ve made my peace with Christmas, taking from it what I enjoy and not worrying about the rest.

I have to say though, there was one year that Christmas was completely absent from my life and I can’t say I wasn’t a bit relieved. That was in 2009 when I went on a 10-day trip to Israel with my synagogue. We were in Tel Aviv, the country’s most cosmopolitan city, and there were no red and green lights, no decorated trees, no crowds in the stores. It wasn’t exactly a feeling of freedom from the oppression of a dominant culture. I wouldn’t go that far. But it was a brief glimpse of what it might be like to not be a minority in a Christian world.

Even so, the following December, it was good to be home again and walk Manhattan’s streets, looking for an open table at a Chinese restaurant on Broadway.

Cindy Rizzo lives in New York City with her wife, Jennifer, and their three cats. Cindy serves on the boards of Congregation Beit Simchat Torah, and SAGE (Services & Advocacy for GLBT Elders). Her first book, Exception to the Rule, won the GCLS Debut Fiction award. Cindy’s short story, The Miracle of The Lights, published by Ylva, highlights the difficult choices faced by two ultra-Orthodox Jewish teens. Her most recent novel, Getting Back, was also published by Ylva.