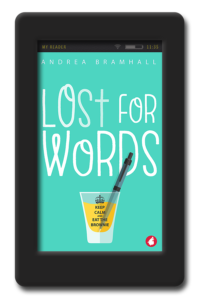 Lost for Words by Andrea Bramhall

A bittersweet lesbian romantic comedy by award winning author Andrea Bramhall about the fun of never knowing what life will bring.

Sasha Adams has it all. Fulfilling career, loving family, great friends, and… Who’s she kidding? She lives at home with her aging mother, Fleur. She works as a massage therapist, and spends all her time with her best friend, Bobbi. But damn it, she’s happy. Well, okay, maybe not happy, but she’s content. It’s enough. Until the well-meaning but meddlesome women in her life, Fleur and Bobbi, team up and enter Sasha into a writing competition with the potential to change her life.

Film producer and director Jac Kensington has the career she’s spent thirty years honing to perfection, with little thought to her personal life. She helps run an annual scriptwriting competition in search of new talent and projects for her company to produce.

Meddling might have brought Jac and Sasha together, but fate has plans of its own. Sasha’s life is on the brink of changing beyond all recognition in this bittersweet lesbian romantic comedy.

7 reviews for Lost for Words by Andrea Bramhall