Daughter of Fire: The Darkness Rising (audiobook) by Karen Frost

Book two in the Destiny and Darkness series

This thrilling sequel to Daughter of Fire: Conspiracy of the Dark offers a fast-paced, captivating conclusion to the Destiny and Darkness series, a fantasy novel for young and old.

Not three months ago, I’d been a daughter of the Ice Crown, the lands of snow and ice. Everything I had, everything I was, existed in a tiny world of its own, a single snowflake in a snowstorm. And then, like a candle blown out by careless lips, all of it had been extinguished in an instant.

The kingdom is under threat. A secret, desperate plot to change the course of history has been hatched in dark rooms.

Aeryn, a young student war mage from an isolated land of ice, has the powerful gift of fire. To save her world, she must draw around her a small group of fellow mages and allies at Windhall University. At her side is the beautiful healer in training, Lyse, who holds her heart. In front of her is nothing but questions, fears, and impossible decisions.

Conspirators are everywhere, shifting shadows that she can barely see. The longer it takes for Aeryn to find the answers, the more people will die. Her choices might cost her everything. Does she have the strength to do what needs to be done? Can Aeryn protect a kingdom she may not even want to save?

Be the first to review “Daughter of Fire: The Darkness Rising (audiobook) by Karen Frost” Cancel reply 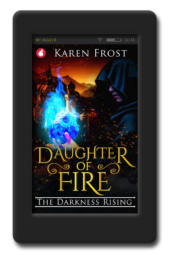 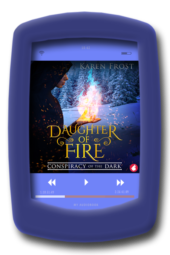 Buy product
Add to wishlist
Daughter of Fire: Conspiracy of the Dark (audiobook) by Karen Frost