With The Island Between Us, author Wendy Hudson combines adventure and romance. This is her first book to be translated into German by Ylva Publishing, as Um uns nichts als das Meer. To celebrate this milestone, she talks to us about the inspiration for this lesbian romance novel and how useful a condom can be in a survival situation. 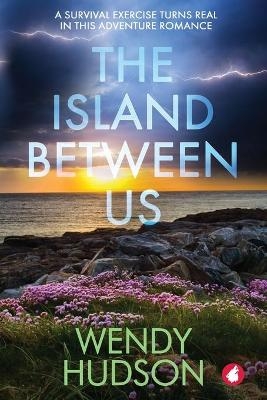 In your own words, how would you summarize your lesbian romance novel The Island Between Us?

It’s a survival story with a romance at its heart that will take readers on an adventure.

There are ten main characters on a survival course who end up stranded together and all play their part in what becomes a sometimes challenging but heart-warming group dynamic as they battle for their lives. There’s hiking, foraging, shelter building, and survival skills to learn.

Also, Scotland! It’s set on a remote Scottish island, so you get all that lovely scenery as well.

This lesfic novel has a unique premise. How did you come up with the idea for the survival course?

I went on a survival course! I’ve always had an interest in learning survival skills. I watch tons of shows with this theme and thought I should try it myself. I had such a fun weekend, but there were some mishaps along the way. I may or may not have stabbed myself in the hand…

I did it as part of a small group, and the different dynamics that developed were all really interesting considering it wasn’t a real survival situation. That got me thinking what it might be like if it did become real, and the story developed from there.

What two survival essentials and one non-essential item would you take with you to a deserted island?

I’ve thought about this question way too much!

My essential items would be a very sharp knife and a flint for starting fires. With a knife you can whittle and make so many of the other basic tools you might need, and it’s very useful for building shelter and preparing food. It’s so exhausting trying to make a fire without a flint that it’s definitely a worthwhile essential item! And you need fire to survive!

My non-essential item has to be a book, doesn’t it? Don’t ask me which one, though… That’s an impossible question.

Which scene in the novel was the most fun to write?

Any scene with Havana in it! When I set out to write her character, she was going to be like an annoying little sister—which she was, to a point—but she also ended up being very much the heart of the group, and I know a lot of readers loved her as much as I did. I’ve been to Cuba with my day job a couple of times, which is where her name came from.

What do you think readers can learn from your two very different main characters?

No matter who you are, where you come from, or where life has taken you, everyone needs the same basic things to survive, and when you strip all the nonsense away, people you don’t think would have anything in common can actually have everything in common.

Kelsey is an actress seeking time away from the spotlight. Which actress do you think would do equally well being stranded on a deserted island?

Kate Winslet, no question. She survived Titanic, so… I don’t think I need to say any more than that.

What is the most fun or surprising survival trick you learned in your research?

How much water you can carry in a condom! Those things really are strong and expand to at least a couple of litres! The water might not taste the best, but it’s better to have odd-tasting water than to have no water at all!

Originally from Northern Ireland, Wendy Hudson is an Army kid with a book full of old addresses and an indecipherable accent to match. As a child, she was always glued to a book, even building a reading den in the attic to get peace from her numerous younger siblings.

Now settled in Scotland, Wendy loves to explore the country that inspired her writing in between travelling to as many new countries as the calendar will allow. Summers are all about camping, hiking, and music festivals. Followed by winters of avoiding the gym, skiing, football, and not dancing at gigs.

She’s always enjoyed writing, and turning thirty was the catalyst for finally getting stuck in to her debut novel Four Steps.