FROM SHAMING TO ACTIVISM: HOW I BECAME A PROUD LESBIAN

Going from a closeted teen to a role model organizing lesbian marches, French blogger ÉLISABETH CHEVILLET shares her journey that started with secret kisses and self-denial and ended with her as a proud lesbian. 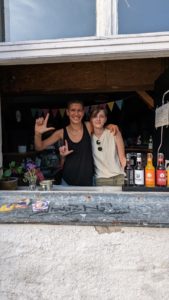 “You’re an excellent lesbian!” is a compliment I received with a great deal of pride, especially coming from one of my favourite lesbians on earth, my friend and chosen sister Franzi.

For a couple of years, I’ve been pretty active in the lesbian community. I spend time with a melting pot of queer women, from baby lesbians to intimidating old dykes. When my friend Rosie says that I make her feel safe and inspire her to embrace her own queerness, I couldn’t be happier. But no one is born a role model—I’ve come a long, long way.

Unfortunately, being a lesbian doesn’t free me from sexism or homophobia. We live in a society built by and for cisgender straight white dudes, so like anyone else, I am full of internalized lesbophobia. And it takes will, time and resilience to deconstruct it.

“Aren’t you a lesbian or some stuff like that?”

I remember splitting up with my first girlfriend when I was fourteen, after she told her sister she was in love with me. I remember denying, when the girl I was crazy for in high-school told our friends that we were sleeping together. And I remember the disgust and suspicion on a doctor’s face, when he asked me: “Aren’t you a lesbian or some stuff like that?” I remember. I felt naked and ashamed and I said no.

I used to avoid lesbian clubs like the plague, while secretly being fascinated by them. I felt no belonging to queer people and places. I remember saying that a common sexual orientation wasn’t reason enough to hang out with people. The truth is, I was scared to be rejected, both by my cis straight friends for my unspoken lesbianism and by lesbians for my lack of experience.

I remember the amount of courage it took me to call my best friend from a street phone and tell her that I “liked women”. I remember “confessing” to my mum that I was in love with Dalia. I remember my younger brother wondering whose “fault” it was. I used to doubt that it was okay for me to have kids without a male role model. I told you—I was full of internalized lesbophobia.

One is not born a proud lesbian

One is not born, but rather becomes, a proud lesbian. And it takes role models. Strong lesbian role models. It takes lesbian movies, songs, books, and podcasts. It takes dyke cafés and safe spaces. It takes queer teachers, sportswomen, and politicians. Not to mention allies in the families and circles of friends. It takes beautiful experiences—gentleness, kindness, love. And it takes time.

For me, it’s been a long way from shaming to activism. It took time until I could call myself a lesbian without discomfort. Pathologizing the word “lesbian” has been having tremendous consequences on our mental health. For many lesbians, the word still feels dirty. They use it reluctantly or prefer saying “queer”.

Call a dyke a dyke

Personally, I’m a big fan of reclamation. I am a lesbian and I love being one. I call myself a lesbian, which has become an empowering term. Nobody can harm me with this word. I own my narrative—with gratitude and pride.

When Alice Coffin’s French book Lesbian Genius came out in 2020, I was so frustrated it was unavailable in English or German, because I wanted to give it to every friend of mine. This book is a jewel—I read it twice. If I was already very comfortable with my own lesbianism at that time, Lesbian Genius pushed me to do more for the community, to help offering the safe space I didn’t have when I most needed it.

Bringing the world some “lesbian genius”

So I started to get involved for lesbian visibility. I participated in lesbian writing projects. On this occasion, I met Anastasya, a Moldovan activist from Russia with bright-red glasses.

She told us how she left Russia as a baby lesbian and sought help in the first NGO protecting LGBT people in Moldova. Two decades later, she’s become the executive director of this organization. She’s busy helping Ukrainian LGBTIQ+ refugees as we speak.

Anastasya’s story moved me a lot. After sharing it, she encouraged us to tell ours—and I decided to do so. Later, Anastasya introduced me to the EuroCentralAsian Lesbian* Community. And its mission just blew my mind: “Bringing lesbian genius to the world.” 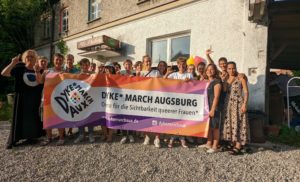 Although writing is my comfort zone, I also decided to lesbianize the world in real life. During the pandemic, I co-founded a safe space for lesbians and queer women in Augsburg. This experience is a true bliss. We celebrate women’s queerness and lesbianism at every get-together. And our community is constantly growing.

There’s also great news: we are currently organizing Augsburg’s first Dyke March in Germany. A dyke march is like a pride parade—for lesbians and queer women (allies are welcome). So if you’re in Augsburg, this is your official invitation. Join us on Saturday, June 11 at 3pm to lesbianize the city together.

Élisabeth Chevillet is a French lesbian blogger and activist.

You can read her other blog posts for Ylva Publishing here: www.ylva-publishing.com/author/elisabeth-chevil/

About the Author : Élie Chevillet