Facing public restrooms and toilets becomes a challenge when you don’t look like a feminine woman. French lesbian blogger and activist Élisabeth Chevillet flushes out some painful experiences queer people face when trying to mind their pees and queues. 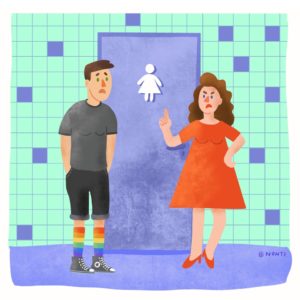 Have you ever wondered how it feels not to use the public restrooms for fear of being harassed? Ask my roommate.

My roommate is a lesbian. She is 1.93m tall and she has short hair. She doesn’t wear high heels, she doesn’t wear make-up. Her favourite colour is blue – she hates pink and girly stuff. The clothes she buys are made for men. You got it: she doesn’t fit the gender stereotypes conveyed by our narrow-minded society.

Let me tell you what happens in the public restrooms when you don’t look like you’re supposed to. If you’re lucky, you get stared at. But the chances are pretty high of getting insulted or harassed. Physical aggression isn’t uncommon either.

In a world where safe, well-designed unisex restrooms are far from being the norm, what do you do when you don’t feel strong enough to face more abusive behaviour? You stop peeing. You don’t drink, so that you get through the day and wait to be home to go to the toilet. Because it’s a safe space.

When I met my roommate, I was surprised to see how little she drinks. I thought she might have some kind of superpower: this woman didn’t need water. I was wrong. She just internalized a strategy to cope with human stupidity.

The first time it happened in my presence, we were in Sicily. We went to the women’s restrooms. My roommate entered first, I followed. A guy was waiting for someone next to the front door. When my roommate opened the door, the guy yelled after her: “Hey, hey, hey! What do you think you’re doing?”.

She just went on into a cubicle, ignoring him. The guy started to freak out, insulting her in a hysterical manner (but nobody asked if he was menstruating). I turned around, rolled my eyes and said: “Leave her alone! She’s a woman.”

The guy obviously felt uncomfortable, yet he didn’t apologize. Instead, he looked slightly embarrassed for a split second and gave me a bright smile, supposedly charming. It was years ago but don’t ask how many times this story has repeated itself ever since.

Toilets discrimination within our LGBTQ+ community

On October 1, 2021, the clubs opened again in Bavaria. After the pandemic lockdown, my roommate was eager to party. She went out three days in a row, and guess what? The toilet thing happened every single night. One of the events was even a queer party. So yes, toilets discrimination does happen within our LGBTQ+ community. The other thing is: harassers can often be women. On that Saturday, a girl grabbed the door frame to prevent the access – another one started to grope my roommate’s breast to check “if she was a woman”. No need to repeat the slurs they used.

The experience left a bad taste in my roommate’s mouth and me furious. I asked if anything would help. We started to look for solutions. We tried to imagine gender-inclusive restrooms. We wondered how to provide safety for people who don’t fit the gender stereotypes without creating danger for other women.

We talked about the systemic sexism behind women’s bathroom waiting lines: men’s and women’s toilets continue to be the same size, even though women need to use them more often and for longer. We sit to pee, which requires more space for cubicles, while urinals double the capacity in men restrooms. Plus, some women menstruate, get pregnant (and pee more), breastfeed and have kids (who use the bathroom with us) – not to mention that “women’s clothing” is way more binding.

We didn’t find a solution. We didn’t find anything that would make peeing a safe experience for my roommate RIGHT NOW. So her girlfriend will have to continue going to the bathroom with her each time, to support her if another incident of verbal or physical abuse happens. Can you imagine how it feels to be escorted to the toilets as a thirty-five-year-old woman?

We need to deconstruct gender binarity

Changing public policies takes time – especially when they are made by grey-haired cishet men who don’t care about our problems. But changing our behaviour is only a matter of seconds. We need to get ourselves together.

So next time you’re in the public bathrooms and see someone causing no trouble, but who doesn’t match how you think someone of your gender should look, you know what to do: just shut up. 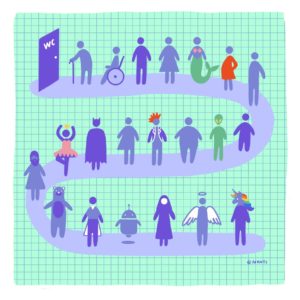 My roommate and the people facing the public restroom issue don’t ask for the moon. They’re only asking for the right to pee with dignity. Can we let them do that?

PS: Also, next time you see my 1.93m roommate out there, please don’t tell her she’s tall. She already knows.

About the Author : Élie Chevillet