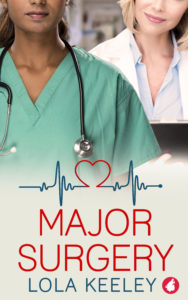 To celebrate the German publication, we asked Lola a few questions about this wonderful book.

Can you tell us in your own words what your lesbian medical romance Major Surgery is about?

Accomplished surgeon Veronica Mallick has her organized life at the hospital turned upside down by the new Head of Trauma, Cassie Taylor. Fresh from the armed forces, Cassie doesn’t work by the same rules, but the hospital is not a battlefield—until they make it one. Uniting in the face of fraudulent bosses and missing children, the women get closer. In the end, they realize how much they actually have in common.

What inspired you to write this lesbian romance? And how did you research the medical aspects of it?

It’s partly inspired by Berena, a wonderful ship that Holby City gave us (even if they ended it badly). I’m lucky in that I know a couple of doctors who work at big London hospitals, and we’ve been friends for years, so they answered a lot of my questions. The rest I got from reading surgical memoirs and autobiographies and rooting through textbooks and case studies! Nerd heaven for me.

Both of your protagonists have an iron will and love their jobs. But apart from that, they have fairly opposite personalities. What can you learn from them in your lesbian medical romance?

I think in such divisive times, it might be good to remember that most situations have more than one ‘right’ way. Generally, we’re more successful when we cooperate than when we go it entirely alone.

Veronica can teach us quite a bit about being a woman in power and how to operate within the big systems that run our lives. Cassie is a good lesson in throwing out unnecessary things and just getting to the heart of the matter.

Cassie has to cope with many losses and traumatizing memories. How important is it to you to openly address issues these issues your novels?

I think it’s important, even in romance, where a happy ending is key to acknowledge that what we go through shapes who we are. A good friend once told me that she loved more deeply for having lost so many people she cared about because it reminded her what a gift it is that we get to love in the first place. As for Cassie’s story, I wanted her to have gone through something that challenged her ability to cope effortlessly, and that was also traumatic enough to shake someone who’s worked in warzones for half her life. The tragedy she goes through makes her a different person by the time she arrives at St. Sophia’s.

Another important issue you address is prejudice towards BIPoC. What can authors do to integrate hard truths about social injustices into their books and still provide readers with a heartwarming lesbian romance?

The first thing is to always frame the racists, the bigots, the ignorant people as the problem. They’re the ones on the wrong side of history and decency. I think particularly as queer women, we have some understanding of how it feels to be targeted for part of our identity. Start from that place of empathy, but also make sure to learn as much as possible. Read what Women of Color have to say and build from that—there are so many great writers and activists on Twitter, for example—before you even get into writing. The important thing is to let your characters triumph over adversity and have them win—they get the girl, the great job, the good life. Perfectly compatible with the ‘rules’ of the romance genre.

You are a coder and writer, you have been involved in theatre, and you also have been a train driver. Would you ever consider writing a novel based on your real-life job experiences?

I keep joking with my wife that I will write a train-based romance one of these days, but the right idea hasn’t struck me yet. I’d like to visit the theatre world—ballet was similar for The Music & The Mirror—and really I’m fascinated by actors, directors, and playwrights, so it feels like it has to happen some day! As for coding? That’s been my day job up until recently, so it might take a while for me to feel like I’m ready for the fiction version. Never say never, of course!

Lola Keeley is a writer and coder. After moving to London to pursue her love of theatre, she later wound up living every five-year-old’s dream of being a train driver on the London Underground. She has since emerged, blinking into the sunlight, to find herself writing books. She now lives in Edinburgh, Scotland, with her wife and four cats.