The Fantasy vs Reality of Becoming a Full-Time Author

Two years ago this week, Lee Winter took the plunge to become a full-time author of lesbian fiction. She learnt way more than she ever bargained for.

Finding yourself at a major life crossroads can be as much fun as hugging barbed wire. For me, two years ago, I’d been made redundant from a journalism job of three decades and faced a stark choice. Get right back in the financially secure rat race, or give the big, bold dream a go and write novels for a living.
I told my publisher I’d try an experiment of being a full-time author for two years and then decide whether it was worth it. At the time, when I said “worth it”, I meant financially. I had no idea how many meanings those two little words could have…
My two years were up this week. So, what did I learn? What’s the verdict? Do I need my head read? And should you take the plunge too? I know there are many, many people out there with this same dream. 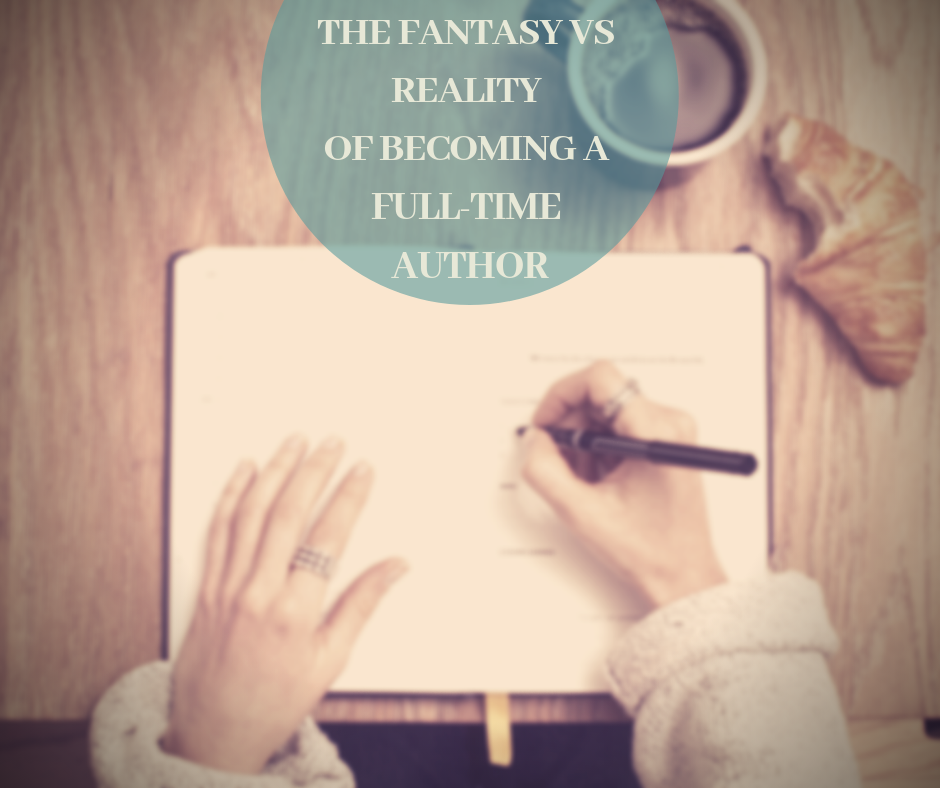 Being entirely responsible for your own workflow and motivation is like being cast adrift at sea. It’s an odd sensation. You have a lot of power, you have a lot of powerlessness, and you have a boatload of expectations. I even wrote a blog about my plans two years ago, and the wonder of all the extra time I’d just discovered. Back then, being a full-time writer felt like a surreal dream. Did it stay that way? Not exactly…

THE CONS OF BEING A FULL-TIME AUTHOR

Let’s get the negatives out of the way first… There’s a reason they call it the writing dream. It’s a fantasy more than reality. You have to be a self-starter. You haul your ass to your desk daily and commit to producing creative content for many hours on end. If you can’t do this; if your pajamas and TV soaps are calling you instead, or if the lure of your BFFs or romantic squeeze is more appealing, then you’ll crash and burn.
Interestingly, the top thing people say to me upon finding out I’m an author is: “I could never do that. I’d just stay in bed all day.” And I always reply: “You’d be amazed how motivating it is to get out of bed and write when you need money to eat and pay bills”.

Boy, it’s hard writing when you’re not in the mood. It’s the pits trying to scribble glorious prose when your creative bones are feeling brittle. It can feel draining and a lot less fun than when writing’s just a hobby. That goes with the territory, though. You do get used to a set routine and it gets to a point where writing on cue when you’re not feeling it seems a little less evil. Like, a civilized evil—Dolores Umbridge instead of Voldemort.

That poor, struggling writer shtick exists for a reason. If you’re weighing up whether to take the plunge yourself, you should be prepared to be poor from the outset. In Jae’s excellent blog on deciding to become a full-time writer, she explains “Book royalties can be pretty unpredictable, so save up at least six to twelve months of living expenses before taking the plunge.”
Unpredictable is the word. From what I’ve seen, only the freakishly talented, massively popular, or thoroughly mainstream authors will make a mint from this crazy gig. Nine times out of ten that’s not a lesfic author, either.
There are exceptions, but they’re as rare as femmes called Frankie. Add to that the growing book piracy problem, and it’s super tough getting your incomings higher than your outgoings. It’s nuts how little most authors earn despite the countless hours invested. It’s usually below the poverty line. But most of us do it for the love of writing and the hope it’ll get better, financially, as we write more.

YOU’RE NEVER OFF THE CLOCK

I found it a lot easier to compartmentalize my writing when I had a main job. When writing IS that job, it can become all-consuming. My brain seems to kick into a state of constant creative vigilance, eternally churning over any plot point I’d been mulling over when I was officially working. Throw in urgent emails from publishers, artists, editors, and readers, and bye, bye weekends, evenings, hobbies…
Maybe it’s just me!
The other downside is I’m so engrossed in all that furious, fabulous writing, I never remember to take vacations (because, hey, deadline, and oooh, cool plot twist, must.write.now) until my body’s ready to drop. So bottom line, brains can go into writing overdrive, and my planning seriously sucks!

WAIT, WHAT ARE HUMANS?

Despite being a bit of an introvert, I really enjoyed the social interactions I had at work. They were so easy and immediate. The strange little vortex of being a stay-at-home writer means you sort of shrink into a smaller and smaller pool of people you deal with, until you’re only left with those you live with. You have to be aware and make time for your friends and family, or embrace Skype at the least, or you’ll forget how to interact with your fellow man. (Guilty, as charged.)
The flip-side of this is the take-advantage creep factor, where people in your life, especially elderly relatives, work out that you’re home all the time and therefore, in their minds, are totally available for whatever task they think someone who just sits around all day is free for. Learning to say, “no, sorry, I’m still at work”, is both awesome and necessary.

One thing nobody tells you when you become a full-time author is that everyone has an opinion on it. Not kidding, this profession is verbal clickbait to strangers. You become more exotic than the Lilac-Breasted Roller bird. They want to know everything. However this leads to fun times when they inevitably ask, “So, what sort of books do you write?”
Hmm… to explain to my endocrinologist or not the psychological and sexual hijinks of lesbian ice queens? Decisions, decisions.
My most common reply is, “I write all sorts of books”, because some days, tbh, all you want are your test results. Besides, I also hate that speculative expression that comes with a more thorough and accurate answer. It’s a look that implies, “wait, lesbian books… oooh, so you’re smut writer”… hyuk, hyuk, titter, titter.
Sigh. No, Roger. In your dreams.

THE PROS OF BEING A FULL-TIME AUTHOR

Well, from those cons, you may conclude that I’m a hopeless human being, prone to forgetting my own name, friends, hobbies, and general existence, beyond books. While that’s somewhat true, I’m also a happier human.
That’s not just because of the non-existent commute times, later getting-out-of-bed times, only rarely having to fill up my car, and the optional dress code, although these do improve my mood. And my blood pressure has gone from high to almost low. Okay, that was unexpected.
What’s indescribable is how it doesn’t feel like work when you do what you love. When you’re in the zone and the words are flowing, you feel like you’ve landed your jet after breaking the sound barrier, and just spotted Kelly McGillis waiting on the runway in a leather jacket.

It’s also so freeing when you’re not trying to squeeze in a block of writing time before the next interruption for your important, main job. Because this is the main job.
On the ‘unexpected side effects’ ledger, all that scribbling for two years non-stop made me a better writer. I’m startled to see the evolution now I look back. Structurally speaking (as opposed to content),  my latest book feels like far and away the best thing I’ve written. Although it makes sense: If you do anything non-stop for two years, you will improve.
Finally, there’s the intangible. Authors exist in a dream world, a fantasy of our own spun thoughts and imaginations. It’s a surreal and exciting place to dwell. As kids we’re told to get our heads out of the clouds. Now, as adults, we get to put our heads into clouds and keep them there.
There’s no feeling more sublime.

So what’s the conclusion? The two-year test to see if I could make a go of writing was meant to be about making ends meet. And, okay, last financial year, by the thinnest of margins, I broke even. Woot! That’s largely due to my publisher also selling my books in German and audio book form (it all adds up) and readers loving The Brutal Truth in surprising numbers. Thank you, kind readers.
Emotionally, the positives of the highs I felt from writing full-time outweighed the cons of occasionally straying into becoming the clichéd socially reclusive writer.
Right, so, what’s the verdict? What will I tell my publisher?
I’ll do one more year to see if this breaking-even thing was a fluke, but if it wasn’t, I’m a lifer.
Now I’ve decided on that possibly insane course of action, I probably should get my head read. And when they ask why I’m there, I’ll just explain: I write books for a living.

Lee Winter  is an award-winning author. Her new novel, Breaking Character is now available from the Ylva store.