Of Gardens, German, and the Art of Dawdling 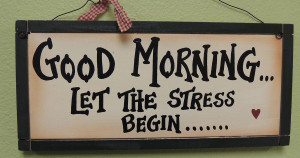 I never used to think much about dawdling. Or pottering, meandering, sauntering, strolling or lolling about. That’s what retirees did. Or my brother-in-law’s surfer mates. Or little kids. But not me. Hell, no.

I had no time for such things, working twelve-hour days with an annoying commute. Weekends were carried out with military precision: a daunting task list to be checked off as I hurled myself around suburban shops and stops in three or four chaotic hours.

The rest of the weekend involved flinging clothes into the washing machine before writing like a mad fiend on my latest book and, at chapter breaks, tossing washed things onto clothes lines so rapidly that the pegs were all akimbo, like out-of-step can-can dancers.

This became a habit of years. I felt the pressure of it almost physically, like fingers tightening at my throat if I didn’t get everything done. By Sunday night I would be worn out, physically and creatively, and resigned to starting it all over again.

Don’t get me wrong: I loved my job as a newspaper magazine’s deputy editor. I had smart, funny colleagues, status and money. What I never had was time. And that was such a strange, distant and shiny bauble to me that I never even gave it much thought. I never dared to wonder what life must be like for those who didn’t have to hit the ground running every spare minute they get.

Then my newspaper was bought out last November. After 28 years of working all over Australia for my company, I, and most of my colleagues, were laid off.

Overnight, my life flipped upside-down. Suddenly I had an embarrassment of riches of time, but gone in a blink were the status, money, and a daily dose of amusing colleagues.

I found myself staring out my window at my garden, considering for the first time what my life was all about. It’s easy never to find the time to ask yourself this when you’re too busy running through check lists. It’s useful to never to wonder whether you’re on the best track, especially if you’ve invested so much into getting to where you are right now. 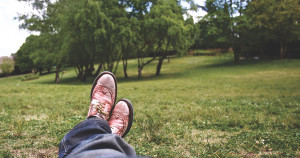 Quite randomly, in the middle of the day last week, I went shopping at a hardware store across town. Normally I’d be in and out in ten minutes, a perfect hit-and-run raid. I’d had years of practice, after all. My confused girlfriend texted me after an hour, wondering where on earth I was.

“I’m dawdling,” I texted back. And I realized it was true. Me, who never dawdles. “It’s fun,” I added, realizing all of a sudden that it was.

I didn’t even buy anything.

I have now taken up German. I’m pretty bad at it so far. I test out occasional phrases in emails to the German editors at Ylva, and realize, to my humiliation, that usually not even one phrase is spelt right. They never correct me or laugh (much), which is nice. I’m getting better at it, though. I have the time to get better. And that is a really curious sensation.

Which brings me to my New Year’s resolutions. I earnestly vow to spend 2017 dawdling. Exploring. Taking time to stop and poke at things. Stumbling over bad German with unrepentant regularity. Staring at my garden and actually seeing it for the first time in years. There’s a citrus tree up at the very back corner. I didn’t even know it was there. Now I do.

I will be writing, of course, penning more lesfic books, as many as I can squeeze into my year.  I am inspired by the stories burning along my fingertips, all itching to be written. But the urgency of life fully immersed in the rat-race has evaporated. It’s fading from my muscles, my eyes, my skin, my brain.

I’m not sure which version of me is ‘better’ – the driven, full-time journalist with high blood pressure and an efficiency seemingly only matched by Russian chess computers, or the full-time writer/part-time editor who stares out of windows at gardens and thinks it’s cute that the German word for skirt is “rock”.

What I do know is this: Dawdling is an underrated pastime. And so my resolution for 2017 is to do a lot more of it. Especially now that I have time.

Ex-veteran journalist Lee Winter is now Ylva’s Digital Content Editor. She is also the author of the award-winning mystery/thrillers The Red Files and Requiem for Immortals. Lee lives in Australia with her long-time girlfriend where she spends much time ruminating on her garden and accidentally butchering the German language.