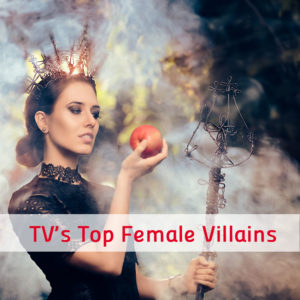 Ever want a chill to run up your bones? Study a good villain. Not someone who mustache twirls or cackles, or monologues about why they have to kill the country/planet/universe (spoiler: because they’re evil, bwahaha). Nor someone weak as Jonathan Pryce in Tomorrow Never Dies who looks like his evil talent is inflicting paper cuts on James Bond.

I’m talking a terrifying, powerful, awful villain, someone with a believable cause or a moral code that they hold dear to their heart that makes perfect sense to them. It’s even scarier if they take immense pride in their dark deeds and seem pleased after a good day’s bad work.

All great fictional villains have three things in common: they’re intriguing, memorable, and mess with our heads.

How do these villains mess with us?

Simple. It’s not just what they do, but how.

What if a villain isn’t some obviously mentally unhinged and destructive individual we can spot a mile away? What if they’re smart? Funny? Attractive? Sociable? Well-dressed or urbane? How do you explain away someone like that? Someone who seems so adjusted and charismatic who could easily walk among us? That’s so much creepier.

What if they’re women as well? Some of the most chilling fictional villains are female, and they add another level of intrigue. Women who defy, not only societal or gender norms about violence or being good and playing by the rules, as well? That’s head turning.

A woman who doesn’t care one bit how she’s supposed to behave and flings the rules back in the face of society? Women who don’t care when people spit at them: Just who do you think you are? It’s a naughty indulgence to secretly admire them… or in some cases watch them through our fingers, given how truly horrific they can be.

So who are the best of the baddest female villains on our TV screens? It’s open to debate, of course. Below are my picks. All these women have their own codes, own beliefs that they’re doing the right thing, and all, to the last steely eye, rigid hair bun, or snarky smirk, are so charismatic it’s impossible to tear your eyes from them.

For dominance at any price, there’s Game of Thrones’s Cersei (Lena Headey). If this cold, ruthless, brother-shagging monarch has to green-nuke an entire kingdom to destroy the people who humiliated her and threatened her reign, so be it. No compunction, no compassion, no regrets. Just, buh-bye Felicia.
Danger scale: Genocidal menace. Do not approach.

2. and 3. Aunt Lydia and Serena Joy/Mrs Waterford, The Handmaid’s Tale

Margaret Atwood’s chilling tale of a dystopian nightmare remade into a TV show includes two terrible, complicated female villains. Beautiful, icy Mrs. Waterford (Yvonne Strahovski) was co-architect of the plan to force fertile women into procreative slavery as handmaids—trained by efficiently brutal Aunt Lydia (Ann Dowd). Mrs. Waterford’s complicity in creating the misogynistic hellscape of the Republic of Gilead runs deep. She spins her awful deeds in her head so she’s in the right. Adding confusion, she whips back and forth between being terrifying and despicable, and someone capable of our compassion as her hardline views shift. Complex and disturbing.

Danger scale: Devious, smart, vicious, ruthless “mean girl” who can also sometimes be reasoned with. At her worst, she’ll sic her powerful, raping, asshole of a husband on you, which is even worse than it sounds.

Aunt Lydia is one of the worst zealots, believing the future of mankind rests with her, and she shows no signs of doubt. In her head, she’s twisted her brutalization and training of fertile women into an essential duty. While as terrifying as a nightmare, this menacing, manipulative lump of a woman also sometimes has humanity burning in her eyes, which makes her all the more disturbing.

Danger scale: Causes nausea and vomiting among women, and an involuntary aversion to red capes.

This Russian assassin (Jodie Comer) is beautiful, cold, and calculating (and queer), and has a taste for bedding the ladies. Her code is her job, even if that means trying to kill her own mentor. What’s disturbing is how little empathy she has, followed by the unnerving way she can also seem capable of love, or at least obsession. But just when you think you have her pegged one way or another, she’ll turn that assumption on its ear. She’s unhinged enough to look orgasmic watching the moment of someone’s death, and vulnerable enough around a woman she loves to pull on our (reluctant) sense of empathy. Brutal and baffling.

Danger scale: Not to be toyed with lightly. Or at all. Do not accept gifts. Especially perfume.

In the bad-ass alternate universe, Empress Georgiou (Michelle Yeoh) has compromised every value of our version of Starfleet – she’s cruel and xenophobic and believes in the course to wipe out other races. She sees her code as noble; that peace and love are weak nonsense that will see her empire overrun. Her story has a lot of modern parallels about whipping up fear about The Other. This is what makes her most chilling, as she is subtle, sly, and clever in her rhetoric. She’s capable of making a convincing case so the frightened masses believe only her destructive way will defeat our enemies. A villain who millions will gladly follow.

Danger level: Directly, her danger depends on your genetic make-up.  Be warned, she has mad martial-arts skills. For reasons. Indirectly, she can shape history. Not in a good way.

Joan “The Freak” Ferguson (Pamela Rabe) might be dead…and no one knows quite yet… but this is the Wentworth prison governor who ruled with a leather-gloved fist. Joan’s code was about precision, efficiency, and a well-oiled prison. Her methods included murder, collusion, and planting evidence. She was complicated: queer, conflicted, tormented by ghosts, with bouts of psychopathy, who became a disarrayed mess by the end. Her mental deterioration turned into car-crash TV, as weirdly compelling as her fixation on yellow pencils.

Danger scale: Thinks like a chess master. Never turn your back on her. Assume she’s listening to every conversation. Never agree to office drinks.

There are countless shows with female villains we have loved so hard it hurts but they’re off the air. But for me, two stand out for sheer, bloody ruthlessness, on a scale I can’t recall anywhere else. While Callisto on Xena came close, so close, to inclusion, I’m talking these two…

Orange is the New Black’s sociopathic top dog inmate Vee Parker (Lorraine Toussaint), who could manipulate sun into rain, her “adopted” son into her bed, and Crazy Eyes into a devoted allegiance, all in her bid to rule her world.

And Battlestar Galactica’s hard-assed, brutal Admiral Helena Cain. Horrified to discover that her lover (Tricia Helfer’s Number Six) was an enemy, in a horrific plot line, Cain ordered the woman sexually abused and humiliated. And yet, through it all, like all terrifying villains, down to her core, she believed everything she had done was right.

Did we miss anyone truly dastardly? Which female villains with a code do you love to hate the most on TV right now? Or who terrified you most in the past? Let us know in the comments below.