Finding the Fantasy in Lesbian Fiction 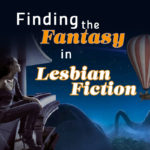 A few weeks ago, Ellen Simpson wrote a brilliant piece about our preconceptions of lesbian fiction—what it is we expect, and what it is we want from that that definition. As someone who enjoys all things fantasy and sci-fi, I’m always discouraged by the lack of well-written, non-young adult fantasy novels featuring queer characters and romantic storylines.

This might come down to the fact that lesbian fiction, is, for the most part, dominated by romances. Which, okay, is fine if you want doctor/art teacher slow burn, or a bar-tender/firefighter erotica. But where’s our mage and princess high adventure, or sci-fi cyberpunk about a lesbian detective and her AI partner? So, going back to Ellen Simpson’s great blog, I ask myself, can lesbian fiction be defined by dynamic, complex, funny, dark queer characters, rather that just romance between two ladies?

As readers, are we conditioned to expect certain things from lesbian fiction and dismiss anything that doesn’t fit our preconceived ideas? Does the good gal have to get the girl? Do the pop star and the hard-as-nails manager have to bang each others’ brains out by page 267? Or is there room for a different kind of story?
Where Are Our Queer Fantasy Readers?

Someone once told me that most readers of lesbian fiction aren’t in it for the fantasy and most fantasy readers aren’t in it for the sweet lady kisses (which, I guess gets in the way of their hardcore manly stories about dungeons, dragons, and white male saviors.) Of course, this is a generalization, and there are many readers who would defy this statement. There are a ton of great feminist fantasy novels, with great female characters and awesome world building. But they so rarely feature queer characters, let alone a queer romantic story line.

Finding the Middle Ground Between Fantasy and Lesbian Fiction

There has to be a middle ground, doesn’t there? The kind of story that would satisfy both lesbian fiction readers and lovers of speculative fiction. Of course there is. I’m writing it. But since that’s a long way from being published, I thought I’d share a few of my favorite fantasy novels, that have both marvelous world-building and diverse, wonderfully written queer characters.

This might be one of my favorite novels of all-time, so I’m going to put it first. Seth Dickinson (who wrote this masterpiece at just twenty-five), is a male author who writes his female lead with delicacy, nuance, and brutal honesty. Baru Cormorant is unapologetic and flawed and smart and harsh and I would die a thousand deaths for her. Be warned: this book is not light, nor does it contain a particularly happy ending. It’s also book one of a four-part series. But if you like strong, queer female characters, political intrigue, and a healthy dose of betrayal and deception, this one’s for you.

This is the kind of story that I sometimes feel was written specifically for me. It has so many of my favorite things: again with the political intrigue, but this time with courtesans, sexy assassins, and a decadent world that feels rich and beautiful, and at the same time, deadly. The main character has relationships of varying sorts with both and women, and is undeniably queer. Did I mention this book is sexy as hell? If you like this one, try Santa Olivia by the same author. It’s more of an urban fantasy, but arguably the best thing Jacqueline Carey’s ever written.

The Long Way to a Small Angry Planet – Becky Chambers

This book is delightful and weird and sad and wonderful. My fiancée described it perfectly when she said it was “like Firefly but better”. I’m a sucker for found family, and this novel shines with it.  Go stumbling about the universe with the crew of the Wayfarer. I don’t want to give too much away, but along with a great sci-fi storyline, there are two romantic narratives, one straight, one queer, both strange and wonderful. This is a fairly easy read that sucks you in, and makes for wonderful plane/train/waiting-for-a-bus reading.

The Lily and the Crown – Roslyn Sinclair

The Lily and the Crown is the perfect example of a well-written sci-fi romance, in which neither the sci-i nor the romance suffers. Roslyn Sinclair’s world-building is exquisite. She creates a universe of space pirates, cute botanists, and spaceship adventures. The romantic story is hot, sensual, and blends in seamlessly with the sci-fi aspect. It’s a great read and proof that readers can have the best of both worlds.

There are more novels out there that strike the prefect balance of queer characters and compelling fantasy narratives, but I wish there were more. Feel free to share your favorites! Maybe by questioning our preconceived ideas and asking ourselves what we want from lesbian fiction rather than what we expect, we can start redefining what lesbian fiction means.

June 2018 is Speculative Month for lovers of sci-fi, fantasy, and otherworldly lesbian fiction at Ylva. That means bargains for readers who appreciate rippling-muscled, Lycra-suited heroes, tales from the other side – supernatural, horror, dystopian, utopian, or futuristic fiction – along with rollicking space adventures with ladies who love the ladies. Grab a bargain here: www.ylva-publishing.com/current-deals