‘Hallo’ to Hazel Yeats, Sweet Love, and One Funny Bunny 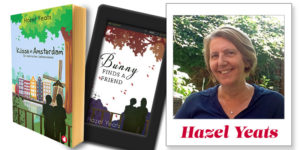 February is Ylva’s month of romance and few books are sweeter than Hazel Yeats’s delightful first novel, Bunny Finds a Friend. It’s about a driven American children’s author finding romance with a laid-back Dutch woman in Amsterdam, and was first published by Ylva in 2016. In honor of it recently being translated into German, check out the new interview Hazel did about her book of rich characters. Then maybe also check out Bunny.

What is Bunny Finds a Friend all about?

It’s about growing up (a process not quite completed for many people in their thirties) and finding your place in the world. It’s about family, freedom and commitment. About settling down without settling.

What has a rabbit got to do with a lesbian romance?

One of protagonists, Jude, is a writer. She’s writing a series of children’s books about a white rabbit named Bunny.  One of her titles is actually Bunny Finds a Friend. Naturally, it also refers to Jude and Cara (a Dutch woman she meets) finding each other.

The main characters seem so different at first – Cara, who doesn’t want to be tied to anything, and Jude, an American author who is focused and quite successful. What do you like about them?

That’s exactly what I like about them, that they’re different enough to seem incompatible, but that they’re actually a perfect match. What Jude teaches the ever-insecure Cara is that she doesn’t have to change or live up to some standard. If Cara wants to sell pizzas for a living then that’s perfectly okay with Jude. She lets her be, and that’s actually the very thing that makes Cara stop running from herself and start to grow.

Bunny Finds A Friend is a romance with a fine dose of humor and with an interesting plot. It is about family, finding destiny, self-love, and self-confidence. What makes it special?

When I write a romance novel, I hope readers will enjoy the romance. I want them to root for the girls and be left satisfied when they ride off into the sunset together. But personally, I’m also a sucker for comedy. So I tried to bring some humor to my romance and I hope I’ve succeeded in doing so.

Caraʼs meddling family plays a big role. Her hilarious sisters and sister-in-law are drawn wonderfully. Could you describe the role of Caraʼs perfectly imperfect family?

These women have yet to learn how to leave well enough alone, and they probably never will. Their baby sister is like their project. On the one hand, they drive Cara mad with all their well-meant advice and their deprecating comments when she doesn’t take it. On the other hand, Cara leans on them for love and support and probably wouldn’t survive a day without them.

This is your debut novel. How did you come up with the idea for it?

I started Bunny when I read about a submission call for Christmas stories on the Ylva website (hence the Christmas-y opening scene). I couldn’t finish in time, but when I finally did and sent it in, I was asked to extend it to a novel. Needless to say I jumped at the chance. I will always be grateful to Ylva for this opportunity. The Ylva staff is wonderful to work with.

Why did you pick Amsterdam as a setting for your romance?

The idea to choose Amsterdam as the (rare) setting was actually suggested to me by my editor. It turned out to be a great idea. Living in the Netherlands myself, I had a lot of fun situating it there.  Amsterdam is a bustling, overwhelming and magical city, but for a small town girl like myself it can be a little too much of a good thing, so spending a day or a weekend there is about as much as I can take.

How long did it take to write and how was the writing process?

It took me the bigger part of a year, I think. I had some time off work so that sped up the process. I found out, writing this novel, that I’m actually quite cut out to be a writer. Turns out I really can be focused, passionate, disciplined, and dedicated, as long as I do something I love. And I had a lot of help from Ylva’s great team of editors and proof readers.

What can your readers expect next from you?

I am actually just about to complete my new novel. It’s not strictly speaking a romance novel, but it’s definitely a love story. It spans decades—something for readers to really sink their teeth into. It’s about all the good stuff: family, destiny, guilt, secrets, lies. But mostly, it’s about the love between two very special women.

Ylva author Hazel Yeats lives in the Netherlands. She knew from an early age that she wanted to write, but it wasn’t until decades later that she finally wrote a novel. Now she’s hooked. When she’s not slaving away at her day job, she’s cycling, sipping cappuccinos, or growing her own veggies. And she sings, in a very unambitious choir. You wouldn’t peg her for a soprano, but she is. She published Bunny Finds a Friend with Ylva.