Inside India: Writing Lesbian Fiction from the East 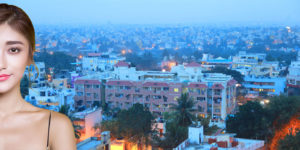 After reading lesbian romances set in exotic Western locales, I always wondered what it would be like to read a story based in my own world. Since, as far as I could ascertain, such a story didn’t exist, at least not outside of high-brow literary fiction, I thought I’d write one.

Exhilarating though the idea was, presenting India to foreign readers was—and remains—a frightening prospect. Authors always run the risk of giving the idea that the story is a generic representation of India or the “Indian lesbian experience”.

The odd expectation of representing India

Just last week, a friend from Europe asked me if Arundhati Roy’s Booker-winning The God of Small Things was an accurate representation of India. I pondered it for a while, flummoxed as to how to answer such a complex question. Finally I told him that it represents a very small part of India. That it’s a very big and very diverse country, one that no book or film could ever accurately represent. Looking back, it seems like a vague and evasive answer, but I’m no closer to figuring out a more comprehensive response.

Anyway, to get back to the point, to say that there is a single Indian lesbian experience would be terribly short-sighted. So, then, how do I want anything I write in this genre to be seen if not as a story about India or an Indian lesbian story?

Well, of course, it would be one representation of India and the Indian lesbian experience. But that is not to say there aren’t thousands of others. Perhaps it’s reasonable to say that my writing is likely to be a fair reflection of the lives and aspirations of young women in the space I occupy in society. That is, urban, educated, independent, reasonably well-off, upper caste, middle class. My life choices are not dictated by family, religious, or financial pressures. At least, not to the extent that I don’t get a say in how I live my life.

The stories would be very different if their protagonists were women who are not as privileged.

Unfortunately, the foreign mainstream media are usually interested in telling stories of those Indian women who are destitute, dealing with violence and oppression on a daily basis, or being forced into arranged marriages. In other words, women whose lives are not their own but the property of men.

Books and films, viewed from a Western lens, present a picture of India that is either a victim of extreme poverty or a land of snake charmers, Bollywood, and spiritualism.

The international news media cash in on this representation by reporting events from India that they believe are likely to gain the most eyeballs. Such as the gang-rape of a young woman in 2012, which gave Delhi the sensational label of “the rape capital of India”. The mundane, everyday lives of Indians, which might, in many respects, be similar to their counterparts in the West, never become topics of conversation. Well, let’s face it, where is the shock value in that?

This is not to say that there is no need to highlight these disturbing issues to the outside world, because there is. Sometimes it is only the fear of bad publicity and international pressure that drives apathetic governments into action. The problem arises when the Western media, fancying itself the “saviour of the uncivilized East”, limits the news from India to only those images that reinforce the dominant stereotype.

Resisting the urge to pander to Western audiences

The flip side of this sensational representation is the need to make India palatable to a non-Indian audience. This is a trap that a lot of literature intended for a western audience tends to fall into when the work is from India or Indian-origin people.

There is a belief that we have to make ourselves and our culture easy to digest for other parts of the world.

One of the tools for doing that is to over-explain or simplify things. It’s hard to see any good coming out of dumbing things down. All one ends up doing, besides belittling one’s own culture, is underestimating the intelligence of the readership.

When I was growing up, our bookshelves at home were full of British titles. There were several things in them that we didn’t understand. The way people lived, the stuff they used, food they ate. (What the hell were scones and crumpets anyway?) But none of these things stopped us from enjoying those books about people, places, and lives that were completely different from ours.

Therefore, my question, while writing from the East, is this: If those books worked for us as kids, why can’t it also work the other way round? I’d like to believe that it will.

Sheryn Munir was born in Lucknow and grew up in Delhi, India. She studied journalism and freelances as a writer, editor, and web developer. She has a weakness for chocolates, Indian street foods, and British television dramas. Sheryn started writing from age seven, but was only recently inspired to write a book close to her heart that is about her own people. That book is Falling into Place.