Playing Like A Girl—Breaking Down Barriers in Women’s Football 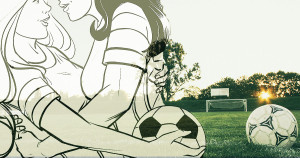 Sure, it’s not everyone’s cup of tea and whether you watch it or play, sport can be a tribal-infused mixture of aggression and grace. Whether it’s the European Football Championships, or the local team kicking a ball around, it can bring people together or set others apart in one big ball of adrenaline-induced, anxiety-riddled ecstasy.

Nudging women into the spotlight

Sport gave me confidence, direction, and purpose as a participant, along with a life-long interest as a fan. However, one issue keeps cropping up time and again—sexism.

From the moment I chose to kick a ball I encountered it. “You can’t play football.” “Why are you picking her—she’s a girl?” Or the worst of all, “you’re not playing, you’re a girl.”

One of the problems is that outside of tennis, athletics and golf, women’s sport usually suffers from a lack of media exposure and money. But now there are more TV shows dedicated to women’s sport, as well as programs dedicated to highlighting and profiling players, often from minority sports.

It’s heartening that things might be gradually changing. And this summer sees the women’s European Football Championships kick off in July in the Netherlands and, for the first time, I’m a little more positive.

Could this be the year more female sports enter mainstream TV?

Kicking football stereotypes to the curb

There are many positives around women’s sport, but you’ll also always see the usual social media comments which boil down to: Women are not as good as the men. Therein lies the problem.

Women compete against other women in top-level sport, not men. It’s not a battle of the sexes. Both events should be enjoyed for their own merits. Some sports have already succeeded at this, so why are others, such as football, lagging behind?

We can enjoy the achievements of Roger Federer and Serena Williams without constantly having to hear that she couldn’t make the men’s top 100. Yes, it’s true, she couldn’t, but tennis can look past this when celebrating her career.

So why are women in the biggest sport in the globe constantly being put down?  What is it about football that makes sexism so rife?

Sport’s ugly side is a mirror of society

Everything nasty in society can be seen mirrored at big football matches—you can find sexism, racism, homophobia, and violence. I read one comment that the Euros would be the biggest gathering of lesbians in one place in Europe. Even if it’s true, why say it like it’s a bad thing? It’s another slur in a long line of them.

Such stereotyping is just part of the wider problem. Instead of the focus being solely on skill and achievement, female players are also judged on looks. There’s an expectation they should look pretty and feminine. Players are often objectified or ridiculed depending on how sexually available they are seen to be to men.

There is no denying that the prettier they are, the more money they can earn in endorsements. You don’t have to be the best to make the most money. Even so, the pay gap between male and female footballers is huge. Basically, fewer fans mean less money and the cycle continues. The bottom line is that female players can’t compete on pay with male players, with or without photogenic looks.

Regardless, these women are gifted athletes who don’t want to be judged on their looks at all—they want to be taken seriously for their abilities. Only when the women’s game receives respect in its own right, will these issues be resolved.

So what’s the solution to the ugly side of football? Education helps. So does good marketing and media exposure, as a way to erode away these barriers to allowing women to just focus on playing the game they love.

The days of red-blooded male ownership of this global sport are slipping away. You see it every day now— female line judges in the male game, female presenters and commentators, and the odd female manager too. These trailblazers, like the players, swat away the abuse every time they stand their ground.

The next time someone says, “You’re playing like a girl” to a male, maybe he can imagine one of the many great female athletes and think, “hmm, not too shabby then”.

I know I’m dreaming. Things are better but there is a long, long way to go. I’ll be keeping a close eye on the Euros, looking for more rays of hope.

Wendy Temple grew up in East Edinburgh and has an academic background in Community Education as well as Healthcare and Physical Education. A sports fanatic, Wendy played hockey and volleyball competitively and football for leisure. She loves watching sport, reading, writing, genealogy and history. This year Wendy published her debut novel, Defensive Mindset, with Ylva, a story about rival soccer stars from opposite walks of life who become teammates and find love.

Join Wendy at the Dalriada on Portobello promenade for the launch of my first book. Feel free to bring friends along.
Friday, May 26 at 7 PM. https://www.facebook.com/events/189508254861342