Laughing at the Unexpected—What Makes Humor So Funny? 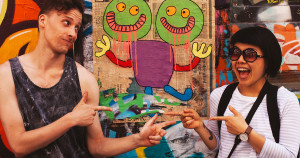 What is comedy? Webster’s Dictionary defines it as a kind of shingle you hang outside your house to stop a witch from cursing your crops. My dictionary is very old.

A more current dictionary—or, you know, Google—might define comedy as the unexpected. That’s why, if you’ve been on the internet since the year 2000, you’ve probably encountered jokes that are just completely random things happening, or utter surrealism. And they can be pretty funny.

If you’ve watched any current cartoon sitcom that isn’t Bob’s Burgers, you’ve also probably figured out that someone just shouting VACUUM CLEANER for no reason isn’t really all that funny once you come to think of it. Ironically, that random humor comes to be expected, and you’re left with just the answers to a crossword puzzle you can’t find.

That’s why we might also define comedy as the unexpected contrasted to the expected. Which, in most cases, is societal convention or even just a pattern built by the repetition of a joke (you’ve probably heard of that rule. Hint: three).

This is why the British Death At A Funeral is funnier than the American remake of Death At A Funeral. Both films pretty much follow the same plotline of shenanigans ensuing, as they’re wont to do, at a funeral, where one would expect everyone to be acting somberly.

In the Brit version, the characters are a bunch of English character actors right out of Downton Abbey, so there’s an added expectation of decorum. In the American version, they’re broad comedians like Chris Rock, Martin Lawrence, and Tracy Morgan. Funny people, yes, but it isn’t exactly a shock when they start goofing around.

This is also why sitcoms tend to get their biggest laughs not from the comedians in the cast, but from dignified acting legends with deep, grandiose voices, like Alec Baldwin or Andre Braugher, who just act out something ridiculous with the same gravitas of an Oscar clip monologue.

Of course, if that was all there was to it, every sitcom would just be Patrick Stewart showing up, saying the word “POOP!” at inopportune moments, and getting huge laughs. While this works out well for a show such as The Goldbergs—yes, that’s what that show is about—there’s an added ingredient integral to all storytelling.

You can call it flow, pace, rhythm, but you’ll see it in just about any artistic endeavor—a  fight scene, a song, a dance number. All have the tendency to start small, then gradually build on that smallness, increasing the complexity at a rate that doesn’t lose the audience, but doesn’t take too long to get to the point either. This is most commonly known as the running gag, but that’s only one small part of escalation.

Jackie Chan is fighting one New York gang member who happens to be well-versed in martial arts. Then two more show up. A song starts out with just a piano section, then begins to incorporate drums, a bassline, so on. A joke can do the same thing, starting out with just a slight exaggeration of something in the real world—wondering why a spork is called a spork instead of foon—and then making that exaggeration more extreme. Someone becomes obsessed with finding out why a spork isn’t called a foon, pinning newspaper clippings on a wall, connecting them with differently colored strings, paying a detective to dig up dirt on it.

Other, smaller jokes are brought into to momentarily distract from the larger joke, making its continuation once again unexpected. The old rope-a-dope. While the audience is laughing about this other joke about geese, they’ve forgotten that the foon joke is still in play. More and more jokes are brought in, overlapping and undercutting and running parallel to the original joke. Before the audience can get tired of one line of jokes, another has taken the relay.

By the time the first joke has built to its conclusion, the audience might’ve totally forgotten it, which only makes its return all the more unexpected. Even drama can be in service to comedy. You can make a joke really unexpected by underlining it with pathos, by making the audience care so much about the characters that they’re not expecting a joke to hit them. and if you do all that, your crops will be safe from witches.

Georgette Kaplan was born a poor child in Mississippi, and remembers sitting on the porch with her family singing and dancing around her. After learning she was adopted, at age 21 she hitchhiked to St. Louis, where she worked at a gas station and in a traveling carnival. Later, she quit and pursued her dream of a writing career. She now lives in Mississippi with her life partner Marie. Her newest book with Ylva is Scissor Link.