Spreading the Love: Spicing up Lesfic Genres with Romance 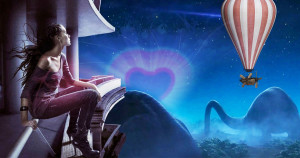 We’re all suckers for cute queer lady couples in our books, and we love cheering on a good relationship despite its obstacles. The thrill of will-they-won’t-they, the drama of break-ups and get-togethers, the complicated love triangles; these are all things we secretly can’t get enough of.

The thing is that not everyone wants to read pure romance. The more acceptable queer media becomes, the stronger the push for a variety of queer genre pieces. We want gay space aliens, gay cowgirls in the Old West, gay teenagers in dystopian young adult fiction. We want gay characters who aren’t defined by their love lives but by the situations they face, their personalities, and the contributions they make to the story arc as a whole. We want queer romance, but we want it in the context of something bigger. And this is exactly why the romance genre, especially the lesbian romance genre, has become so versatile.

Romance is the duct tape of writing. It can be used in any situation. A romance novel can be historical romance, rom com, science fiction and romance combined. Love is not bound by genre, time period, or alien species. You can’t always fit sci-fi technology into your Western, and you can’t always fit comedy into your gritty action piece, but you can always fit romance into anything, and it doesn’t have to overpower the story.

Often in the mainstream, the plots surrounding queer women focus entirely on their sexuality and their relationships. Go to any public library and most of the novels in the LGBTQ section will be about coming out and the struggles that go along with it. While these stories are important, many of us are tired of seeing the same plot lines crop up again and again, and we crave more than the reduction of queer characters to their love lives. For this reason, it’s easy for some people to shy away from writing romance or reading a lesfic novel categorized in the romance genre. However, in good writing, romance doesn’t make a character one lovesick half of a whole, but a whole person who has found a kindred spirit to bring along on their adventures.

Giving a character a romance arc doesn’t have to ignore the other struggles they face or the deep facets of their character. It makes them human. Love is one of the universal emotions that inspires empathy and makes individuals relate to one another. Give a villain a romance and suddenly we humanize them more. Give a protagonist a tragic romantic backstory and suddenly we understand why they act the way they do towards others. Love is a driving factor both in our own lives and in our characters’ lives. It can be someone’s entire reason for a quest, or it can be a nice added bonus they experience along the journey.

The application of romance and its varying degrees of prominence in writing are almost as versatile as the stories themselves. Love stories can be slow burns or creep up out of nowhere. They can be positive relationships or harmful for all parties involved. They can last forever or fade out immediately. No two people experience love in the same way, and that’s what makes romance so fascinating to read about, especially in lesfic. When straight writers and popular culture depicts the only queer love story as a tragic lesbian couple, our own community responds with volumes of novels showing the nuances of lesbian relationships, both the ups and the downs. And, as lesfic continues to venture into new genres, romance will often follow it, supporting the characters in all its various forms.

Shaya Crabtree was born and raised in the Midwestern United States. At age twelve, she began writing and never looked back long enough to put down the pencil. She studied English and Creative Writing at university. Shaya has an affinity for cryptozoology, conspiracy theories, and cooking competitions. She just published her debut novel You’re Fired with Ylva.