Astrid Ohletz’s TOP FIVE—The Books That Touched Me Most

How cruel is it to ask me to hand in a top-five of books? Hello? At best I could come up with a list of top fifty. But, since this isn’t allowed, I decided to make a list of the books that touched me the most, intellectually and emotionally—and even this list is far from complete. I’ll never forget reading for the first time Till We Have Faces: A Myth Retold by C.S. Lewis, a book that is a retelling of Cupid and Psyche. And a special place in my heart is reserved for Jim C. Hines and The Stepsister Scheme (Princess Novels), because how often do you find a mainstream series written by a man where the super-cool lesbian princess gets her happy ending? However, as my list doesn’t hold a lot of lesfic books, I may have put my thumb on the scales a little, so as to include three books by female authors and two by males. So, here it is, my ultimate list: 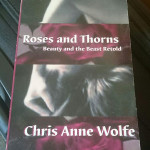 I do love retellings of classic tales, plus I am a sucker for a good fairy tale. You can’t imagine my joy when I stumbled across this book several years ago. Roses and Thorns is one of the most amazing retellings of Beauty and the Beast—with a twist. This time the Beast is an intriguing woman and, yes, there is a romance developing—just like in the original. The language is wonderful as the author weaves her word magic.

This is an older book and one that the lesfic community shouldn’t forget. Unfortunately, author Chris Anne Wolfe died several years ago. But I believe we need to claim our history by taking hold of the old faery tales and by retelling them our way. Those stories then become so powerful, so wonderful, and so modern.
https://www.amazon.com/Roses-Thorns-Beauty-Retold-Amazons/dp/1495253376/ 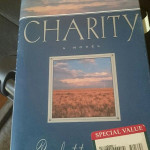 About ten years ago I picked up a second-hand hardcover copy of this book and was blown away. Years later I got in contact with the author. I learned that she had a sequel but no one wanted to publish it and that her first book, Charity, was out of print as well. I’ll never ever forget how I felt when she agreed to re-publish Charity with Ylva and to give us the rights to her sequel, Fervent Charity, too. It was one of my happiest days ever. Paulette is now over 70 and one of the wisest and funniest women I know.

But back to the book: Charity is an enthralling murder mystery/historical fiction, set at the frontier plains of Charity, South Dakota. Gustie Roemer, the local school teacher, and Lena Kaiser, a sodbuster’s daughter, strike up an unlikely friendship. Gustie also finds love and family with two Dakota women: an old medicine woman and her adopted granddaughter.

This book isn’t an easy read, but it touches your soul and never lets go. There is a mystery, there are poisonous family bonds, there are friendships, there is love, and there is the South Dakota landscape. It will stay with you long after you finished it. 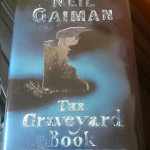 Have I already mentioned that I love retellings? I did? Okay, have I already mentioned that I’m a Neil Gaiman fan? The Graveyard Book is inspired by The Jungle Book by Rudyard Kipling. Only Gaiman’s boy isn’t found in the jungle but on a graveyard. He is the only living resident and is raised from infancy by the ghosts, werewolves, and other cemetery denizens. Now, how cool is that?

This young adult book is a wild ride and a brilliant story. Even though I enjoyed reading the book, I loved the audiobook version more. Gaiman reads the story himself with the most amazing English accent. This one is a feel-good book for me. I re-read it several times and listened to it more than once. Every time I discover something new. 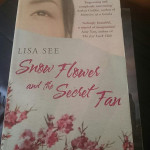 This is the story that made my cry, something that rarely happens. I’ll never forget reading the last pages with tears flowing freely.

In nineteenth-century China, in a remote Hunan county, seven-year-old Lily is paired with a laotong, an “old same”. This is an emotional match destined to last a lifetime. The two find solace in their friendship, developing a bond that keeps their spirits alive. But when a misunderstanding arises, their relationship suddenly threatens to tear them apart.

A good book will always make you feel something. This one touched me deeply, which is something I want when I dive into a book. No, I don’t want to cry every time I read a book, and yes, I also want books that make me laugh. But this one—wow. I also learned a lot about Chinese culture, which is a plus.

I stumbled across this book in the old airport in Oslo (Fornebu), that later closed in 1998. The author was unknown to me. I’ve since re-read it several times and I’m severely tempted to pick it up again. This is no simple murder mystery. It’s really about the loner, Miss Smilla, and Greenland and its inhabitants. It starts in the cold climate of urban Copenhagen and ends in the fjords and glaciers of Smilla’s Greenland homeland. Smilla is a scientist, rationalist, mathematician and expert on snow and ice in all its forms, with a father who is a Danish medical specialist, and a mother who is a Greenlandic traditional hunter. I remember reading a scene and then re-reading it aloud to myself, simply to taste the words. It is another one of those books that doesn’t let you forget it.

Astrid Ohletz is CEO of Ylva Publishing. Being able to publish books where subtext is maintext is a dream come true for Astrid. In her free time, she writes stories under the pseudonym Emma Weimann.