Busy author KL Hughes, whose heartwarming romantic comedy, Popcorn Love, was one of Ylva bestsellers this year, recently took time out to talk with us. We asked her questions about becoming a writer, about Popcorn Love’s protagonist Elena Vega’s Latina heritage, and about how to write kids. 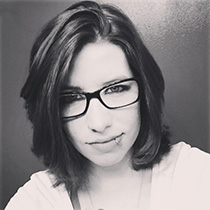 Congratulations on the success of Popcorn Love! For those few who haven’t read it yet, how would you describe what the story is about?

Thank you! The story is about two young women, Elena Vega and Allison Sawyer. Elena is a no-nonsense, wealthy, single mother who is a bit of a workaholic and whose love life suffers the consequences. Her best friend, Vivian, convinces her to give blind dating a try, for which Vivian herself provides the dates. Elena agrees on the condition of Vivian finding a suitable babysitter for her young son, Lucas. Vivian introduces her to Allison Sawyer, who is a hilarious, fun-loving, and broke college senior, who instantly hits it off with Lucas and with Elena as well. Elena takes her on as a babysitter, and when the blind dates begin, she finds herself bonding with Allison after each one. As they grow closer, they start to realize there might be something there worth pursuing. This story is really about bridging gaps, finding love in unexpected places and circumstances. It’s the story of two people who are complete opposites in nearly every sense but who still somehow manage to fit one another in all the best ways.

Tell us a little about yourself. How did you decide to become a writer?

I am really just an overly emotional, art-loving, travel-loving, life-loving nerd with a wonderful wife and family, and an adorable Dalmatian. I never really imagined myself being anything other than a writer. I considered other careers, worried about how I would make a living or if I had the talent and the perseverance to pursue writing as a career, but in the end, it was the best option for me. Writing has always been my greatest passion. It started with poetry when I was just nine years old, and it grew and grew as I got older, until I couldn’t see myself pursuing anything other than writing. I studied Theatre Arts, Creative Writing, and Literature when I was in college, and it only fueled my passion and my desire to grow as a writer and to make a life of it. I’ve never once looked back. I knew, even when I was a kid that this was it for me, and I haven’t wavered from that.

Popcorn Love is about an unlikely romance between Elena Vega and Allison Sawyer, two very different personalities from quite different socioeconomic backgrounds. Why do you think they work as a couple?

You know, when I was a kid and I would lose something, my grandma would always say that I would find it where I least expected it to be. I think that really rings true for a lot of things in life, including love and romance and connection. I think that often, our matches in life are the people we least expect or people we wouldn’t imagine ourselves fitting so perfectly with. I think you can be completely opposite a person but match them on a deeper level. Sometimes, it is just a matter of being able to suit one another’s needs and sometimes it is more than that. With Elena and Allison, yes, they are complete opposites, but that really serves their relationship, in the sense that they are able to provide one another with something that they don’t have on their own or have been unable to find in those too similar to them. Allison is so easy-going, spontaneous, impulsive, and comedic despite all that she has been through in her life, while Elena, on the other hand, is more reserved, refined, and meticulous. Allison is able to bring Elena out of her shell, make her laugh more and feel more carefree, younger, and Elena is able to provide Allison with the stability and support, the love and sense of family that she has been seeking all her life. They suit one another in that they are exactly what the other needs and has been searching for.

Which character in the book do you think you are most like?

I can connect in different ways with both Elena and Allison, like having Elena’s motherly instincts and sarcasm and having Allison’s love of music and literature, but I think I am most like Allison. I share her sense of humor and her need for and craving of human connection, her subtly expressed but deep-running insecurities about being wanted and needed and loved. I connected a lot with her.

What did you learn from writing this book?

Always trust your instincts, even when others disagree. It’s easy, I think, to question your choices as an artist when it becomes subject to other people’s opinions. It’s easy to start to question yourself, and doubt yourself, and tear yourself down, but throughout the process of writing this book, my confidence and comfort improved a lot. It’s important to learn from every experience and from other artists and from critique, but I think it is just as important to trust yourself.

Elena is a Latina woman, something you don’t see every day in lesbian romance books. The Vega family takes their heritage seriously, and there are snippets of Spanish peppered throughout the book. What made you decide to do that?

We need more romance literature featuring lead characters of color. We need more diversity in romance literature where ethnicity, nationality, language, culture, heritage, sexuality, religion, and more are concerned, and not just in romance literature but in all genres. It is just that simple. All people deserve to see themselves reflected in art and media—in love stories, in stories of success, in stories of hope and humor and accomplishment, and in stories of overcoming; in all stories. All people deserve to see themselves in the art they are consuming, and I hope to improve in pushing toward that not only in my own works but in encouraging others to do so as well.

A supporting character who is very important in the book is Lucas, Elena’s precocious four-year-old son. Those kinds of characters can be easy to sideline in a romance that is, after all, about two adults falling in love. How did you keep Lucas in the foreground so that he felt real and still keep the story about Elena and Allison?

I wanted Lucas’s presence in the book to reflect the importance of his presence in Elena’s life. She is a single mother, and her son is her number one. She isn’t going to sideline him for anyone, so his presence and Allison’s relationship with him is very important as it plays a big part in their overall connection and ability to work as a family.

Lucas is, as you mentioned, very precocious. Elena has put a lot of work into teaching him from a very young age, and he is quite advanced for his age. That shows in many of his interactions with others. I wanted to balance that with his more childlike tendencies and traits—his impatience, his fits, his repetition, and his outbursts. I drew a lot from my experiences with my nieces and nephews, and that shaped a lot of how I constructed this character.

Children are frequently sidelined in fiction, especially romantic fiction. I’ve noticed, while reading, that often when a character involved in the main romantic plot has a child, the child is typically only ever seen a few times and in very short scenes, and I think it perpetuates this idea that children are a burden on romance or romantic connection. I wanted to integrate Lucas into the plot in a way that showed how immensely important he is in his mother’s life and how important he remains in her romantic relationship, still very much a priority, and yes, he does (as all children do) at times interrupt certain activities, but that felt very authentic to me. This story is just as much about family as it is about romance. I wanted to maintain that throughout, and Lucas was a big part of that. He is, after all, the reason Elena and Allison meet in the first place!

Which scene in Popcorn Love was the hardest for you to write?

Elena’s more unfortunate dates and Allison and Elena’s encounter with the Nora Vega Inquisition were all difficult scenes to write just because I felt so much secondhand mortification for them! Imagining the feeling of all that awkward tension—it really gets in your bones when you’re writing scenes like that. They were fun to write, though!

What are you currently reading? Which writers do you admire or feel influenced you?

I’m not currently reading anything. I’ve been very focused on my writing lately, so I’ve had little extra time for reading. I’ve been influenced by a lot of different writers, in various ways, primarily in the sense of being moved by a work or finding that character that you can really relate to or reading that one line that really cracks you open and changes your perspective. I’ve been more influenced, I think, by poets, like EE Cummings and Pablo Neruda, Carol Ann Duffy, but I’ve loved and been influenced by many novelists as well—Alice Walker, J.K. Rowling, Suzanne Collins, Fannie Flagg, C.S. Lewis, and so many others.

Are you working on a new novel? What can your readers expect next from you?

I have a few projects in the works, yes. As for what I will next release, I’m not yet sure, but I look forward to sharing more of my work with readers soon.

How can your readers stay in touch with you?
Readers can contact me by email at authorklhughes@gmail.com, or they can connect with me through social media on Twitter (@Chrmdpoet) or Tumblr (chrmdpoet.tumblr.com).

Thanks for talking with us, KL.

Buy Popcorn Love in e-book format at the Ylva online shop and at all major online platforms.