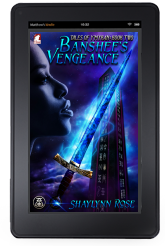 Shaylynn Rose, author of the recently released Banshee’s Vengeance— the second  book in the Tales of Y’Myran series—had an interesting chat with us not long ago about getting the chance to update and expand her out-of-print Banshee’s Honor into a series, about the dream that inspired the novel, and about why she writes lesbian fiction.  We think you’ll find her as interesting as we do. Enjoy!

At its heart, Banshee’s Honor is fantasy. As for what it’s about…I’d say it’s about people finding hope amid a series of terrible events. For the main character, Azhani Rhu’len, it’s about how to live even after everything she held precious and dear is taken from her.

A dream. The first chapter (discounting the prologue, which came later, when the story was taking shape on the page) was a vivid dream that woke me in the midst of a sound sleep. It sent me racing for my computer—I typed for almost two hours solid, then shared it with a dear friend named Ciegra. She was so excited that she promised to read every bit of it—even though she didn’t much like fantasy as a genre.

It’s hard to choose an overall favorite. I love them all, though I’m most partial to Kyrian, in terms of personality. In terms of the overall story, though, my favorite character is Hardag the fruit seller.  He was for me the “eye of the common man” in Y’Dan—and that was, I think, very necessary for the “flavor” of the story.

Azhani is the most determined person I’ve ever written. Once she sets her mind to a task, she will see it through or die trying. She also has a hidden sense of humor that likes to appear without warning. Kyrian is a well of compassion, but not naive. I also like that she struggles with her initial feelings about Azhani—forcing herself to look beyond what she knows about her as a public person and what she’s learning in the moment.

In good conscience, I can’t say they were entirely made up. I know they were deeply influenced by characters from many movies, television shows, and books. Their archetypes are fairly common in terms of fantasy novels. What makes them unique, I hope, is how they are written in terms of the world they inhabit.

My favorite part about writing it the first time was all the excitement of telling a story in a world of my own making. I’ve always been a storyteller: from an early age, I enjoyed roleplaying games, taking on the task of Game Master or Dungeon Master more often than not. Even as a child going through elementary school, I wrote poetry and short stories. Banshee’s Honor was a culmination of those things, plus what I’d learned while writing fan fiction for television shows like Xena: Warrior Princess and Buffy the Vampire Slayer. The rewrite was even more exciting for me, because in the intervening years, my confidence had grown, allowing me to explore narrative possibilities I’d only briefly considered before—as well as giving me the chance to expand various areas of the original story that needed it.

Wild. It always feels so incredible to hear that people enjoy the stories I tell. To discover my work was liked enough not to be published once, but twice—well, that’s just amazing! And humbling.

I wanted to tell stories that weren’t there in the books I wanted to read. The Internet, I think, has allowed people to tell more and more varied stories—giving people who might not otherwise have a chance to use their voices the opportunity to do so. Fan fiction in particular has really led to a lovely evolution of great stories—but back when Banshee’s Honor was originally written, there weren’t many fantasy-based stories. I’m a huge fantasy and science fiction nut, so it just seemed natural to write in that genre.

In my own genre, non-lesbian based, without a doubt, Mercedes Lackey is my favorite writer. Her world building is incredible. Anne McCaffrey, David Eddings, Piers Anthony, Tom Deitz, Barry Hughart, Raymond Feist, and Charles deLint are some of my other go-to authors. For lesbian authors, I’d have to say Jane Fletcher, Nene Adams, and Fletcher DeLancey.

Book wise—anything set in the Valdemar series by Mercedes Lackey, though I think her Bardic Voices books are underrated. I’m also a real fan of Lois C. Hart’s Coming Home and Fletcher DeLancey’s Without A Front. Melissa Good‘s books are among my “relaxation time” favorites, as well.

Hm. That’s a tough question to answer, since it seems like I do spend the better part of my days writing. But when I’m not putting fingers to keyboard, I like to make jewelry, crochet, read, and spend too much time playing with fractals in Photoshop. I should also add that I am an avid gamer, even though my current computer is about as lame as lame gets. My current love is Fallout 3. And yes, I’m squee-level excited about Fallout 4, even if I don’t get to play it myself. I’ll watch my favorite Let’s Play folks on YouTube!

I have journals with poetry and stories in them that go back to elementary school. In California, where I grew up, we had yearly contests for writing and creating our own picture books. Somewhere, my mother still has the few I produced—one of which has an “about the author” that says, “When I grow up, I want to be a published author.”

Guess what, fifth-grade self?  You made it!

I am. Next up is Banshee’s Vengeance [just released Nov. 25], but after that, I’m hoping to finish another book or two set in the same world as Banshee’s Honor and Banshee’s Vengeance. I also have a few other stories floating around that get worked on from time to time. It’s all about a buffet of choice for me—if I can’t make my thoughts run in one direction, I have ten more I can follow. Hopefully, this will help me avoid the dreaded “writer’s block” that some people insist doesn’t exist.

I am reachable through my email at shaych3@yahoo.com!
Thanks for talking with us, Shaylynn.