A.L. Brooks tackles the ageist tendencies of the movie business, coming out late in life, and being true to yourself—all in one sizzling lesbian romance novel. In this interview she talks to us about her lesfic book Write Your Own Script. 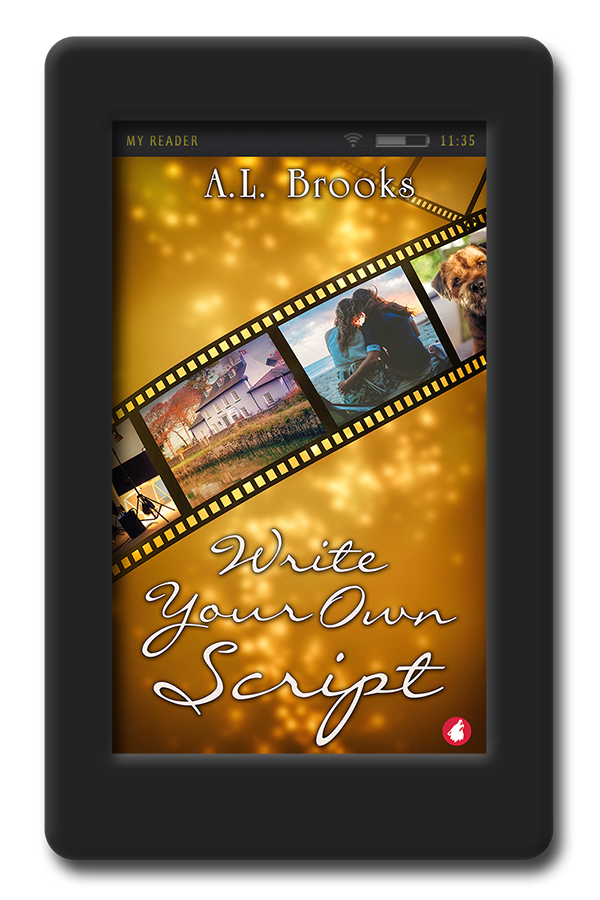 In your own words, can you tell us what Write Your Own Script is all about? And how is this book connected to your novel Dare to Love?

The story in Write Your Own Script centers around Tamsyn Harris, a famous British actress. She’s 51 and reaching that point in her career where film and TV roles are drying up—she’s considered too old for the lead in romantic movies or those more action-based, but too young to be playing grandmothers, etc. She’s frustrated and angry at the way women her age are treated in the media, and verbally lashes out at a young director on the set of her latest film. Her agent, Carmen, suggests she retreat for a few weeks to let things calm down, and books her into a quiet cottage in the Norfolk countryside.

While there, Tamsyn bumps into the resident of the other cottage on the site, Maggie, a writer suffering from burnout after publishing numerous novels under two different pen names in two very different markets. There’s an instant attraction between them, much to Maggie’s surprise because Tamsyn is not out publicly. As their connection deepens, Tamsyn has to face up to what being closeted has meant all this time, and whether she wants to remain so, given her career is already flagging.

The story is connected to Dare to Love through the character of Carmen. She’s Tamsyn’s agent and friend in Write Your Own Script, and she plays a pivotal role in helping Tamsyn through figuring out what she truly wants from life. And through this, Carmen comes to realize what’s missing from her own life, and that’s where her story picks up in Dare to Love.

In what ways are Write Your Own Script and Dare to Love similar to or different from each other?

They’re similar in that they both feature aspects of coming out. For Tamsyn, it’s not the realization of her own sexuality, which she figured out decades before. It’s all about whether she can be publicly out and what it would mean for her career in the future. For Carmen in Dare to Love, it’s the discovery, much to her surprise, at the age of 43, that she’s attracted to women. Well, to one woman in particular, Ash. As a result, Tamsyn and Maggie are good people for Carmen to talk to about her burgeoning feelings, given they both went through the same process, albeit when they were much younger.

In both books I wanted to explore what coming out actually means for people in different situations. Those of us who are out know it isn’t easy, and it’s never a one-time thing—I’ve been out to myself and my family for more than 30 years, but I probably ‘come out’ again at least six or seven times a year, for example to new colleagues at work, or fellow students in my German classes, etc. For Tamsyn, that’s never been possible because she made the decision early in her career that being out would be too damaging.

Carmen is in a completely different position in Dare to Love. This late realization that her sexuality isn’t 100% straight won’t affect her career, but the internal confusion it causes her is the main thing she has to come to terms with. So, in both books, each main character is facing a big decision in life centered around their sexuality, but in very different ways.

What do you think lesbian romance readers will love most about this story?

I think readers will enjoy the connection between Tamsyn and Maggie, which is strong and very sexy from the start. But also how that evolves from something physical to something so much more, something that really challenges Tamsyn’s long-held belief that she should stay closeted, and what her reaction to the situation is. I think everyone will also fall in love with Maggie’s dog, Gizmo, who’s super cute!

Your WLW protagonists Tamsyn and Maggie are both renowned in their fields. How does their stardom affect their private lives and their mental health?

Exploring the mental health consequences of success was definitely a theme I wanted to focus on in this story. Tamsyn is successful but lonely, whether she’ll admit it or not. Maggie is successful but exhausted. When they meet at the cottage retreat in Norfolk, they’re both vulnerable and questioning so much about their lives. In that respect, the passionate adventure they start is a good physical outlet for each. But once feelings get involved, not just lust, then they both realize how their life situations mean that a relationship isn’t possible without some significant changes. And it’s those changes and how they deal with them that is the focus of the second part of the book.

What was your favorite scene to write in Write Your Own Script?

Oh, this is a hard question! There are a few favorite scenes. But if you make me choose one, then I’d say (without spoilers!) it’s the scene where Carmen travels to Sardinia to see Tamsyn, who is having a crisis over a book she’s just read. The realization Carmen coaxes out of Tamsyn is so important and I got all the feels as I wrote it.

Is there something special you like to do to celebrate the release of a new lesbian romance book?

Well, I always like to drink a chilled glass of Sekt to celebrate! Although not first thing on the morning of the book’s release, I hasten to add—I do wait until the evening!

A.L. Brooks was born in the UK but currently resides in Frankfurt, Germany, and over the years has lived in places as far afield as Aberdeen and Australia. She works 9–5 in corporate financial systems, and her dream is to take early retirement. Like, tomorrow, please. She loves her gym membership and is very grateful for it, as she also loves dark chocolate. She enjoys drinking good wine and craft beer, trying out new recipes, and learning German. Travelling around the world and reading lots and lots (and lots) of books are also things that fight for time with her writing. Yep, she really needs that early retirement.