To be or not to be an ice queen: Quinn Ivins on her lesbian romance novel Worthy of Love

Worthy of Love is an age-gap, workplace lesbian romance novel with a plus size, neurodiverse main character and a BIPOC main character who learn that you’re never too broken to be worthy of love. In this interview, author Quinn Ivins tells us why it’s hard to pinpoint if main character Nadine can be categorized as an ice queen. This is her first book to be translated into German by Ylva Publishing, as Was ich in dir sehe. 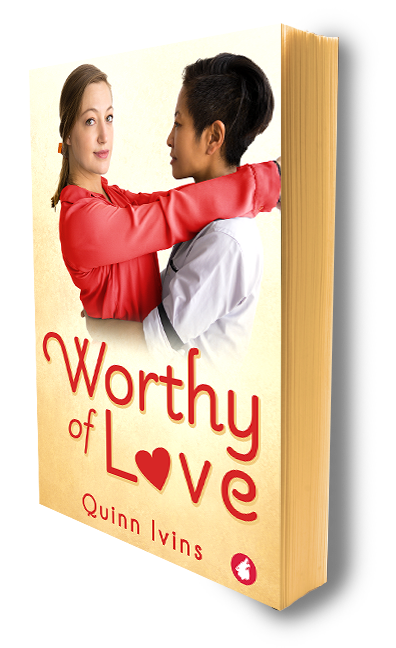 Can you tell us in your own words what your lesbian romance novel Worthy of Love is all about?

Nadine is a disgraced former attorney, fresh out of prison, who ends up working at a crappy overstock retailer in rural Virginia. There she meets Bella, a sweet Southern femme who offers Nadine friendship and a place to stay.

Sharing a small apartment, the two women can’t help falling for each other, but Nadine doesn’t feel worthy of Bella due to her past and her reputation. Meanwhile, Bella worries she isn’t smart enough for Nadine. They both need to overcome self-doubt to find happiness.

What inspired you to write a novel centered on a character who is widely hated in the public eye?

Nadine’s story is loosely inspired by a scandal in the United States involving Michael Cohen, Donald Trump’s personal attorney, who went to prison for campaign finance crimes. This was appealing to me because I wanted to write about a character who used to be powerful before she lost all her money and friends. It forces her to be present in a very different world, suburban retail, because she doesn’t have anything else going on. This gave her a chance to meet and get to know Bella, someone she never would have met in her former life.

I chose a retail setting because it’s completely different from high-profile politics. It’s also a great setting to play with different personality types and humorous situations. Much of the comic relief comes from the characters’ coworkers and the customers who visit the store, and that was fun to write.

Truthfully, I didn’t need to do much research on politics or retail. I’m a politics junkie who follows all the scandals, and I worked a retail job in college. Some of the stories about ornery customers and incompetent managers come from my own experience—for example, I had customers who tried to return products they’d bought years ago.

The part that required the most research was the federal probation system. I talked to a probation officer who gave me a lot of great insight, in addition to reading about it and watching Orange is the New Black.

Which character of Worthy of Love was the most fun for you to write?

It’s hard to choose because I had fun with all the characters. Of the two mains, Bella was the most fun because I got to poke fun at some of my own habits and quirks as a fairly disorganized creative person. Nadine gave me a chance to write about my wife’s Filipino language and culture, which was also fun.

But I have to say, some of the side characters cracked me up the most—such as Bella and Nadine’s coworker, Kenny, a sheltered teenager who hates swearing.

What are the themes and tropes you like writing about the most?

I love age gaps and ice queen characters. Nadine isn’t really an ice queen in Worthy of Love—she’s more of a formerice queen who lost her power and her swagger when she went to prison. But she retains all the qualities that makes ice queens so hot—she’s smart and tough with a healthy sprinkling of sarcasm.

What do you think readers can learn from your main characters?

Bella flunked out of college and continues to struggle with organization and math. At first, she thinks she isn’t smart enough, but (with help from Nadine) she learns that something else is going on. I hope the book teaches readers about neurodiversity and maybe helps someone who has similar struggles.

As for Nadine, lesson number one is that campaign finance laws are no joke. But the most important lesson is not to let other people’s opinions determine your self-worth. 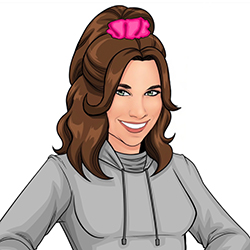 Quinn Ivins has been addicted to reading romance since she was a teenager, when she stayed up late on school nights to read more X-Files fanfiction. After romance novels, her top vices include sugar, booze, cable news, and country music.

Quinn lives in the southern United States with her wife, their young son, and their adorable cat. When she isn’t working her day job, writing fiction, or chasing her toddler, she gets as much sleep as she can.