Daniela Zysk was a lesbian activist in various large queer organisations and projects for over 25 years. She works now for Ylva Publishing as Finance & Diversity Manager. In this blogpost she talks about how important lesbian books were for her coming out and the time after.

My first lesbian love was books. I still remember today how, even as a child, I looked for lesbian content in every book.
Oh, how I wished that in Der Trotzkopf, the main character, Ilse Macket, and her school friend Nellie could fall in love and together escape the whole patriarchal and sexist nightmare.

Without knowing it, I devoured children’s books and books for young people to find the hint of lesbian love somewhere. In the early 80s, unfortunately, my search was in vain. Of course, I didn’t know at the time why I had these thoughts. And I didn’t know that others didn’t have these thoughts, either. 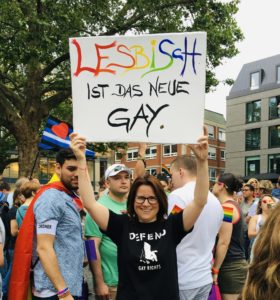 When I was fifteen, I fell unhappily in love with my best heterosexual girlfriend, and after many weeks full of tears, it was clear to me that my feelings for a woman did not conform to the usual procedure. I don’t remember exactly when I found the word “lesbian” for myself, but I knew what to look for after my inner coming-out. As a bookworm, of course, first in literary form.

In detective-like detail, I set about finding and reading as many lesbian works as possible. In the days before the internet, that meant scouring libraries and finding the women’s bookstore in the nearest big city. Oh, that feeling of finally holding a new lesbian novel in my hands, one that had a happy ending. I can still feel that emotional high today when I see these works on my bookshelf.

How wonderful it was to read Strange Wine or Stoner McTavish for the first time. All these great books from the various women’s book publishers. It was like being newly in love. There have been many, many more moments like that since. First through novels, then later through fanfiction. These stories were, and still are, my emotional shield against this often so grey world. Whenever life turns into a rollercoaster ride for me, I know that the saving shore is just a reach into the bookshelf or the Kindle shop away.

As a vegan animal rights activist, I am thrilled to see the word “vegan” making its way into more and more stories. Unfortunately, all too often it is still with a negative undertone. As if empathy towards other living beings is a negative lesbian stereotype that has to be shaken off immediately. But there are already the first books with vegan main characters, and that’s something that will surely increase over time.

At animal rights events I attend, I often meet more lesbian and queer women than at many LGBT*IQ events. So the market for vegan heroines should be there.

Lesbians in films, series, and fanfiction

My second love was lesbian film. That love, however, has been put to the test too much in recent years and has cooled down a bit as a result. The production of these films is getting better and better, but the content is too often interchangeable and too rarely shows a realistic or even positive image of lesbian love.
On the plus side, even bad films and TV series encourage writers to keep writing write even better fanfiction about women. Now let’s be honest. Everything after season 1 of Once Upon a Time was kids’ crap! But what wonderful fanfictions came out of it, just like many other series before and after. Pretend hetero pairings in TV series are not interesting for lesbians. They wait for that one special look between two women, and suddenly a whole new world opens up for them. A world that is transformed into epic lesbian love stories by talented authors and hundreds of thousands of words.
There are women who look down on lesbian romance as if it were chewing gum under the soles of their feet. There have been comments that lesbians are no longer interested in women’s political books because of these kinds of books. The downfall of the lesbian West, so to speak.

Thank you, lesbian publishers and authors!

I personally celebrate you, dear authors and publishers. I celebrate you because many successful things in my life would not have been possible without the visibility of happy endings.

Visibility that you have given me with your books and continue to give me every day.

Daniela Zysk was born and raised in the Swabian province of Germany and was active for more than 25 years as a lesbian activist in various large queer organisations and projects. For some time now, she has dedicated herself to the issue of animal liberation and has noticed that the oppression and exploitation of animals is very similar to that of human minorities and women. She works for Ylva Publishing as Finance & Diversity Manager. She is also the founder of www.snehacare.de.