With Kicker’s Journey, why did you write a lesbian historical romance, and did anything surprise you about researching life in 1899? 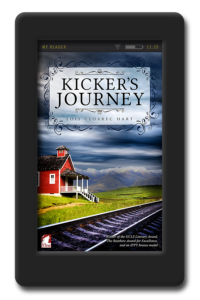 Because my wife and I have spent almost two decades separated by a border, we have found many ways to stay connected during the annual six months we spend apart. One way in the early aughts was to write short stories for one another.

Victorian England was an era that has always fascinated me. One of the earliest books that had a deep impact on me as a child was an old copy of Oliver Twist. I found the book at my grandmother’s farm and reread it frequently. So, when I began to write a new story for my wife in 2002, I set the short piece in late 19th century England. As I was also contributing stories to the (Xena fan-fiction archive) Academy of Bards’ Valentine and Halloween specials at the time, I expanded on that short story to submit to their 2003 Valentine special as Kicker’s Heart.

I generally write a short story, and I am done with the characters. But Kicker’s and Madelyn’s story felt incomplete. It was one of the rare occasions when I very much wanted to find out what happened to them next. So, I took Kicker’s Heart as my foundation and sought to create a lesbian historical romance that honoured the sweep and depth of an old-fashioned story such as Oliver Twist. Five years later, I ended up with Kicker’s Journey.

I was incredibly fortunate while researching Kicker’s Journey to find an “Unabridged facsimile of Montgomery Ward & Co’s Catalogue No. 57 for the Spring and Summer of 1895.” 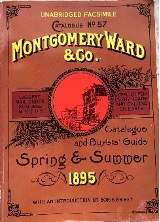 The original Montgomery Ward company was a Chicago-based pioneer of mail-order retailing that was in business from 1872 to 2001. The catalogue listed everything from saddles to sewing machines, and shotguns to satin goods.
It was a goldmine of information about the everyday necessities of ordinary people. Particularly in rural areas such as my imaginary town in the foothills of the Alberta Rockies, Galbraith’s Crossing, where Kicker and Madelyn ultimately settled.

Though the details I extracted from this catalogue were not critical to moving the plot along, they did create a realistic setting that conveyed the flavour of that era in western Canada.

At the opposite end of the spectrum, I once set out to find how long it would take a train to get from London to Liverpool in 1899. And as I kept getting distracted by interesting links, it took me five hours to locate the information I needed!

How did you come up with the character of Kicker Stuart? Were there many women hostlers (horse handlers) back in the day?

I had to stretch historical accuracy for this historical lesbian romance to create a plot in which Kicker’s unique circumstances allowed her to live a non-traditional life. Victorians had rigid ideas of what a woman’s lot should be.

The late Victorian era was a time of rising social tumult. The British Empire was contracting, and fever for domestic change drove angry people to the streets, demanding their share of the national pie.

Many well-born women, such as Emmeline Pankhurst, fought for women’s suffrage, but Kicker had no such ambitions or illusions. She was keenly aware of her working-class birth, determined not to overstep her social boundaries. She was simply grateful that, thanks to her brother, she had found a home in the stables of Grindleshire Academy for Young Ladies.

How restrictive would life have been for Madelyn Bristow, a teacher at a school for young ladies in your historical lesbian romance?

Thanks to her upper-middle-class background, Madelyn had more options than Kicker. But she was mindful of the customs of her gender and class.

Madelyn had fended off parental demands that she give up her teaching career, make a good marriage, and spend the rest of her life managing her husband’s household. And raising their children.

She fought hard for every scrap of self-determination and independence, including her secret choice of an unorthodox lover.

Romantic friendships between wealthy single women, also known as “Boston marriages,” were not uncommon or particularly scandalous during this era. But such a relationship between women from opposite sides of the class barrier would have been utterly shocking to Victorian society.

Madelyn knew Kicker would never break the unwritten rules of their culture, so she made the first move and openly declared her feelings to her shocked love. However, to build a life together, as unfettered by conventional mores as possible, they were compelled to cross an ocean, leaving all they knew behind.

* Kicker’s Journey, a historical lesbian romance, is free to readers on November 15, 2020, at the Ylva shop.

Free Book Sundays are Ylva’s way of giving something back and offering escapism in difficult times for readers.

To stay up to date with all our latest books and announcements, subscribe to Ylva’s newsletter.