Shattered is about a disillusioned lesbian superhero, but do you see it as part of the sci-fi genre? 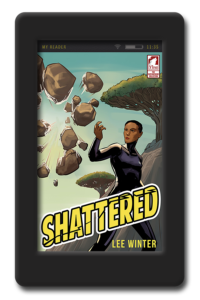 Not really. I mean, yes, of course, it is sci-fi because she is a superhero, and Earth’s first lesbian superhero, no less,  in my universe. She wears the outfit, has a special skill of being able to hurl huge objects, and shatter them, but that’s almost beside the point of the book.

At its core, Shattered is about two incredibly different women who disagree on almost everything, forced to sit down as a storm literally rages around them, and find common ground.

That’s a difficult thing when one of the women (the superhero Nyah/Shattergirl) just wants to hide out at the ends of the earth, and the other, Lena, a tracker, wants to drag her back to civilization.

Most of the book is a conversation. It starts as an argument: Does a superhero get to deprive us of her incredible skills given Earth saved her life? Does she have that right to walk away just because she’s mad at being outed as a lesbian superhero? That’s how Lena sees her position at least, and she’s in for an education.

From this fight emerges a connection that begins intellectually. Then emotionally. Then briefly physically, before finally they reach an understanding that is a deep, soul-connected friendship. What they come to feel and share is an exploration and realization of what it means to be human.

Why did you make your lesbian superhero a woman of color?

Two reasons. One, I feel lesbian fiction, including sci-fi, is so very white. I’d love a million more books with diversity of every stripe, but especially BIPoC. I decided to stop just talking about it and write my own. On that note, I want to give a shout out to my sensitivity reader, author KD Williamson.

Two, my group of stranded superheroes, called guardians, landed on earth in the middle of World War I, in the early 1900s. The people who had the least rights back then were women of color.

Imagine being a highly regarded scientist, the best of your kind, being demoted to the least powerful, most voiceless, the moment you stepped on a new planet called Earth.

I wanted Nyah’s anger at humanity to be believable and properly rooted in a real wrong; an ongoing wrong. That would undeniably be the case if she were black.

If racism was a big issue for your superhero when Nyah first landed, how did society react to her being a lesbian too?

Neither of these traits should have been an issue, of course. Nyah deserved to be feted as magnificent. Her superior alien knowledge alone would have been priceless, if people had been willing to listen.

Instead, even with all her intelligence, wisdom, and strength, she was rendered powerless and invisible. And that was before anyone found out she was a lesbian superhero. Her very existence as black and brilliant challenged how those in power thought things should be, so she kept her sexuality a deep secret.

Times and attitudes moved on from the early 1900s. But even when humanity evolved, Nyah went from being minimized to someone to be exploited. That was an inevitable side effect of her hero job and fame.

It also meant she was always watched and couldn’t have any privacy, so her love life suffered. Then came her public outing. From that moment on she was no longer seen as anything except the “lesbian superhero.”

So I wanted her decision to disappear, leaving humanity to its dumpster fire, to feel completely justified. That she walked instead of putting up with our crap for even a minute longer fills me with awe and admiration.

I love how strong she is. I’d go weak at the knees if I ever met her. Society might dismiss her as just “the lesbian superhero” but to me she is utterly formidable.

Are there any modern-day parallels in your book? It’s hard not to notice the guardians’ leader is a barrel-chested man who wears orange, uses media to woo the masses, and talks like a used-car salesman.

Yes, Talon Man definitely has certain qualities that might mirror a particular world leader, especially Tal’s manipulation of social media, to always paint himself as the hero. However, at the time I wrote Shattered, I had no idea how much Trump would dominate and control international news feeds the way Tal succeeded in my book.

* Shattered, Lee Winter’s lesbian superhero novel, is free to readers on November 8, 2020, at the Ylva shop.

Free Book Sundays are Ylva’s way of giving back and offering escapism in difficult times for readers.