Indelicates.com states: ‘The closest two definitions [of ‘trope’] I can attempt are: 1. Anything at all which has been in at least two fictions and 2. A Cliché.’ The writer—Simon Indelicate, aptly named—explicitly states that we should not use the term, that there are a) other words out there that are more accurate, and b) the word is also meaningless (in the first definition). Although this is an interesting viewpoint on tropes, agreeing would mean this blog would finish right here.

Merriam-Webster defines a trope as ‘a common or overused theme or device’. I think this is a pretty simple and accurate way of defining a trope, especially when you wish to be objective.

These days, in lesbian media, it seems there are two types of trope. The positive type, where readers and viewers identify which tropes they like and spend their money accordingly. Then we encounter the negative types of trope, the main example for me currently being the ‘bury your gays’ trope, as discussed by viewers of Holby City. This seems to be mostly within more contemporary fiction—TV and film—and causes the majority of the outrage when it comes to tropes. 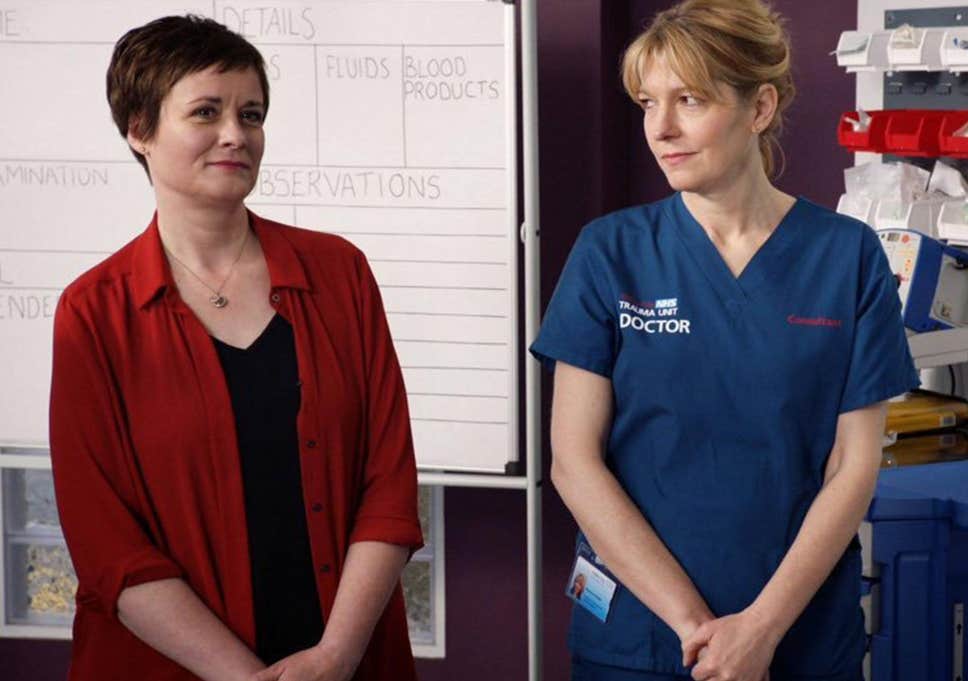 picture courtesy of the bbc

Authors of positive types of tropes take them as their own and embrace the fact that they are known for certain tropes. Some literary publishers of lesbian/women loving women fiction run ‘theme months’ where they promote books that fall into certain tropes; ‘age gap’, ‘workplace romance’ and the classic ‘ice queen’ tropes are popular. Sometimes these occur in other media: ‘fake relationship, ‘gender-conceal’, etc, tend to go down well with the masses and are good plot devices for a mash-up of comedy and conflict.

Some can be viewed as both positive and negative, depending on the story and the representation used. The ‘token lesbian’ is one of these: either ‘isn’t it great that we’re represented? That’s about right, one person in ten, hmm?’—this particularly is significant in mainstream media where lesbians rarely appear. You then have the more pessimistic ‘Oh they always have to have the token lesbian, don’t they? She’s only in it to be a lesbian, she won’t have any back-story, her character won’t be three-dimensional, and she’ll probably be represented as asexual with no need to have a filling relationship’.

Luckily, in lesbian fiction, if this specific trope is in fact used at all—how many lesfic novels do you know where there is only one lesbian character?—the ‘token lesbian’ will be chiefly portrayed as a person of wonder. Others will fall in love with her or at least want to get to know her. She’ll be one of the main characters (when in the romance genre) and the other main character will probably think she is just brilliant. This was the trope I inadvertently used in Hooked On You, where a previously straight character falls in love with a lesbian who teaches crochet. Score one TropePoint for Jenn.

At least the ‘token lesbian’ trope doesn’t force anyone to die. For those that don’t watch Holby, it went like this: viewers were assured no tropes would be used (in so many words), then the producers went about killing off the lesbian character with the sole reason to enable another character’s storyline to progress. The argument is that there were other ways of creating the necessary drama than simply killing off Bernie Wolfe—the couple had broken up and she was in another country. The ‘bury your gays’ trope, perhaps, in full force. Many people, understandably, were upset by how the entire thing was handled.

It’s easy to argue the toss: was this simply another storyline, regardless of the character’s sexuality, where someone died? This happens a lot in TV drama and over the last couple of years, a lot of straight characters have died on Holby. Taking out the issue of the show’s promotional tactics, someone not connected to the Holby social media forums would probably shrug and be sad about it and move on to the next thing.

Those that were, felt Holby’s producers did not understand how upset the ‘bury your gays’ trope made them feel. Perhaps this is a good example of the divide between those marginalised by their LGBT status and those within heteronormative society being a barrier to understanding, especially as long as LGBT people do not feel listened to by those that create the media they consume.

Similar negative tropes are: ‘cheating bisexual’ (usually with a man, but not always), ‘psycho lesbian’ and—obviously—the more specific ‘predatory lesbian’, who will stop at nothing to bed all the women within a forty mile radius. These are clichés and rarely accurate, stemming from decades of homophobia and the law being on the side of heteronormative society.

Listening to your Audience

In conclusion, there are two modes of thinking. Tropes can be useful to define the type of story being told. They are used as a thematic ‘pick and mix’, for readers and viewers to dive into and go ‘okay, that’s a trope I like to read/watch, I’ll go for that’. In the same way, tropes can benefit the promoters of books/media in order for them to categorise a certain story and use that to entice consumers.

On the other side of the coin, it may be sensible to avoid tropes if you are not in the LGBT community. Having an LGBT character die, in the ‘bury your gays’ trope, when you have no other option, may be irritating to those wishing to see good representation. Tropes where LGBT characters are portrayed in a less-than-positive light could also be avoided, although this implies that all LGBT people are positive and have no flaws, which is obviously not accurate.

In further conclusion, be aware of your audience. You can never please everyone, but listening to those paying for and consuming the stories you create is imperative to your contribution to a kind and understanding society. And, please, try not to kill anyone in the process.

Jenn Matthews lives in England’s South West with her wife, dog, and cat.

Inspired by life’s lessons and experiences, Jenn is a passionate advocate of people on the fringe of society. She hopes to explore and represent other “invisible people” with her upcoming novels. Find Jenn’s books on the Ylva site!