Why Football is the Most Romantic Lesbian Sport

Catherine Lane discusses her love of American football and why she thinks it’s the most romantic lesbian sport.

Romantic and football are not two words you usually string together. American football is a game of hard hits and precision strategy. A game of intense rivalries and desperate Hail Mary passes deep in the end zone. A game of thousand emotions, and not one of them is romantic, never mind being a romantic lesbian sport. It’s hard to even explain why I wrote the book, Romancing the Kicker, connecting romance and football.

And then I thought, just the other week, my wife and I cuddled up on the couch to watch our then undefeated Los Angeles Rams take down the Green Bay Packers.

The game was thrilling, a squeaker that came down to the wire. The afternoon consisted of homemade nachos, cold beer and a come-from-behind win that would make anyone’s heart pound.  But it was more than a game. A warmth rushed through me when Todd Gurley II put his team above his personal touchdown record when he actually looked for a tackle so he could run out the clock and end the game.

I couldn’t take my eyes off the screen, and afterwards, all we did was talk about the last few plays. Strangely, throwing ourselves into a Rams game felt a little like being in love. And honestly, now that I continue to think about it, during football season, we may be in a delightful, polyamorous relationship.

And you know what? I don’t think we are the only ones. Here is one of my favorite romantic football stories. 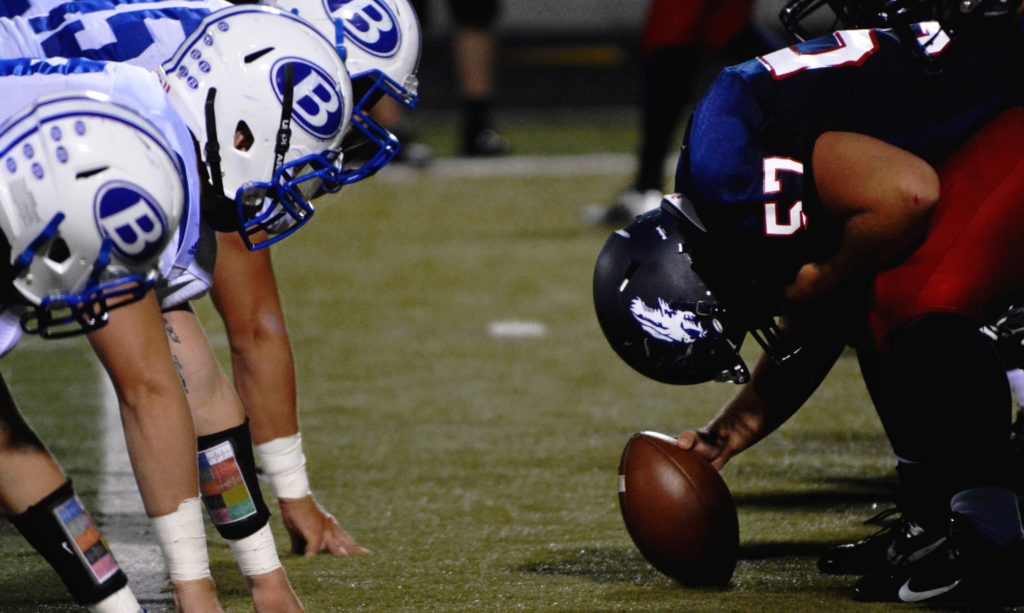 A game of love

Years ago, Jill, one of my best friends, had just started dating Cori, a super cool woman. Cori was all Jill could talk about, but they had met at work where they were both teachers, and their courtship, surrounded by the whole school, had been a little awkward.

“She sounds really great. Can’t you just fast-forward to the easy part where you’ve been together for a while?” I asked Jill one Saturday afternoon at our local Coffee Bean.
“I wish. It’s hard to get to know someone when nosy students and even nosier faculty are watching our every move.” She shrugged. “So, I asked her over tomorrow for lunch, and she’s coming.”
“That’s great.” Or so I thought, until Jill bit her lip in concern. “No?”
“Well, stupidly, I invited her at the exact time the game’s on.”
“Oh.” That was a real problem. At that moment, we were both huge San Francisco 49er fans, what with Los Angeles having no pro-team, and Jill liked to watch the games live.
“You could tape it.” I offered, but Jill just sighed.
“Football is the only thing that can come between me and true love,” she said.

What a difference a day makes

Fast forward twenty-four hours. Jill later told me things had gone horribly wrong. The chicken for the salad hadn’t cooked through and the home-made Caesar dressing tasted too much of garlic. Jill stood in the middle of the kitchen spinning around not knowing which mistake to address first.
The clock over the stove flashed one p.m. The game had started, and Cori’s tap on the front door was right on time. Jill quickly guided her into the den. “Make yourself at home.” She waved to some brie and crackers on the coffee table. “I just need to finish up in the kitchen.”

It took longer than she hoped, and when she finally rounded the corner back into the room, Cori was standing in the middle of the den, eyes glued to the TV on one wall.  “I hope you don’t mind,” she said, “but I turned on the 49er’s game.”
Jill stopped dead in her tracks, and her gaze locked into Cori’s. She swore the words came out before they registered in her head. “I’m going to marry you.”

And guess what? They did. Almost a year later, on a Saturday, so they could fly up to San Francisco the next day to begin their honeymoon with a 49ers game at Levi’s Stadium. I know what you’re thinking, but, yes, the story’s true.

There are probably lots more stories of women who met their soul mates through the game. With so much passion on the field, the game has to inspire passion off the field as well.

Let us know in the comments below your football romance stories!

Romancing the Kicker by Catherine Lane will be available from the Ylva shop from Decmeber 5th.