Top 10 Films Where No Lesbians Die 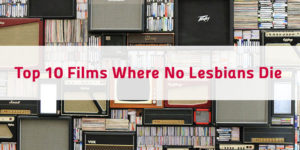 Well, we’ve all been there. Romantic night, popcorn in hand, hot date snuggled up to you on your sofa. You’ve just hit Netflix or the DVD store for some hot new queer cinematic masterpiece you’ve heard is adored by critics.

You know the one. It’s from that fancy French director who won every award going in Cannes, and who thanked his muse, a 90-year-old model who quotes Voltaire when asked for her drinks order.

By about the seventieth minute, you really, really regret that you didn’t read the queer press reviews on this pile of noxious noir as well as the mainstream ones. Because, oh look, another dead lesbian, killer dyke, or psychotic gay. They’re beautifully ruining your evening in a river of blood, poetic wails, teary eulogies, and arty music, complete with billowing silk curtains.

Well, you’ve probably already had it up to your hind teeth with the “bury your gays” trope, after surviving all those beautiful dead lesbians on Buffy, The 100, Pretty Little Liars, Last Tango in Halifax, The L Word, Wentworth, and beyond. You’re also likely just as exhausted from all those campaigns and blogs explaining why they have got to stop doing this over and over to our protagonists, not that most of Hollywood seems to even get a clue.

What you do know, when you glance at your hot date, whose adorable nose is now running and affixed to a tissue, and whose eyes are red and big and sad, is that you’ll be getting no nookie tonight. And it’s that awful movie’s fault.

Well, fear not lovers of beautiful, lesbilicious, still-alive-at-the-end queer cinema (you see how low that bar is set?).

In honor of February being romance month at Ylva Publishing, I have dug through the vaults to list – in no particular order – my favorite top-ten films where all lesbians are both sane and have pulses by the time the end credits roll.

Feel free to drop any of your own favorites not listed here in a comment at the end.

Official blurb: Two attractive young lesbians meet in Vancouver, develop a passionate romance, and move in together. Meanwhile, one woman’s well-meaning but naive mother gets divorced and decides to join the household.

Lee’s gay blurb: A lesbian’s fab sex life with her new girl gets a crimp when her mother moves in. Awkward.

Why watch: Remember those earnest lesbian flicks where you wait an hour before the first kiss and another hour before there’s a furtive clothing fumble? This isn’t one of those. There’s joyful, wonderful, affirming sex in the opening of this Christina Cox star vehicle, some relatable dealing-with-mom issues in the middle, and a few friend side stories that are terrific. Contains less navel gazing and more fun than most queer flicks. Refreshing.

Watch with: All your friends. Play a drinking game every time an enraged Frances complains about Customs seizing her queer books.

Official blurb: A woman on the precipice of divorce becomes drawn to a ranch owner’s daughter.

Lee’s gay blurb: An uptight, always-in-control professor waiting out her divorce in Reno in 1959 is seduced by a sexy casino worker.

Why watch: The ice queen melteth …. plus skirt suits. This is one of the most seminal lesbian films in existence, with a blazing hot sex scene to match the dusty desert backdrop. There are fears, fights, and fabulous, fabulous chemistry between its smoking age-gap leads. A happy ending for lesbians, even in 1985, was rarer than gold dust. THE classic lesflick­­­.

Bonus points: A jaded Denise Crosby (Tasha Yar from Star Trek: Next Generation) among the womenfolk, in one of her first roles.

Watch with: Your soulmate and the phone off the hook.

IMAGINE ME AND YOU (2005) Comedy/drama romance

Official blurb: A newlywed bride becomes infatuated with another woman, who questions her sexual orientation, promoting a stir among the bride’s family and friends.

Why watch: On paper this sounds trite, dreadful, and a remorseless cheaters’ playground. On screen it’s surprisingly delightful, helped by Lena Headey in her most laid-back, likable role as the florist who catches the eye of girl-next-door, Piper Perabo. Piper’s character, Rachel, has “settled”, marrying her best friend and deciding maybe this is just how love is. That’s until the proverbial queer toaster oven lands on her head and Rachel finally grasps why she never felt any hetero butterflies. The marriage side is handled with great sensitivity. We feel the nice-guy husband’s pain, too, amid Rachel’s guilt, conflict, and growing love. Contains a liberal dusting of humor, too.

Bonus points: Anthony Head (Giles in Buffy) having a comic cameo or two as Rachel’s drunk father. And No. 9 being a wanker. You’ll hear that in your head for months.

Watch with: Your parental units. They’ll come away understanding why that high school boyfriend never clicked with you and why you and your housemate seem so very close.

Official blurb: Plaid-skirted schoolgirls are groomed by a secret government agency to become the newest members of the elite national-defense group, D.E.B.S.

Lee’s gay blurb: Sexy lesbian supervillain falls for sweet secret agent and stages a kidnapping that is more fun for the willing “victim” than her friends searching for her.

Why watch: This gloriously funny and silly spoof will either be a big hit or a wide miss for viewers. Most of the critics fixated on the girls’ tiny miniskirts and big guns, and didn’t seem to grasp it was all a huge send up of the spy genre, complete with a bad-girl with an atrocious Russian accent. This is PG-rated, parent friendly, with great rewatchability for young and old.

Bonus points: Holland Taylor’s cameo. She should be mandatory in every gay film.

Watch with: Popcorn and your bestest BFFs.

Official blurb: A Chinese-American lesbian and her traditionalist mother are reluctant to go public with secret loves that clash against cultural expectations.

Lee’s gay blurb: A sweet Asian lesbian romance about a cute doctor, the dancer she wants to date, and cultural expectations.

Why watch: The feel-good factor is through the roof on this one. What’s excellent is the family issues aren’t glossed over but are picked through, dealt with, and then accepted. What makes it even better is having a humorous acting tour de force in the form of veteran actress Joan Chen, who plays an eccentric, unwed pregnant mother.

Watch with: Any romance lover, straight or gay, plus gooey-centred chocolates.

Lee’s gay blurb: Sexy grrl lovers decide to steal from a mobster, who also happens to be the boyfriend of one of the women. He may have a slight problem with that.

Why watch: This Wachowski siblings’ mainstream-marketed flick is slick, sexy, with great pace and tension that keeps ratcheting up. The building seduction scenes between Jennifer Tilly and Gina Gershon are a master class in how to steam up screens. The film comes with a gross-out warning due to torture, but it’s nothing the fast-forward button can’t fix. In sum: a ripper thriller.

Bonus points: Despite being a mob story, the women aren’t bumped off, nor are they disposable or dispensable to the plot.

Watch with: Your thriller-loving lesbi-leaning friends. (Avoid serving meat or any finger-shaped food. For reasons.)

BUT I’M A CHEERLEADER (1999) Comedy/drama romance

Official blurb: A naive teenager is sent to rehab camp when her straitlaced parents and friends suspect her of being a lesbian.

Lee’s gay blurb: Lesbians in conversion therapy mock the hell out of it and figure out love, life, and themselves.

Why watch: I know, I know, fun and hijinks involving conversion therapy? Well, this is heavily in satire/surrealism territory so it’s not as bad as it sounds. Plus the cast is incredible, including Clea Duvall and Michelle Williams. Besides, if anything deserves a mockery, it’s this invidious topic. Straight critics generally panned the movie as it made many uncomfortable. So an added tick for that.

Bonus points: Brave topic, and a fine line in getting it right.

Watch with: A few friends, funky cocktails, and a good mood.

Why watch: This is an ethereal film, high art, containing longing, secret gazes, dropped gloves, green palettes, and ultra-cool lesbians. It’s Important Cinema™. I find it a little too removed, personally, given I like my ice queens to melt a lot more than Cate Blanchett’s character does while road-tripping with Rooney Mara. But what is valuable about Carol is it is based on The Price of Salt, a classic Patricia Highsmith book from 1952 that broke the mould by giving lesbians a happy ending. Now that’s definitely worth the price of admission. Well, that and Cate Blanchett’s stunning cheek bones.

Official blurb: Annabelle is the wise-beyond-her-years newcomer to an exclusive Catholic girls’ school. Sparks fly between her and her teacher, Simone.

Lee’s gay blurb: Lesbian student pursues her repressed hot teacher at Catholic high school and it ends about as well as you’d expect.

Why watch: This movie falls in the category of liking a thing even though you know you probably shouldn’t. In that sense this is so bad. But still. Sigh. The thing is… teach is hot. Her student, Annabelle, looks and acts much older than she is. And she’s the pursuer in this romantic tryst or it’d be a creepy, predatory power play like Bloomington (don’t start me). The sex scene here is lovely. The chemistry is great. And if you like naughty, out-of-bounds stories, this is probably the best of them. Also… it’s so bad.

Bonus points: Ilene Graff as the stern (possibly closeted) Mother Immaculata does a phenomenal job at ramping up the stakes.

Watch with: Lots of red wine and a lapsed Catholic. They give the best running commentaries.

Official blurb: An accident creates guilt, fear, and suspicion that tear at the relationship between two Australian women.

Lee’s gay blurb: A lonely older woman is attracted to her vibrant maid and does everything she can to make her want to stay at her isolated farming property.

Why watch: Okay, it’s cheating to call this a gay film, but it so deserves to be seen. Beneath this arty Australian movie lies an aching, beautiful tale of unrequited lady love. While it’s marketed to the mainstream, nothing that happens in this tense, award-winning thriller could occur if not for virginal, late-forty-something Hester falling for her spirited young maid. Hester (a young Pamela Rabe of Wentworth fame) will do almost anything to keep her maid (Miranda Otto) at her side – and the eccentric young woman seems only too aware of her own sexual power. The film has a gripping, taut plot involving a stranger, and is set on an isolated rural farm. Brilliant and evocative, it’s the sort of film you’ll think about for years.

Watch with: Your angst-loving friends, straight and gay, who appreciate it when drama midi-chlorians are set to high. Bring chocolate in bulk.