Lee Winter’s Requiem for Immortals out in German 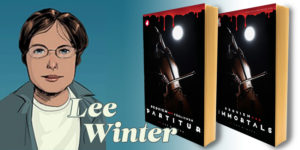 Ylva is releasing award-winning novelist Lee Winter’s Requiem for Immortals in German this month, as Requiem mit tödlicher Partitur. We’d love to share the interview she did for German lesfic lovers on how she came up with her gritty, gripping, lesbian crime noir/thriller.

With Requiem for Immortal’s short-story sequel, Love Is Not Nothing, recently out for English readers, there’s no better time to discover why the powerful story of an underworld Australian assassin and her mousy target won a Goldie Award and was a Lambda finalist.

Could you tell us in a few sentences what Requiem for Immortals is all about?

What happens when a top Australian cellist, who has a secret identity as an assassin, and who arrogantly thinks she’s untouchable, is asked to kill an innocent? My book is about the unravelling of her power, slowly, piece by piece, as she realises not only is she not untouchable, she is vulnerable in the face of emotions.

Although the novel follows the familiar theme of “assassin is falling for her victim, what prevents her from following through with the job”, this novel is more than just a thriller. Neither is it a romance. But it is about emotions. It’s also about power and control. How would you describe Requiem for Immortals—what makes it special?

It is the evolution and transformation of an “immortal” assassin into a mere mortal like everyone else. She starts out so confident, so assured and strong, so convinced she doesn’t need pathetic people or love or anything else. She lives for power and control. But her unravelling is what makes it special. Requiem never thought her walls could be breached and I love how terrified and in denial she becomes as she realizes her foundations are slowly starting to crack in the face of her emotions leaking to the surface.

How did you come up with the idea for the book?

There is an actress on the Australian prison drama, Wentworth, called Pamela Rabe, who was playing the Machiavellian governor. I saw a photo of her in a black jacket, leaning elegantly against a wall, staring off to one side, her face was in profile. Her expression was challenging, mocking yet ice cold, as if she was used to toying with us flawed, human fools. Her six-foot height, and long, straight, jet-black hair made her even more imposing. The photo riveted me. I thought, “Oh my God, she is capable of murder. She wouldn’t even blink. And no one would ever suspect!”

In truth, I’d met Pamela a few times for work, and she’s lovely and doesn’t have a lethal bone in her body! But the moment I saw that chilling, condescending, confident look, my mind exploded with possibilities. I imagined an assassin who wore her face. My mind filled in the blanks and raised possibilities: What did my assassin do and why? Requiem was born.

Natalya Tsvetnenko aka Requiem, is an assassin, not really a character with whom the reader would immediately identify with, especially because she is so cold and looks down on others and their flaws. What sparked the idea to make one of the main characters an assassin?

I know that no one should love an assassin and I worried a lot that they wouldn’t. But I thought – what if I slowly peeled away the layers and showed she’s not some sociopath, but she’d been groomed and trained by people that she trusted to bury her emotions until she evolved into the arrogant killer we first meet. I hoped readers might come to understand and slowly fall in love with the human facets of her, just as I did. They might discover her vulnerability and know that while she kills, it’s only the worst of the worst whose lives she ends, and that’s definitely not all she is.

They are so perfectly balanced for each other. Requiem is on guard for other assassins, for people just like her. Alison is so innocent that it never occured to Requiem she might be vulnerable to someone like that. Alison, just by being Alison, is a person who could make even an assassin let down her guard. And from a family background and personality point of view, they share a lot of similarities not at first obvious. They really do understand each other in ways that sound unlikely the first time we meet them.

As the title hints at, classical music is pretty important for this book. Does it have a key role in your live as well? And did it inspire you while writing this novel?

I am pretty hopeless with music. I am one of the people Natalya/Requiem rails against in my book, who hears pretty notes and finds music enjoyable, especially classical music, but I don’t respond to it on a primal, all-consuming level of passion the way she does. Music is her emotional outlet given she denies herself her feelings in every other area of her life. She doesn’t even allow herself to feel anything during sex; that’s just an amusing power play for her.
I appreciate music a lot more since I “met” Requiem and I had her favorite Arvo Pärt piece playing while I wrote it. In many ways she taught me to feel it on a much deeper level.

Of all possible kind of musicians, why is Natalya, aka Requiem, a cellist, not a violinist or a flutist?

I wanted an instrument that was large, brooding, imposing, and powerful, not easily dismissed. Just like Requiem.

How long did it take to write this novel?

Four months. I wrote it in a fever dream. It consumed my every waking hour. I dreamed of her. It felt like she whispered her story into my ear and I wrote it down furiously. Never before or since have I experienced writing in that way. It felt like a personal and astonishing gift of a story that was handed to me. For months after I finished, I still heard her whisper to me at night! I often joke that I’m Requiem’s biographer.

Did you plot out the entire book before you started writing, or did you explore where the story would take you?

I saw the whole story in my head like a movie. I knew the opening and closing lines (which are very similar) before I wrote the first word. The big problem I had was point of view. At one point I had an entire book written from Requiem’s POV. Than I had one written from Alison’s. Finally I merged them and that’s what the final product is. Just like the characters, the POVs really needed each other to feel whole.

The plotting is incredible and leaves the reader constantly surprised, especially at the end. It leaves room to develop the storyline about Natalya and Alison further. Can we expect some kind of sequel?

There is a new 10,000 word short-story sequel out called Love Is Not Nothing. It tells of a single day in Natalya‘s life two years after the end of the book. It answers the question of does Requiem still hunt? How does she feel about Alison now?

As to whether I would write another, I’m not sure. I have an idea for another novel but Requiem is such an emotionally draining character to write, I don’t think I’d touch her for at least a year or so. I guess it depends on whether she starts whispering to me again!

About the Author : Daniela