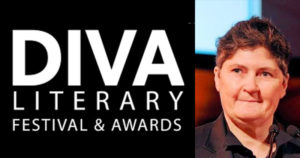 When Linda Riley, publisher of iconic lesbian magazine DIVA, decides to put on a new British literary festival, there’s little doubt she can pull it off. Not just pull it off, but lure in the likes of queer actress and all-round legend Heather Peace as well as internationally best-selling author Val McDermid.

Ylva leapt at the opportunity to have a chat about the state of lesbian and bisexual acceptance, queer fiction, and the DIVA Literary Festival, which includes the DIVA Literary Awards. Ylva, sponsor of the LBT Fiction Award, will be out in force on author panels from November 4-5. Tickets are still available here.

So who is the woman behind the most lesbilicious new festival around?

Linda Riley’s CV is a fat, fabulous, and many rainbow-colored thing.  Her career includes being a former adviser to the British Labour Party on diversity issues, a former Stonewall award winner and founder of the Alternative Parenting Show, the British LGBT Awards, and the Diversity Careers Show. When she’s not busy changing the world, she publishes iconic lesbian title DIVA magazine and global news site Out News Global.

Linda, what inspired you to put on the Diva Literary Festival?

Since DIVA was launched in 1994, the magazine has always championed lesbian arts and culture. While there are more lesbians and bisexual women in the public sphere than ever before – in politics, media, sport, and more – we mustn’t forget that the voices of our community have been marginalized for centuries. Yes, things are getting better, certainly in the UK, but by no means do we have a level playing field across the cultural landscape. Lesbian literature, whether by lesbians or about lesbians, is often viewed through an over-sexualized lens, which only serves to diminish the important stories we have to tell.

What’s more, we can’t take progress for granted. We live in a world of Trump in the US, Brexit in Britain, and the alarming rise of the far right on mainland Europe, towing in their wake a new wave of misogyny, homophobia, and racism. We cannot afford to be complacent, and DIVA has a duty to play its part in ensuring that our voices continue to be heard loudly and proudly.

But aside from that, the real inspiration is the amazing talent within our community. One look at the festival program gives you an insight into the breadth and depth of the artistic talent we’ve assembled, and it’s brilliant that the DIVA community can come together and celebrate their contribution not only to the LGBT+ world, but more generally to the cultural mainstream.

The Festival will be a success if…

What do you think is the direction lesbian fiction is going? Its future and trends?

Hard to say, but I hope and expect to see lesbian authors break out of the LGBT+ bubble to the extent that their work becomes part of the mainstream. A great story, well-drawn characters, and a compelling theme are part of what defines a good work of fiction, and the fact that a book is written by a lesbian with, perhaps, lesbian characters and LGBT-inflected plot lines, shouldn’t necessarily be worthy of comment. Of course, many lesbian and bisexual authors are already hugely successful within the mainstream market, and long may it continue.

That said, I know that many LGBT writers like to write specifically for their own community and, in many ways, that’s just as important. We need to keep telling those coming out stories, both to reassure and inspire the generations that come after us. And we need to continue to write songs and poetry that speak to the soul of women who, because of their sexuality, share unique life experiences which only people like them can fully appreciate.

Do you ever have fangirl moments yourself over authors or lesbian celebrities you meet in your job? If so, who, and what happened?

No particular funny stories, but I really do have to pinch myself sometimes when I think about all the amazing people I’ve met through my work. In many ways, my life is one long fangirl moment!

What is the last book you read? Why did you choose it?

I’m not just saying this because she’s appearing at the festival, but the last book I read was Out of Bounds by Val McDermid. I’ve read loads of Val’s books over the years – tight plots that keep you guessing, beautifully developed characters, and a beautiful way with the English language…you can’t go far wrong.

Linda Riley is publisher of Europe’s leading magazine for lesbians and bi women, DIVA, she is founder of the DIVA Literary Festival, co-founder of the British LGBT Awards and a GLAAD board member. You can find Linda on Twitter.