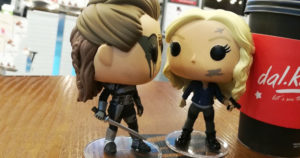 Your fandom ship never sailed. Everyone was treated terribly from beginning to end. Your favorite character died in the most tragic way. But in the past few years, some queer fandoms started to make clear that they would no longer accept the characters who represent their identities to be buried for shock value.

That uproar resulted in countless charity programs to benefit queer youth, unity of the LGBT fans and wide media attention, for example at lgbtfansdeservebetter.com. Last year when Commander Lexa died in The 100, Ylva was one of the many platforms covering the issue of television killing our queer heroines.

But when the dust settles, where does that leave fans of their shows?

When their fandoms are done, there is one expression that keeps them together: We still have fanfiction.

With queer fanfiction, you get not only the happy ending you were deprived of, but every happy outcome imaginable. Deaths never happened. Cancellation will never happen, because after the show ends, the characters belong to the community.

For TV shows it might be a huge thing if they manage to fully surprise the audience with their twists. But as a fan, it is reassuring to be able to look at plot tags up front and to decide to not touch that “major character death” fic with a ten-foot pole. If you want it, the worst villain your ship has to face in a story can be miscommunication.

And yes, after a while it feels like you’ve read everything.

Every queer fanfiction, ever

You know how that fanfic goes: They meet in college where they are most likely roommates. Maybe Person A is a nurse and Person B a police officer. They might fall in love while pretending to already be in love in front of others. Then there are coffee dates, road trips, and replays of original scenes that should have gone differently.

It often takes them months to have their first kiss. Sometimes that happens in the very first sentence and it grows more heated with every word. They might even get married or Person A ends up as president of the country.

You start a story and already know every possible path and outcome. But you still choose to wait and see if being a fake couple will really make them wish to be an actual couple, while a voice in your head calls you a moron.

But why is that? Why do we pick the same tropes for the same couple over and over again? Why do we even decide to read a story in which A and B have been taken out of their original fictional universe and instead of fighting a war, they meet in a coffee shop – when we could just pick a novel about two women falling in love in a coffee shop?

Because we are invested in those characters emotionally. And because for people who love fiction, fanfiction holds incredible power. Many people also first get into fanfiction because it gives us the healthy queer relationships the wider media still doesn’t offer.

An informal census in 2013 found that only 38 percent of AO3 users identified as heterosexual, and more people identified as genderqueer than as male.

Male-slash fanfiction has always been the monopoly. But the women-loving side is not to be underrated, especially when it comes to content with strong female leads, which fans are always ready to ship, and to fall in love with their loves.

There are more Supergirl fics involving the hero with different female characters than with her actual male love interests.

Emma and Regina on Once Upon A Time together leave their respective boyfriends behind by more than a thousand Swan Queen stories on AO3.

Xena ended years ago and still gets new fanfiction daily, pairing the Warrior Princess with her bard.

Clarke and Lexa get content for not only one, but two different ships: The post-apocalyptic leader duo Clexa, and the zombie-fighting, fan-created power couple, Lexark.

So, why so much explanation about the meaning of fanfiction?

Because there is another advantage of fan-made content to consider.

The fanfiction community is an organism that’s wide awake

Even if we talk a lot about coffee and kissing in fanfiction, it is a phenomenon far more complex than that. The best pieces can be just as constructive and insightful as any work of literature. Lots of authors continuously develop their writing skills further and, at the same time, build up a strong and loyal fan base by writing fanfiction.

Likes. Comments. Praise. Critique. Content input. Questions. Even the occasional anger towards your plot choices. Every reaction helps us get a sense of what people enjoy to read. And every reaction shows how much fanfiction readers care.

Jenny Spanier is a former intern of Ylva Publishing. She has a Bachelor of Arts in Comparative Literature and is currently working on her Master’s degree at a German university. She cares too much about fiction and spends too much time on her tumblr badasscommanderleksa.