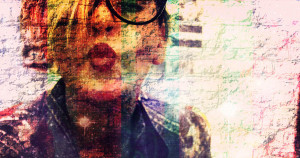 I recently led a panel discussing this subject. We looked at things such as the physical beauty and body shape of characters, the roles and storylines in erotica, and who is writing lesbian erotica. The latter is a hot topic which I’ve discussed before in the blog, Hot, Het and Hated—How Lesbian Erotica Has Been Hijacked.

Race—It’s Mighty White Out There

The vast majority of f/f erotica features white characters. And the vast majority of f/f erotica (or, at least, the ones written by women—and that’s a whole other subject) is written by white women. Yet any glance at the statistics covering racial diversity in the lesbian/bi community will show that our community is not remotely 100 percent white.

The only women having sex, if you believe f/f erotica, are the under thirties. No one over that age apparently gets to enjoy any fun or kinky stuff. As a woman of a certain age with a nicely active sex life thank you very much, this offends me deeply. Ageism is as rife as sexism in everyday life, and to see that ageism so apparent in lesbian/bi erotica is disappointing—again, the LGBT community (and its readership) is not all under thirty, so where are the sexy stories representing that?

I know of a few, but as with stories featuring racial diversity, it takes a lot of trawling through blurbs on Amazon to track them down, or seeing the odd recommendation out on social media. And on social media I see constant complaints from the women around my age and above who are let down by not seeing themselves represented in the stories they buy.

Let’s Get Physical—As Long As You Look Perfect

Every woman in lesfic erotica having sex is gorgeous. They’re super slim, and either beautifully femme with long hair, toned arms, and amazing eyes, or perfectly butch with just the right amount of muscles, at least 5 feet 10 inches tall, and devastatingly handsome. Because, duh, that’s just described every woman in the LGBT community, right?

Of course not! Where are the short women? The women larger than a size zero? The women who usually wear jeans and a T-shirt but wouldn’t call themselves butch? The women whose noses might be considered too big, or who wear glasses, or who have a disability?

Yes, I get it—a lot of erotica is written as fantasy material, and readers often want to disappear into a make-believe world where everything is perfect. But not all readers want that—some want a fantasy that involves someone just like them, a character they can really relate to because then the fantasy contains a much deeper connection and everlasting effect.

Much of the f/f erotica I’ve read features one of two storylines: (a) the strong butch dominating the soft femme or (b) the straight woman being “converted” to lesbianism in one encounter with a stranger. And notice she jumps directly from straight to lesbian—apparently being bi isn’t an option.

A.L. Brooks currently resides in London, although over the years she has lived in places as far afield as Aberdeen and Australia. She has just published her third book Miles Apart with Ylva.