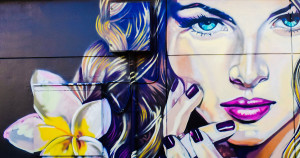 I’ve been out as a lesbian for a long time. I don’t like to think that it’s possible I’ve been out for as long as I have, but there’s only one alternative to aging, and I’m not ready to cash that ticket yet, so I’ll be grateful for the number of years behind me, rather than lamenting their passing.

That said, I’m writing about a topic I’m surprised is still a topic…

I was raised by a self-identified femme lesbian. Long nails, high heels, the whole shebang. So when I came out, I had no problem taking on my own femme identity. That’s who I’d always been, so why change it when I came out?

Turns out, it wasn’t that simple.

When Femme Identity Means No Entry

I was turned away from gay bars, told I didn’t belong there. At parties, I was stared at, laughed at, ignored. I was told I was clearly a straight woman messing around, and I should just go back to men. The LGBTQ+ center on my university campus ignored me, and then told me I was in the wrong place. My long hair and dresses sent me to the periphery, and if I hadn’t had such a great example in my own mom, I may have given in and attempted to change my visual identity (only external change, mind you. My insides were pure femme).

A few decades later, I thought all that had changed. Perhaps with age you just accept who you are, and don’t give a toss what other people think. And in Manchester, I see girls with long hair (and backward baseball caps—apparently that’s a thing) and I envy that. But I look around and don’t see the girls in heels, the girls in make-up, the powerful girls who own that they like their girlie sides.

It makes me sad, just as it makes me sad to see the self-identified young butch girls who feel like they don’t have a place in the community anymore. Middle ground seems to have swallowed up an awful lot of queer turf, which means there are a lot of queer folk still feeling like they’re on the outside, even in their own communities.

Is it truly so difficult to accept that we come in every shape, every size, every gender identity? We use the rainbow flag as our symbol, to show we encompass everyone. Being excluded by your own community when you’re already facing a tough world outside it, is something no one should have to deal with. When we embrace one another as we are—all of us, simply as we are—we will become a richer, more welcoming community. And what a great way to show the world how to do it.

Fixing It In Fiction

Perhaps that’s why I write the characters I do. I like the butch/boi-ish and femme combinations. I like seeing my world represented on the page, and if there are others out there who feel on the periphery, I hope they’ll see a bit of themselves in my books, and know they’re appreciated and definitely not alone.

Brey Willows is a development editor, a writing instructor, and runs a small press with her partner and fellow author specializing in printing the stories from marginalized communities. Brey lives in the middle of England and is the author of more than twenty short stories and the Afterlife, Inc. trilogy.