Why Can’t We All Be Heroes? 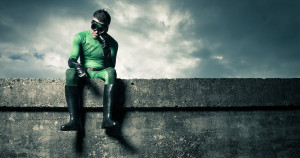 What is a hero? These days we call everyone a hero, from a child calling 911 to a sporting star doing his multimillion-dollar job. But what are heroes? Really?

It’s Wednesday, March 26, 2014. My heart still pounds when I think of it. It’s just before eight in the morning at my usual train station. An ordinary-looking man in his forties in a fluorescent orange “high vis” vest, is standing on the wrong side of the line at the edge of the platform. This draws my eye.

He starts pacing. He turns, catches my eye, and smiles. Well, his lips tick upwards; his eyes are stormy though. I’m ten feet away. He’s not safe.

“The next train is express. Please stand clear of the platform edge.” The announcement reverberates from the creaky old speakers. It’s impossible to miss.

The man stops pacing. Finally, I think. He’s going to step back. Instead, he inches a little more beyond the safety line.

A horn sounds and the express comes flying into the far bend. All eyes have turned to look at it. Except mine. I’m watching the man.

He drops to sit on the edge of the platform. Legs dangling down. Work boots drumming against the low wall. If I shuffle forward a bit, stretch out, way out, maybe I can reach him. Grab a fistful of vest; haul his ass back on the other side of the line with seconds to spare. Maybe I should? That’s if he’s not playing some silly game.

What if it’s a prank?

I wish my mouth would form words. Time is all wonky. Outside my body, it’s flashing by. So fast. Colors, sounds, they all blur. Inside, my thoughts are slowing down to a strange crawl. It’s hard to think.

His bright orange back is to me. What the hell is he doing? Playing chicken?

The train driver’s seen him now. He’s throwing on his brakes. The screech is deafening. His horn has become one drawn-out wail—a pained, uninterrupted shriek. The sound is so long, monotonous, and ugly that everyone for miles around has to feel a chill up their spines.

The regulars in their business suits, and kids from the adjacent boys’ school waiting to meet their friends, have all turned to find the source of the driver’s panic.

They see the man.

Don’t look, I want to tell the confused boys. My mouth is so dry. No words come out.

It’s happening. It’s actually bloody happening, my brain starts to scream at me. Stop him! I take a step forward. Eight feet away. Why are my legs wobbly and weird? Six feet. My arm should reach out. Why isn’t it? It’s like lead at my side. Five feet.

Time suddenly flings itself forward like a sling-shot, becoming a blur.

He moves fast. In a flash of orange, the man drops suddenly to the railway line. He jogs four steps and pauses in the middle of the track. The train will hit in half a second if he doesn’t move. There’s still time for him to move.

He turns back to look at me—me, the closest person. He holds the look. He has the sickest, gleeful smile on his face.

That bastard. He wants me as his witness. Our gazes stay connected in that frozen, cruel split second.

I will remember the sound for as long as I live. The precise weight of it.

For months later, that thud lingered with me. I also came to despise the sight of high-vis vests, and avoided the sound of loud train horns. It wasn’t the only thing that lingered. With it came the knowledge that I am no hero.

Heroes are exceptional. They don’t freeze or hesitate; they have a presence of mind to act. They utilize their adrenaline and can do things beyond what their instincts are screaming at them.

In 2007, a man fell on a New York subway train track, having a seizure. His arms were flailing. He was in no condition to get back up again. A train was hurtling towards him. Autrey, 50, there with his two little girls, saw it, flung himself onto the tracks, lying down on top of the man, pinning his arms and legs to his side between the rails. He hoped the train had clearance enough to pass over the top of them both safely.

It did. By half an inch. See him for yourself. www.youtube.com/watch?v=e9JcX2X7XnM

I wish I knew how people like Autrey exist. They number few, but their mere existence is awe-inspiring. Autrey makes me proud of humanity.

Superheroes do it better

It’s little wonder that we have a fascination with heroes. They do what regular people, people who aren’t like Autrey, wish we had the courage and strength to do. They give us comfort, make us feel safe. It’s no surprise, therefore, humanity also has a fascination with superheroes, who not only do what we dream we could, but also do it a hundred times better, faster, stronger, and with a more photogenic smile.

It’s interesting watching the evolution of superheroes in entertainment over recent decades. They tend to be more tragically human these days, more easy for us to see aspects of ourselves in and relate to. They have failings and fears, and yet they slide on the tights anyway and bravely go out and face danger.

This phenomenon of the more-human superhero is what drew me to write about heroes for Ylva’s Superheroine Collection. In the cracks and foibles of our Lycra-clad gods and goddesses, we find people far more interesting than those cookie-cutter pin-ups to perfection of days gone by.

Nowadays they are increasingly like us—no longer perfect and also no longer automatically always white, male, or straight. They are the best of us and, at times, the worst of us. That just makes them so much more interesting.

Which brings me back to my original question: What is a hero?

What is a hero? Not me. I have, with time and reluctance, come to a place of peace and accept that this is a fact. We can’t all be heroes.

And that’s why I appreciate them all the more.