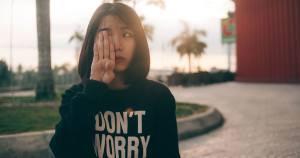 Humor is a subjective thing. So much so, that when I was a junior reporter, our cadet trainer warned us never to inject humor in stories. Not just, “Hey, maybe not till you’re older and more experienced”. Nope, like a man scarred by battles only he could see, Geoffrey growled: “NEVER TRY TO BE FUNNY!”

I took him at his word. I didn’t feel particularly funny anyway. Then at age nineteen I was sent to the Melbourne interstate news bureau where I was assigned the midnight shift. I worked out of an affiliated newspaper office and my job was to pass on all that paper’s news stories each night to its sister newspapers around Australia. That was it: I was an on-passer of news on the graveyard shift.

I wasn’t the only one in this news bureau—there were five of us from all over Australia, but the others got to work day shift and actually write their own stories. I waved at them in passing each night. I’m not sure they even knew my name.

The worst part about the job was that the newspaper we worked out of didn’t respect the bureau or us. We were an irritation, always bobbing up, asking what they were working on. So they made an emergency exit area, near the roof, our office. Not even remotely legal, but hey, it was the late ’80s.

Access to this office involved climbing steep, external, fire-escape stairs that were coated with pigeon poo. When it rained the pigeon poo got mighty slippery. It was only by luck that none of us slipped three storys to our pathetic, pigeon-poo-related deaths.

So there I sat each night—young, homesick, miserable—the only person working in this rafters office. About the only thing that gave me a smile was a national TV program called Tonight Live With Steve Vizard.

Steve was a comedian with his own show who shamelessly ripped off The David Letterman Show. The sets, format and live band were identical. We didn’t know it because Australia didn’t air Letterman’s show in back then.

Steve finished his wildly popular show each night with a hilarious top-ten list. For example, he might offer the Top Ten Things You Should Never Say to Your Boss.

The Fax of Life

Part of my job was to fax the front page from the Melbourne paper I was based at to Steve’s show each night, so he could hold it up and reveal what was going to be in the news the next day. On one particular night, boredom or madness seized me, and I decided to not just send through the front page, but add my own top ten list to the fax.

As I scribbled up my list, I had the cadet trainer’s voice screaming in my ear to “NEVER TRY TO BE FUNNY”. I also knew that my family never laughed at my jokes. Probably because I couldn’t physically tell a joke given that I was shyer than a day-old kitten. So obviously I thought, yes, by all means, I should anonymously share my hidden hilarity with Australia’s funniest man.

Ten of the Best

Steve did his regular top-ten list and then suddenly produced my list and began to read. My heart was pounding. Now, while I can’t tell a joke to save my life, Steve Vizard can. And under his vocal inflections, pauses and eyebrow lifts, he made my words leap from the page. He was hilarious.

I had no idea. Well okay, maybe I had a tiny inkling, but still. Everyone thinks they’re funny, but here was proof. The audience was in hysterics. Australia was laughing. I stared in amazement.

Don’t Listen to the Geoffreys

Everything changed that night. Oh, I was still shyer than a kitten. And I still on-passed stories at midnight. But after that I knew I had something. When I finished my interstate bureau assignment and went home, I began to explore that “something”. So much so that, years later, I actually became a weekly humor columnist.

Since then, humor infests everything I write, from acerbic one-liners to ridiculous, over-the-top dramatics. It’s a thread in every story. It’s challenging, but I wish more people would give it a go. You have to shut out the Geoffreys in your life, who shout that you should never try. That’s codswallop. Give it a whirl.

As for me, it’s been a fun, crazy ride. I have Steve Vizard—and David Letterman—and an entire national TV audience to thank for it.