Armchair Tourism—Researching and Exploring the World From Home 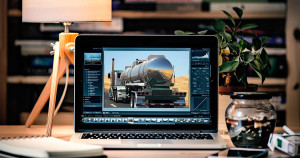 A few years ago, I visited a legal brothel in Mound House, Nevada. Moonlite BunnyRanch, six miles east of Carson City, is sixty years old now. I can tell you everything about the BunnyRanch—where it is, what it looks like, how the white, blocky buildings are cobbled together like a bizarre, stretched-out Lego building.

I can tell you how much it costs by the hour, and for what services rendered, and which ladies were on duty the week I stopped by. In fact, I can tell you everything about it…except what it actually feels and smells like to be inside. But that’s not surprising. Since I was never really there.

Around the same time, I drove from Los Angeles to Carson City. That took me five hours in a big rig, the largest truck I’ve been in. I could almost feel the heat beating down as we hit the I395 and rode along with a trucker and his faithful dash-cam.

I listened to his radio station (Country), laughed at his almost-jokes, told in a broad Nevadan accent, and tried not to fall asleep as we rolled on through deserted, vulture country. At least I didn’t have to worry about spilling the snacks or motion sickness, as I researched my debut novel.

The internet in general, and YouTube, in particular, has revolutionised book research for authors. It means a scribbler from Hobart, Edinburgh, Ohio, Durban or, in my case, Perth, Australia, can be anywhere at all without leaving their armchairs.

It’s incredible what we take for granted about how the modern world has opened up for us. The revolution of cameras in cars and in cockpits, on phones and laptops, means someone, somewhere, has uploaded the trip you want to take or plan to write about.

There was a time that, when an author or humble citizen of the world wanted to describe an exotic locale or adventure, they had only three choices. 1. Go there. 2. Research it extensively through travel guides and people who had been already. 3. Fake it entirely.

Now everyone can fake it. Everyone has the power to make people believe they’ve been to virtually any place on earth, and done every adventure thinkable, in the quest to provide a compelling story. But, here’s the question. If you’ve just spent five exhausting, completely immersive hours in a truck roaming across California and Nevada, is this still merely faking it? Or was your brain, or at least part of it, right there.

I suppose that’s a question for philosophers.

Of course, many readers, and more than a few authors, would probably suggest there is no substitute for actually being on the ground in whatever location they’re writing about. And this is true. But not all of us are blessed with big wallets, travel time, and sea/plane legs.

And then there are the people not able to leave their homelands at all, for whom this brave new world of online travel or research is an incredible, transformative experience.

I have a writer friend who has been “flying” with pilots around the world for months, watching from the cockpit as her planes land in distant cities. She knows all the terminology now and can tell on sight if the plane is on autopilot or not. She reports that the flights over Dubai are the most stunning you could ever find. The most brilliant runway, apparently, is Hong Kong’s vast new sea-landing strip. Also, Swiss-German pilots are the “funniest”, with accents they themselves refer to as “more of an affliction than an accent”.

But here’s the thing. My friend would never go near a plane in real life. She is physically unable to get out of bed and, even if she could, she has a terrible fear of flying. Yet, if she had the desire, she now has the knowledge (and writing ability) to create an incredible and evocative tale about flying, pilots and everything in between, all from her exploits on YouTube.

It’s astonishing when you think about it. A novel with perfect, precise detail about flying, constructed from someone unable to even walk to the letterbox, let alone board a plane.

I know there are many pitfalls, flaws and even terrors in our high-tech, always-connected, plugged-in world. But this astonishing, useful, sometimes beautiful, sometimes ridiculous, but always unexpected side effect of technology has changed so much for so many people.

And this is the magical upside of our modern world. Because now we can snap our fingers and say there’s no place like Rome.

Or Fjordland. Or Reykjavik. Or Frankfurt. Or Moonlite BunnyRanch.

Lee Winter is an award-winning veteran newspaper journalist who has lived in almost every Australian state, covering courts, crime, news, features and humour writing. Now a full-time author and part-time editor, Lee is also a 2015 Lambda Literary Award finalist and Golden Crown Literary Award winner. She is the author of The Red Files and Requiem for Immortals.