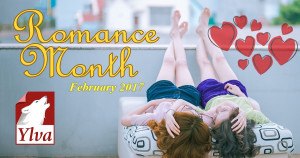 Tooling around social media the other day, I happened upon a comment that shot my eyebrows straight up into startled little apostrophes. An ardent romance fiction reader was complaining that she hated the conflict/hardship/tension trope that hits many a love-struck pair mid-book.

To her, the only good romance has to be completely conflict-free. As in: Girl meets girl, girl falls in love, The End. No niggles, fights, panic attacks, crises of conscience/faith/confidence, acts of god or scheming relatives to ruin a fine thing.

Her surprising preference on what makes a great romance made me wonder, with February being Ylva Romance Month, what is essential to lesfic readers who love the romance genre?

Just so we’re all on the same page, a romance, according to the Romance Writers of America, which runs the RITA Awards, “must have two basic elements: a central love story and an emotionally satisfying and optimistic ending.”

Therefore, unhappy endings, no matter how awesomely angsty they may be, à la Bridges of Madison County, and no matter how beautifully characters cry or die, are not romances. They are, however, love stories or possibly something else in a different sub-genre entirely, such as a thriller with a side of romance.

Keeping that in mind, I polled a popular Facebook lesbian readers’ group to find what women want in their lesbilicious romances. And the absolute, hands-down consensus, not just by a (short) fingernail, but by an entire tool belt, was sizzle. Lots of long looks, build-up, and enough sexual tension to fuel a nuclear reactor.

Let’s face it, no one should be too shocked by this given The Look™ is such a lesbian thing. Those secret, pointed, flirty, daring, longing, and aw-shucks shy looks? Such subtext is the backdrop to our love lives. So of course we feed off it like some exotic flesh-eating virus.

Is it any wonder that mainstream shows that are dosed up to high heavens with The Look™ (such as Rizzoli and Isles, S1 Once Upon a Time, Xena, and Supergirl) have a massive legion of rainbow-waving grrl fans, also frantically penning a slew of let’s-fix-it fanfiction?

But beyond all those irresistible Sapphic eye-locks, those infamous “blue orbs met brown” (stop laughing, I’ve read it), what else makes a romance compelling?

Conflict is a must. Without conflict, hardship, and challenges, be they major or minor, characters risk coming across as fake, unrealistic, and living the Pleasantville life, never growing or adapting. Of course, if the ensuing character development involves moving from mutual hatred to mutual adoration, well, added author bonus points with rainbow glitter on top. (As long as they haven’t ordered the wedding celebrant and puppy within the first twenty pages.)

Several readers in my highly unscientific poll suggested it’s also preferred that the protagonists are conversationalists—be they witty, acerbic, barely conscious, or silly—they have to talk. Because we’re women, for god’s sake. Women talk. A LOT. So when that cute but stoic cop kisses her pretty BFF, it’d be nice to know her intentions. Like, sometime soon. Not in the epilogue. Even if it’s just to the whole squad room by accident in an All Employees memo. Hell, we’ll take it.

And then there’s the ending. It’s called an “HEA” in the romance biz, as in Happily Ever After. But what constitutes the “happily” bit? Confessions of love? U-Haul bookings? Wedding proposals? Sweet kisses?

The answer is all or any of the above. As long as we all get that warm, fuzzy glow of hope, that’s a winner.

Best-selling Ylva romance author Jae explains the concept best: “It does not necessarily need a ‘happily ever after,’ but it does need at least a ‘hopefully ever after.’ I need to be able to believe that these two will be able to stick together, even if the rest of their lives should fall apart.”

So there you have it. The winning formula: Burning looks, conflict, even more burning looks, conversation, center-of-the-sun-nuclear-meltdown-blistering-burning looks, and hope/happiness for the future. But that’s just one unofficial snapshot of lesfic-loving romance readers. What do you think? What makes a romance great? What is a romance fail for you, something that makes you want to throw the book against the wall in frustration? Let us know in the comments below.

And stay tuned throughout February as some of Ylva’s top writers do guest blogs on everything from the obsession with perfection in our protagonists’ looks and why writing sex is hard, to how we’re pushing romance into all subgenres. Also this month most of our romance titles are reduced in the Ylva Shop.

Lee Winter is an award-winning veteran newspaper journalist who has lived in almost every Australian state, covering courts, crime, news, features and humour writing. Now a full-time author and part-time editor, Lee is also a 2015 Lambda Literary Award finalist and Golden Crown Literary Award winner. She is author of The Red Files and Requiem for Immortals.