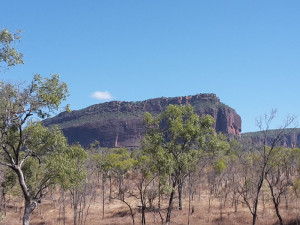 Ask anyone who is yet to visit Australia what’s the first thing that comes to mind when they think of the country. Kangaroos? Yup, probably. Sydney Opera House? High on the list for city lovers. The Great Barrier Reef? Yeah, now you’re talking. Or the Outback.

The Outback. It’s not actually capitalised, but maybe it should be, much as some Texans always write TEXAS. Outback Oz is a large part of the mystique and appeal of the country as a whole, and is shown in all its glory in most of the tourist ads.

I recently asked people to give me a one or two-word description for it. “Harsh” came up a lot. And “beautiful”. A city friend said “bloody awful” with a shudder. “Macho” came up a fair bit, as well as “dangerous”, and that segued into the usual chat about snakes and all the things that will kill you. We Aussies do like to perpetuate that, though. Pretty much everyone’s got a snake story or three. 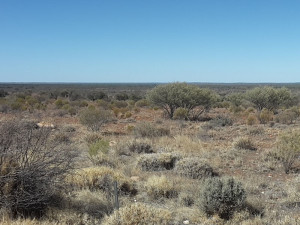 The Outback is all that and more. For starters, there’s no boundary, no sign saying “Outback 300 kilometres”. If you travel inland from the coast, it’s a gradual process. Green gives way to red and brown. Vegetation gives way to dirt. The cattle get thinner; the roos get more prolific. The wide highway shrinks to a narrow strip of bitumen with dirt edges. The road trains get longer; the settlements smaller. You stop the car and look around. There’s no one in sight. There’s no town, no houses, no sign of life. The road is eerily deserted. The land is flat. Maybe there’s a smudge of jump-ups on the horizon, maybe a line of white-barked gum trees drooping along a dry creek. The air is hot and still. A flock of galahs wheels overhead to break the silence. Or a station hand passes in his ute, and lifts a hand in a laconic wave. Then, you know you’re in the Outback.

You can experience this wide brown land as easy or as hard as you want. Visiting princesses can take a tour in an air-conditioned bus and stay overnight in a comfy motel. The hardy can camp under the stars and heat baked beans in the tin. Whatever your choice, the landscape is there to experience. It’s difficult if you want to live there. You can work on a station of course. Prowl the bar in an Outback pub, or eke out a living in a souvenir shop. The smaller towns find it hard to get doctors and teachers to remain. And, in a region where most everything comes in by road, it’s not a cheap place to be. But still—luckily—people live there, and many would wither and die if forced to relocate. 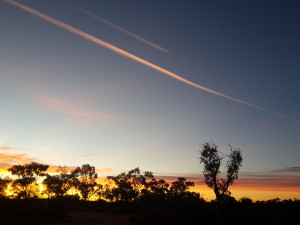 I don’t live in the Outback, but I do live in a rural area of Queensland. There’s only a couple of other houses in view, even though in thirty minutes I can be somewhere large enough to supply most things. I go to the Outback often. I like the hard way: camping, instant coffee from a camp stove as the dawn breaks. Travelling along station and desert tracks. Arriving at a small town (Population: 20) is the highlight of the day. Even better if it has a pub to cater for thirsty locals and travellers.

My snake stories? I trod on a brown snake in the dark once. And recently we had to call the snake catcher to remove a tree snake from under the DVD player where it was curled up all warm and snug, wrapped tightly around the cables. The catcher said it had probably been there for a week or so, since the last storm.
And a friend ran her car off the road when a passing bird of prey dropped a very dead snake onto the windscreen as she was driving home one evening.

But don’t let that put you off. The wildlife you’d rather not meet tends to leave you alone, and the thrill of seeing a mob of big red roos, or an emu and her chicks bouncing gaily along a red dirt road more than makes up the glimpse of a snake’s tail.

So give it a burl, come and visit Outback Oz. You might not want to leave.

Cheyenne Blue has written travel books and articles and edited anthologies of local writing in Ireland. She has lived in the U.K., Ireland, the United States, and Switzerland, but now writes, runs, makes bread and cheese, and drinks wine by the beach in Queensland, Australia. She just published Not-so-Straight Sue with Ylva Publishing.