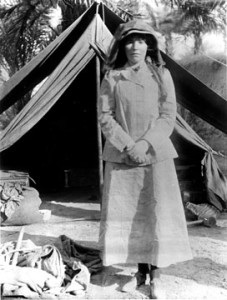 Sometimes ideas hit you. Sometimes they don’t. The latter sucks. When trying to come up with an idea for a crime novel or novella, the last thing you want to do is to sit around for weeks pondering dark subject matter trying to figure out thrilling plot structures, interesting character arcs, and a strong narrative thrust. You want to write. It’s a commission so get on with it.

Authors use different methods to break the writer’s block. The last time inspiration fled me I used the tried and true method of trawling through the newsworthy items of the rich and famous of the time. In this instance, 1920’s England. I started in the general direction of “What were the naughty gentry getting up to in those days” – well, far too much in my law-abiding opinion.

Soon research drew me towards an amazing woman, a one in a million character who shaped geography, history, anthropology, cartography, British foreign politics and diplomacy – yet she was far from famous. In fact, I had never heard of her. An idea began to germinate and the research became real fun. The black market for antiquities was at a high in the 1920’s, equalled only by the present day where discord in the middle east has opened up opportunities for this repugnant trade to re-emerge. Laws against looting had been in place since 1834 but proved hard to enforce. It seemed the ancient world still needed its champions.

Enter Major Miss Gertrude Bell, the British military’s first female intelligence officer. She was seconded to Cairo in 1915. Her singular influence on receiving this distinction lay in that she had unsurpassed strategic knowledge of Asia Minor and the Arabian deserts. ‘Bell’ maps, the maps she drew during her earlier travels were used by the British armed forces. 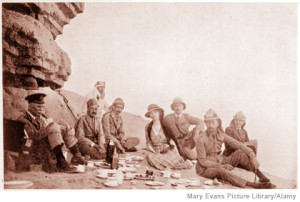 Bell was a traveller, who was fascinated by the culture, language, and politics of the lands she roamed. The aftermath of World War One resulted in the dismantling of the Ottoman Empire. Out of this chaos emerged modern Iraq (the meaning of the word iraq is ‘rooted’). Bell helped draw up the borders of this newly emerged country, advised it’s new king on appointing a government, and acted as an Iraqi administrator. She also set about protecting the wonders within this new country. She was on the board of the Bagdad Library (later to become the National Library of Iraq) and helped found the Bagdad Archaeological Museum (now the National Museum of Iraq).

Bell was active in her interests, attending excavations and becoming an expert in cataloguing the vast swathes of archaeological and historical data. Because of Bell’s foresight many artefacts from the Mesopotamian and Babylonian eras were preserved for academic research, and protected by stronger and more enforceable laws from the pilfering of men such as my imaginary Sir Wesley Clamp.

Gill McKnight is the author of Daughter of Baal, and Gertrude Bell was her inspiration for her novella set in 1920s England.