Dragons, queens and trans widows—Queer Science Fiction and Fantasy in YA 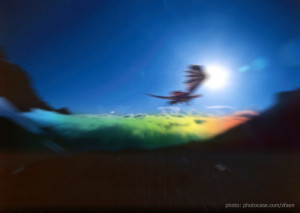 Fairy tales are the first place we learned as queer kids that we weren’t allowed to exist, that the people in charge of happy endings would rather create alternate realities where nobody was like us. I think this is why queer speculative fiction is so popular. I see so many people begging for lesbian, trans, gay, bi/pan, ace, nonbinary, and otherwise different characters fighting monsters or having adventures in space or magical kingdoms.

Now that we’re starting to get a wider variety of quality contemporary YA with a wider spectrum of ways to be queer, folks want to take that variety of representation into the world of superheroes, princesses, and warriors as well. Published queer SFF (Science Fiction and Fantasy) has been around for a while, but because of homophobia many times the relationships weren’t discussed openly in promotional materials and back-cover blurbs the way they are now, so we had to find them through word of mouth. Also, at this point an entire generation has grown up with easy access to fanfiction thanks to the internet, so we already know it’s possible–and we know what it looks like—for queer characters to fight aliens in space or learn to perform magic in a creepy castle.

Luckily, this year has more and more queer SFF YA on the schedule. I haven’t read any of these yet, but you may have seen Emily Skrutskie’s The Abyss Surrounds Us, Audrey Coulthurst’s Of Fire and Stars, Ella Lyons’ Marian, and C. B. Lee’s Not Your Sidekick mentioned before – and that’s just the f/f! I was invited to write a post for Ylva’s Young Adult month, so as a writer of f/f fantasy myself, I decided to showcase some f/f SFF YA I’ve enjoyed. Links go to my extended reviews, and everything has a happy ending.

Fairest, by K. S. Trenten. High fantasy novella in which Snow White, Sleeping Beauty, and Cinderella are involved in a dark love triangle. It’s about escaping toxic relationships and healing from the kind of pain that makes you hurt others, but it’s also a wonderful place where those of us who never got to watch all the princesses be beautiful together as kids can enjoy that kind of imagery.

Screaming Down Splitsville by Kayla Bashe. In an X-men-style universe, an escaped girl with superpowers goes back to the Evil Facility that tortured her to rescue the girl who was in the cell beside her so that they can be happy gay supergirls together. The main character is a cuddly, nurturing fat butch girl who’s still trying to find the value in her own powers, which she doesn’t think are as cool as other superheros’.

Colorblind by Siera Maley. This one’s paranormal, about a girl who’s got the awful gift of being able to see the age at which people will die. She falls in love with another girl who’s supposed to die by the end of the summer. Sorry for the spoiler, but the author managed to find a way to make this end happily—which I think you’ll agree that we need! Very sweet f/f YA with spooky trimmings.

Fierce Family anthology. This one isn’t explicitly YA, but it doesn’t contain erotica and many of the characters are teenagers or other young people. It’s a SFF anthology centering on positive depictions of queer families, and includes a nonbinary teenager in a space colony, a space pirate story where both the good guys and the bad guys are bisexual poly extended families, and multiple stories with two moms.

I have so many more f/f SFF recs beyond this, but many of them aren’t technically YA even if they’re teen-friendly, like Meredith Katz’s sweet lesbian android romance The Cybernetic Tea Shoppe. Here are some more recs for f/f SFF where the girls end up alive together at the end, and here’s the Goodreads list for f/f SFF coming out in 2016.

My books have been called everything from middle-grade to adult, so I never know where I fit on lists like this, but July 20 is my next release date. The Olive Conspiracy is a high fantasy adventure about a happily partnered lesbian queen trying to untangle a plot to wreck her country’s agriculture—a plot that may or may not trace back to the straight foreign princess she had a crush on as a teenager. The book has two happy and stable f/f couples, not to mention a dragon, some queer men, a heroic trans widow, a rescued kitten, and witches, and I hope to see you there!