Why we breathe life into LGBTQ+ YA fiction 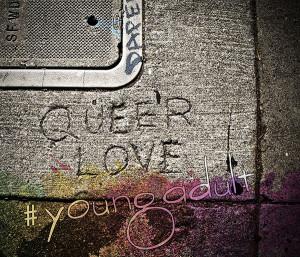 Every story has already been written. If you have formal education in reading or writing you’ve probably heard this before. So, if every plot has already been written, why do we still write? We write to tell our version of the story. There is a special bond between writer and reader, and it is ten-fold when it comes to lesbian, gay, bi, transgender, and queer (LGBTQ+) fiction, and even more so for Young Adult (YA) fiction. We often forget that the last few centuries of literature had an abject absence of lesbian, gay, bi, and trans characters. If a queer character did emerge, it was as a villain or cautionary tale. With the advent of e-reading and global shifts in laws, the LGBTQ+ community finally has hundreds of books about LGBTQ+ characters literally at their fingertips, and as with any great power, a great responsibility comes with writing LGBTQ+ YA fiction.

To understand why it’s so important to write meaningful LGBTQ+ YA fiction, take a moment and go back. Remember yourself when those feelings first started that made you realize you were different. Maybe they excited you, maybe they scared you, but the point is, they marked you. You had a secret. What is a secret, really, but a story told to one person at a time? Each LGBTQ+ young adult has a story. As writers of LGBTQ+ fiction, we owe it to these readers to reach past the barriers that contain them and share with them a story like theirs. This time, we tell the stories for them. We give LGBTQ+ youth characters they can see themselves in, characters they can look up to. The Cinderella story goes back almost a thousand years and is the most rewritten story in history, so why redo it again? Because until every story has been retold with an LGBTQ+ hero, we have not finished our jobs as writers or fulfilled our duty as messengers to our youth. Young people of the LGBTQ+ community need these heroes if they are to find the strength inside themselves to be who they truly are. Not all LGBTQ+ young adults are a happy-go-lucky teenagers who realize they are gay at seventeen, just the right age to be sexy to adult readers and to escape to college without really dealing with any of the backlash of coming out. Some kids are stuck with their secret or its exposure for years. So, write them young, write them angry, write them sad; just write about them. Many kids and teens still feel alone and scared, like prisoners in their own lives without a way out or end in sight. LGBTQ+ YA fiction offers a glimpse of what could be waiting for them beyond the four walls of their prison—be it in their minds, homes, schools, towns, or even their own bodies. Reading serves as a form of escapism, but we take for granted that this escapism can save lives.

I’ve met many writers who told me they started writing as a way to express themselves. They were shy and afraid to speak up. For others, it was worse. When I was 18, I had a friend kill himself because he was gay and couldn’t see that things could get better. When writing LGBTQ+ fiction, we have to forget about the critics who say it’s been done and reach out to young readers in a way we would have wanted to be reached out to. If critics say, “Don’t do the bullied, misunderstood teenager, it’s been done,” I say, do it. If they say, “Don’t give your characters a happily ever after, it’s cliché,” I say, give it. If they say, “Don’t write about coming out, it’s no longer an issue,” I say, write it. Write it until every LGBTQ+ young adult has an LGBTQ+ YA book they can relate to, because when we write LGBTQ+ YA fiction, we are not simply writing to entertain adult readers, we write to give strength and hope and love to young adults today. Let the friendless girl lust after the cheerleader, because it happens. Let the geeky guy fall for the football captain, because it happens. Most of all let your characters live and thrive and overcome obstacles, because it happens.

We don’t write LGBTQ+ YA fiction to break sales records, we write it to break down barriers and walls that hold our youth in. It’s about rewriting the story so that our youth can rewrite their endings. For too long have we allowed lesbian, gay, bi, and trans teens to feel alone; for too long have we stayed idle while suicide rates have risen; for too long have we allowed the voices of our youth to be stolen. We use LGBTQ+ YA fiction to give them back their voices. Through thousands of words and hundreds of books we give one united message: it’s okay to be who you are. Until every last LGBTQ+ teenager knows this, until they breathe it in at morning and exhale it at night, until they feel the legitimacy of their feelings and their thoughts and their rights in their bones, we must keep sending this message. There is no one book that will reach every individual, so we write and rewrite the stories, just like those who came before us, until every young adult can find that one book that speaks to them. Our responsibility when writing LGBTQ+ YA fiction is not to tell a story that’s never been told, it’s not to shock, it’s not to impress the critics; it’s to reach out through the pages with our words and send the message that so many of them are still waiting to hear: it’s okay to be who you are, there are others like you out there, and if you hang in there, you’re going to be just fine.

— Michelle L. Teichman, author of The Space Between, an LGBTQ+Q+ YA novel from Ylva Publishing