Currently, there are many conversations going on about representation in popular media for marginalized and underrepresented folks. Reading these conversations, I’m reminded of a conversation on ABC’s Scandal, when Olivia Pope’s father is speaking about his belief that his daughter must work twice as hard to be half as good as a white person. Olivia Pope and her father, for those of you unfamiliar with Scandal, are black Americans. I am not black. This point pushes against the privilege I possess as a white American hard. And it’s true. Still, despite the words not being about someone like me, or even for my ears, they resonated with me. Because this idea can also be applied to telling stories.

Writers whose identities exist within marginalized and underrepresented spaces constantly struggle with this same concept of working twice as hard to be half as good.

The work of a queer YA novelist is hard. It is a struggle to get your book published, or even noticed by reviewers once it is published. I know this struggle, I’ve lived it. Queer young adult literature is considered a niche genre when a queer person writes a novel about people who share their identity. I’m thankful to Ylva for being so willing to publish young adult stories that I would have wanted to read as a kid. I’m thankful to be a part of their effort.

Yet, I still feel the half-as-good burn when I see straight white people writing queer YA and being lauded for doing so in the press. I know that it takes the “safe” voice of someone in the majority to allow a window into a space that is not their own. But this is where I get stuck. Why is a straight white person’s version of what it’s like to be gay considered more valid than the voice of an actual queer person’s version of the story?

To me, this dichotomy, more than anything else, is the problem of representation in young adult literature. There are simply not enough diverse voices out there. Close your eyes for me. How many non-white YA authors can you name off the top of your head? How many queer authors can you name who actually write about queer characters? Queer people of color writing about queer people of color? Can you name more than ten? Five? Congrats, you’re way better than me.

The question of why this is the case sometimes eats at me. Is it because of the point Scandal made so eloquently? Is it my own privilege coloring my interpretation of these facts? A part of me gets stuck on the fact that so many of these novels written by straight white folks present a version of queerness seeped in tragedy. Being queer can suck, sure. As a queer person I feel I’m allowed to say that. But being queer can also be beautiful and happy and wonderfully loving. I feel this fact is lost in the “popular” queer young adult narrative, as written by most straight people. 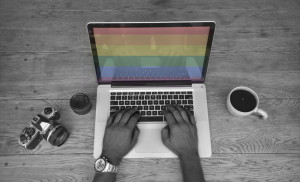 As a novelist, I’ve tried my best to write stories that negate this. The pressure on the queer writer to create something that is somehow better than the long string of tragic stories coming before, can feel insurmountable. Without the sadness that’s so engrained into the popular narrative, my stories feel half-as-good; because they don’t match how straight people—or even some queer people — see queerness.

To me this is a problem, and it’s one I don’t know how to fix. How do we, as young, queer writers, change the way queerness is examined by straight people? The only thing I can think of is to keep on writing. If I keep telling stories, and my stories keep inspiring others to create, maybe someday we can drown out the queer—is—tragic narrative all together.

Ellen Simpson, author of “The Light of the World” and story editor & social media writer for the popular webseries, Carmilla.