Food and Lesbian Fiction—When the Two Come Together 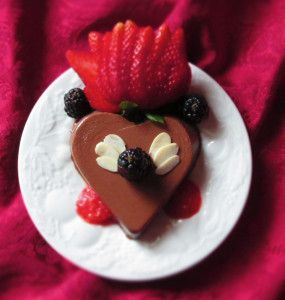 In case it’s not apparent from my writing, I’m obsessed with food. And why not? Food is the one thing in life that every single person on the planet needs to survive. The biological need for food knows no race, color, religion, creed, sexual orientation, gender, social or economic status, political affiliation, body type, or terroir. That’s why food brings people together. It doesn’t matter who you are, where you’re from, or where you go, when you visit someone’s home, food and drink are offered to you. Certain cultures take such pride in their hospitality that they’ve made a ritual of it, and it’s an affront if you refuse what is offered to you. It’s the binding tie between all cultures.

It’s this primal connection to food that makes it the perfect vehicle for all kinds of stories, romance and erotica in particular. Many a romance has flourished over a special meal, whether lovingly cooked by one partner for another, made together by a couple, or enjoyed together at a favorite restaurant. A specific food favorite or dislike is often on a couple’s list of things they have in common (“we love shrimp” or “we both hate cilantro, don’t we, sweetheart?”). Erotica takes the involvement of food to another level. If you’ve ever seen 9½ Weeks or Like Water for Chocolate, you know what I’m talking about. Even the sitcom Seinfeld broached the subject of food and sex. In one episode, George Costanza discovers that the best sex he could possibly have would be the “trifecta” of pleasures: a woman, a ballgame, and a pastrami sandwich. We are shown George rolling around under the covers with his girlfriend, listening to a game, then he pokes his head out to grab a bite of his sandwich. This to him is a great thrill. (This is not to say that I approve of the use of sports announcers for foreplay.)

Food is sensual in every possible way. It engages all the senses—sight, taste, smell, sound, and touch. Think about the things that might compel you to indulge in food: the look of a bright red strawberry; the flavor of salted caramel ice cream; the aroma of baking bread; the crackle of a barbecue; the feel of peach juice on your chin. Doesn’t that all sound enticing? In some cases, the imageries have a direct correlation to sex (although, if you’re partner is making crackling sounds during sex, I’d investigate further). The textures of food—soft, yielding, slightly bumpy at times—are like the textures of a lover’s body. The flavors of food—salty, sweet, tangy… Well, you get the idea. Some authors love to play with food and erotica in their writing. 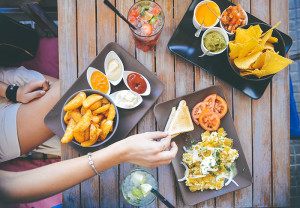 Which leads me to my next subject: vampires. Why vampires? In my opinion, there’s a perfectly natural and logical relationship between vampires and food. Historically, vampires have always been considered highly sexual beings, mostly due to the image of a male vampire penetrating a woman with his fangs and drawing blood. But there’s more to it than that. Vampires are mysterious, potent, fearless, tireless, forever young, voracious, and, therefore, sexy. And unless you’re talking about the hideous, monstrous vampire that is soulless and evil (usually depicted as having twisted, discolored fangs), people are drawn to them. They are alluring, sensual, and the prevailing fantasy is that sex with one of them will take you to heights of ecstasy that you’ve never known.

Doesn’t that sound like a fabulous meal to you? In traditional vampire lore, vampires don’t eat or drink, except blood. They don’t need to. All they need to survive is blood. But who’s to say that they can’t eat if they want to? There’s no real logical reason for a vampire not to eat and enjoy food. On the contrary, vampires’ senses are said to be heightened, so just like they would really, really enjoy sex, they could really, really enjoy a good meal.

R.G. Emanuelle is co-editor of the Lambda Literary Finalist anthology All You Can Eat: A Buffet of Lesbian Erotica & Romance, and the Golden Crown Literary Award Winner Unwrap These Presents. She is also a culinary school graduate, which is what inspired her to write her romantic novella, Add Spice to Taste, and Have a Bite, the first of The Vampires of Brooklyn Chronicles novella series. Now available as ebook in the Ylva Shop: Order Up. A Menue of Lesbian Romance and Erotica. You can find R.G. Emanuelle at Facebook, Twitter and Pinterest too. Please visit her Blog for more information.