Sunday Special: The Caphenon by Fletcher Delancey for $2.99 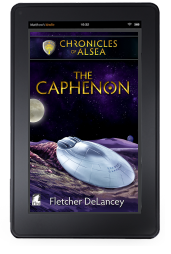 Today only, pick up the first book in an amazing sci-fi series at a can’t-go-wrong price. Buy Fletcher DeLancey’s The Caphenon – the book that kicked off the Chronicles of Alsea trilogy last year – for just $2.99.

For that smashing price, we promise decisive women captaining the ship, playing the game of political intrigue, and navigating the waters of intergalactic first contact. You won’t regret picking this series opener up. Give The Caphenon a try for a special one-day low, low price.

When a summer night like any other brings an emergency call sounds to Andira Tal’s quarters, the news is nearly unbelievable: 1) intelligent life in the universe does exist and 2) it’s crashing planetside right now.

Tal leads the first contact team and ends up rescuing aliens with a frightening story to tell. Captain Ekatya Serrado of the Fleet ship Caphenon tells Andira that she just crashed her ship into Alsea in order to save the planet from powerful aliens with advanced technology about to attack the planet. And they’ll be back soon. Alsea is now an intergalatic prize to be bought and sold by powerful galactic forces. But Lancer Tal won’t just accept Alsea’s fate. She’s prepared to do whatever it takes to preserve her world’s freedom.

Buy The Caphenon today only for just $2,99