A lesbian retelling of the Sleepy Hollow Legend 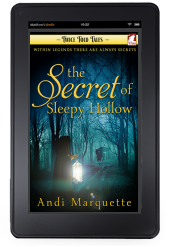 Ylva Publishing author Andi Marquette recently took time out from her busy schedule to answer some questions about her Halloween-themed release, The Secret of Sleepy Hollow, as well as her definition of a “jock-geek”, and about approaching Washington Irving’s nineteenth-century tale of Ichabod Crane’s mysterious disappearance like a detective story. Check out what she has to say below: you’ll have a blast.

What sparked the idea for this book?

OMG, get a beverage! Settle in! Let me tell you!

I’ve always enjoyed the story of the headless horseman. Washington Irving wrote the original, which is titled “The Legend of Sleepy Hollow,” originally published in 1820 as part of a collection of stories. So it wasn’t even a standalone, and probably the majority of people who know “Legend” have no idea what the title of its original collection even was (The Sketchbook of Geoffrey Crayon, Gent, in case you wanted something to bust out at cocktail parties). At any rate, the story took on a life of its own and became embedded in American folklore and culture. It is probably the earliest example of an American literary ghost story, so it has historical significance in that regard. Plus, it’s a great story. There’s a creepy glen, a creepy headless ghost on a horse, and a little bit of a love triangle, though Irving writes Ichabod Crane as kind of this bumbling, gangly odd bird who is vying with Abraham “Brom” Bones van Brunt for the affections of Katrina van Tassel.

What’s not to like about that? It’s sort of a chill-inducing tale, especially since Irving really played up the horseman and leaves the reader wondering what really happened to Ichabod Crane on that dark night over two hundred years ago. Was it Brom Bones who masqueraded as the horseman who scared Ichabod so badly he ran away? Did Ichabod die of fright? Or was there a real ghostly horseman? We don’t find out, but there have been movies and a TV show made based on the tale over the years with their own interpretations of the characters and story.

Anyway, back in March or so, I watched the 1999 movie Sleepy Hollow again—the one in which Johnny Depp plays Ichabod Crane and he’s an early forensic investigator, and he’s sent to Sleepy Hollow to find out whether there’s a headless horseman killing people or if they’re being murdered by live humans. There, he meets Katrina van Tassel and sparks fly between them. So I got to thinking about that romantic element. Irving didn’t really let Ichabod have much of a romance, and he wrote him as kind of a weird doofus, which made him an object of ridicule rather than sympathy. The Johnny Depp version has him ridiculed because of his science-y inventions, but he’s dashing and clever and approachable. I liked that version of the character, and I decided that anything I might write about Ichabod Crane would make him more sympathetic.

And I decided to do that—to write my own take on Sleepy Hollow. What if, I thought, there was a lot more to the story? And what if, in the current time, an intrepid graduate student in history went to the Sleepy Hollow Historical Society archives to see what she could find out? And what if that student had a connection to Crane? How might that play out, and what sorts of secrets might she uncover about Ichabod’s disappearance? And, by chance, what if our intrepid student meets somebody who sparks even more interest? That sounded like fun, that kind of story. So I got to work on it.

What do you like about your main characters?
The main character is Abby Crane, our intrepid graduate student working on a community study for her Ph.D. dissertation. She considers herself a geek, but she’s okay with that. She loves history, loves research, and spends a lot of time in the past, because that’s what you do when you’re a graduate student in history. I relate very well to Abby, because I, too, am a historian and spent a lot of time in academic settings doing lots of research in pursuit of graduate degrees. I love to do research, and I realized as I was writing Secret that I was seeing the historical clues through Abby’s eyes as she was going through documents, and I was pondering them with her, seeing how they fit in the making of secrets and legends. It was, for me, really cool to see Abby and Katie figure these things out.

Speaking of, the other primary character is Katie, who has longtime family ties to Sleepy Hollow. She’s also a graduate student, but at a different university than Abby. She does political science, though she, too, has a love for history. Katie is sort of a “jock-geek.” She’s outdoorsy and outgoing, a contrast to Abby’s more reserved, quiet demeanor, but she likes talking history, and she does with enthusiasm. I like Katie because she reminds me of a few of my friends during my grad school days (some of whom I’m still in touch with) and because she has a great sense of humor that meshes well with Abby’s, which is more droll/dry.

Did you have to do a lot of research for The Secret of Sleepy Hollow?
Define “a lot.” LOL

I research almost everything I write. For this project, I re-read Irving’s “Legend of Sleepy Hollow” and then researched Irving and the actual town of Sleepy Hollow, which renamed itself in 1996 in honor of the story. Its former name was North Tarrytown. I took creative liberties with my version of the town of Sleepy Hollow and local geography in my re-telling of Irving’s story, and I took creative liberties with the Halloween festivities in the area (Irving’s story isn’t set during Halloween, because Halloween wasn’t really recognized in the US until years later), but it made it more fun for me to set it at that time of year. I also brushed up on American Revolutionary War history in the area, because my secondary characters are extremely knowledgeable about local history, and I had to do them justice as they talk about it with Abby, who in turn discusses it with Katie. So, yes, this work required some research on my part. Was it “a lot”? I don’t really know what that means, because I do as much research as I feel is necessary to help create the story, and sometimes that’s twenty to forty and possibly more hours, sometimes it’s five to ten or ten to twenty. I couldn’t tell you how much I did for this story, because I don’t track my hours. Probably on the lower end of my scale, though, since I already had a background in some of the topics.

What role does your setting play in your novel?
Here it’s crucial because it centers on not only the village of Sleepy Hollow, but also the creepy haunted glen outside the village, which lends what we call “atmosphere” to the story. Katie and Abby not only spend time in the glen (at night, when it’s really creepy), but Abby also dreams about it while she’s in the village. The glen and Sleepy Hollow are characters in this story, and Abby and Katie interact with them throughout.

What was the hardest thing about writing The Secret of Sleepy Hollow?
I’d say that making sure that the creative liberties I was taking worked well with the secret. I knew what the secret was when I started writing, but I wasn’t sure what sorts of clues would lead Abby and Katie to figure it out. So this was like writing a mystery in a way, with the disappearance of Ichabod Crane as a two-hundred-year-old cold case. Any time I’m working with a history mystery embedded in a contemporary tale, I want to make sure that I get it right and that the characters are working within the parameters set by available documentation. So I did actually approach this as a mystery to be solved, which was unspooling within a ghost story spiced by romance. All those elements needed to play well together. I hope I was successful.

How did you celebrate when you finished writing?
I generally don’t do giant parties or anything when I finish a draft. Probably because I know that there will be re-writes to do, so it’s not really done. But finishing this draft sure did make me feel good. And relieved. I saved the draft in all the places I archive, and then I did a couple of fist pumps and yelled “YES” a few times. And then I went and relaxed. And like I said, I had to do two re-writes that involved adding another seven thousand words, so there you go. It wasn’t really done when I completed the draft. But I recognized that the brunt of it was, and that’s why I did the fist pumps and “YES-es.”

What do you do when you’re not writing?
I work a day job, so I do that. I also work out and take time to stop and smell the roses, if you will. I read, travel when I can, and watch movies and stream shows. I’ll hang out with friends, too. I always have something going on, so down time—lying on the couch to watch a movie or a streamed episode of something or read books and magazines—is a luxury that I appreciate entirely.

How long did it take you to write The Secret of Sleepy Hollow?
I totally thought this was going to be a longish short story. Then as I thought about it, I realized a novella was probably a better idea. As it turns out, it’s just about novel-length. Anyway, sometimes I’m able to get a draft of a novella/short-ish novel done pretty quickly. For whatever reasons, I did this draft in about two months, working about two to three hours a night after my day job and fitting in some time on the weekends. Basically, I was in a writing zone, even as I was working concurrently on two other writing projects. And then, of course, re-writes. Those took another two weeks or so. Like I said, sometimes things just want to get put on the paper. This was one of those instances.

Are you working on a new novel? What can your readers expect next from you?
I’m always working on something. Stay tuned for more sci-fi, romance, hopefully mystery, and just maybe some urban fantasy. Oh, and I’m also co-editing (along with author/editor R.G. Emanuelle) another romance/erotica anthology with a food theme. This one’s called Order Up, and it’ll be out next year from Ylva. The fun never ends!

How can your readers stay in touch with you?
THE INTERWEBZ!

They can go to my website and hit the “About/Contact” link and fill out the form, and that message then gets jetted over to me, easy-peasy. http://www.andimarquette.com

People can also find me at Women and Words, where I co-admin with fellow author Jove Belle: http://www.womenwords.org

Thanks, all! Thank you for chatting with us, Andi.

Buy The Secret of Sleepy Hollow now, exclusively at the Ylva online shop.

You can also hear Andi Marquette herself reading an excerpt from The Secret of Sleepy Hollow on Ylva’s SoundCloud channel.