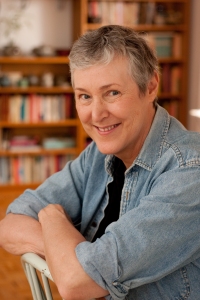 Today we have the pleasure to learn a bit more about Liz Bugg, author of  the Calli Barnow Mystery Series. Liz Bugg is another of those wonderful Canadian authors out there.

I always drink coffee in the morning. If I have anything to drink in the afternoon, I prefer tea.

What puts you in a bad mood?

Getting to the end of the day, and not feeling as if I’ve accomplished anything.

If you had a superpower, what would it be?

Ideally, I would like to be able to stop wars and illness, but that’s a pretty tall order. I would settle for being able to wave a magic want and help people cope with some of the horrible things that happen to them in their lives.

Where is your favorite place you’ve ever traveled to?

Without a doubt, I would choose Moraine Lake in Banff National Park in Alberta. A close second would be Salzburg, Austria and the surrounding area.

What would you do if you won the lottery?

I would buy a house, preferably in the country, I would give all our children an early inheritance, I would invest enough to keep me going, and I would give the rest to medical research and charities.

And now on to the writing-related stuff:

For how many years have you been writing now, and how did you come to it?

I’ve dabbled with writing my entire life: songs, plays, short stories. I only started to work at it more seriously around 2004, when I began to write my first novel, Red Rover. Even then I viewed it as a hobby that filled some of my summer vacation time. By the end of August 2009 I had finished a half-decent draft, and I had two choices: stop working on it altogether, or send it to a publisher. I chose the latter, and much to my surprise it was accepted for publication.

Why do you write? What does it mean to you?

I’ve always been happiest with creative/artistic endeavours. I grew up heavily involved with music, and then studied drama at university and theatre school, later working professionally. For me, writing is just another avenue through which I can express myself and communicate with people. It happens to fit well with my life at this time.

How long does it take you to write a novel?

It depends on whether or not I have a deadline. As I said, the writing of my first book was spread out in small chunks over many years. The next two took about six to eight months from first draft to submission. Then of course, there was the time spent on revisions 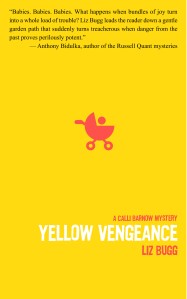 after getting editorial feedback. I’ve never written full time. I’ve always had other things on the go as well. Even though I could be writing all day, every day, I don’t work well that way.

How much time per week do you spend writing?

I don’t have any specific amount of time that I set aside for writing. When I’m really working on something, especially if I have a deadline, I can easily spend forty or more hours on it. If I’m not in the middle of a project, some weeks I might only write for a couple of hours, or even not at all. Since last April, when Yellow Vengeance was published, I’ve done some commercial writing, but very little creative writing. I have, however, in the last few months spent quite a bit of time on promotion. Most writers that I’ve talked to agree that the amount of time we have to spend on promotion really eats into what could be writing time.

When and where do you write the most?

I do my best writing in public places like coffee shops or libraries. I don’t like to write after the sun goes down.

How would you describe yourself?

Based on what others have said I’m hard-working, conscientious, independent, creative and committed to family. I’m also very stubborn, and I really like to be in control. If anyone is interested in astronomy, my birthday is on the cusp of Sagittarius and Capricorn–those attributes describe me quite well.

How much of yourself is in your characters?

Calli Barnow, the main character in my mystery novels, has some similarities to me. Although our lives past and present are very different, we share some opinions and attitudes. 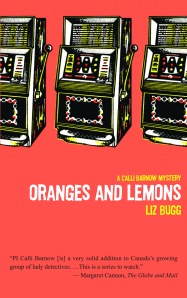 What do you find the most challenging part of writing?

For me just getting started to write and keeping at it are the hardest things. I’m not a big fan of sitting still for long periods of time.

What are you reading right now?

What do you think makes a good mystery novel?

I like a mystery novel that is realistic from the point of view of plot and characters. Coming from an acting background, I really appreciate well-rounded characters that have lives beyond the solving of the crime.

What advice would you give new authors?

Push yourself to improve, don’t be afraid to take risks, and be true to yourself in everything you write.

What are you working on right now?

I’ve started work on a couple of short stories. I also have an ongoing project that involves my grandmother’s memoirs.

What future writing projects can we look forward to?

That’s a big question mark for me at the moment. I have some ideas of what I might like to do over the next couple of years, but no definite plans.

Thanks for the answering our questions, Liz.