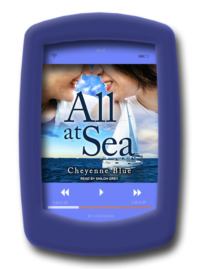 All at Sea (audiobook) by Cheyenne Blue

An enthralling, opposites-attract lesbian romance about what lies beneath.

Stevie Sterling is having a day from hell. Snubbed—yet again—by her unsupportive parents, she runs out on their posh party and takes refuge on a deserted yacht. Waking the next day with the world’s worst hangover, Stevie finds herself far from shore.

As if being trapped on the yacht in only her party dress isn’t bad enough, Stevie’s frantic that she’ll miss the first day of her new job as a nurse. She has so much to prove in her career—to herself and her parents.

The yacht’s cute but unimpressed captain, Kaz Malone—an eco-warrior who hits the seas with Sinbad the cat—is on a mission: There’s a nuclear-waste-dumping tanker to harass.

Kaz is as single-minded as she is stubborn and she’s not about to turn around for some stowaway with a new job. Hell, no. Saving the planet comes first.

But perhaps there’s more than one way to a destination? 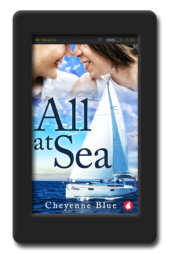